It was a nice treat today to be able to sleep in for an extra half hour.  We had a delayed opening due to more snow and ice overnight making the roads unnavigable this morning.  I got to put in a full 45 minutes on my bike and still managed to get to work earlier than necessary.  Our students started taking the PARCC test today which made the delayed opening even more chaotic.  Buses were late and schedules had to be changed, but things settled down fairly early.

I put together some little stress relief packages for the testing staff which I'll show later this week, and while I was preparing them I wound up with a lot of cotton string scraps in various colors.  I grabbed the variegated blue scraps and headed up to the stamp cave after school to make this. 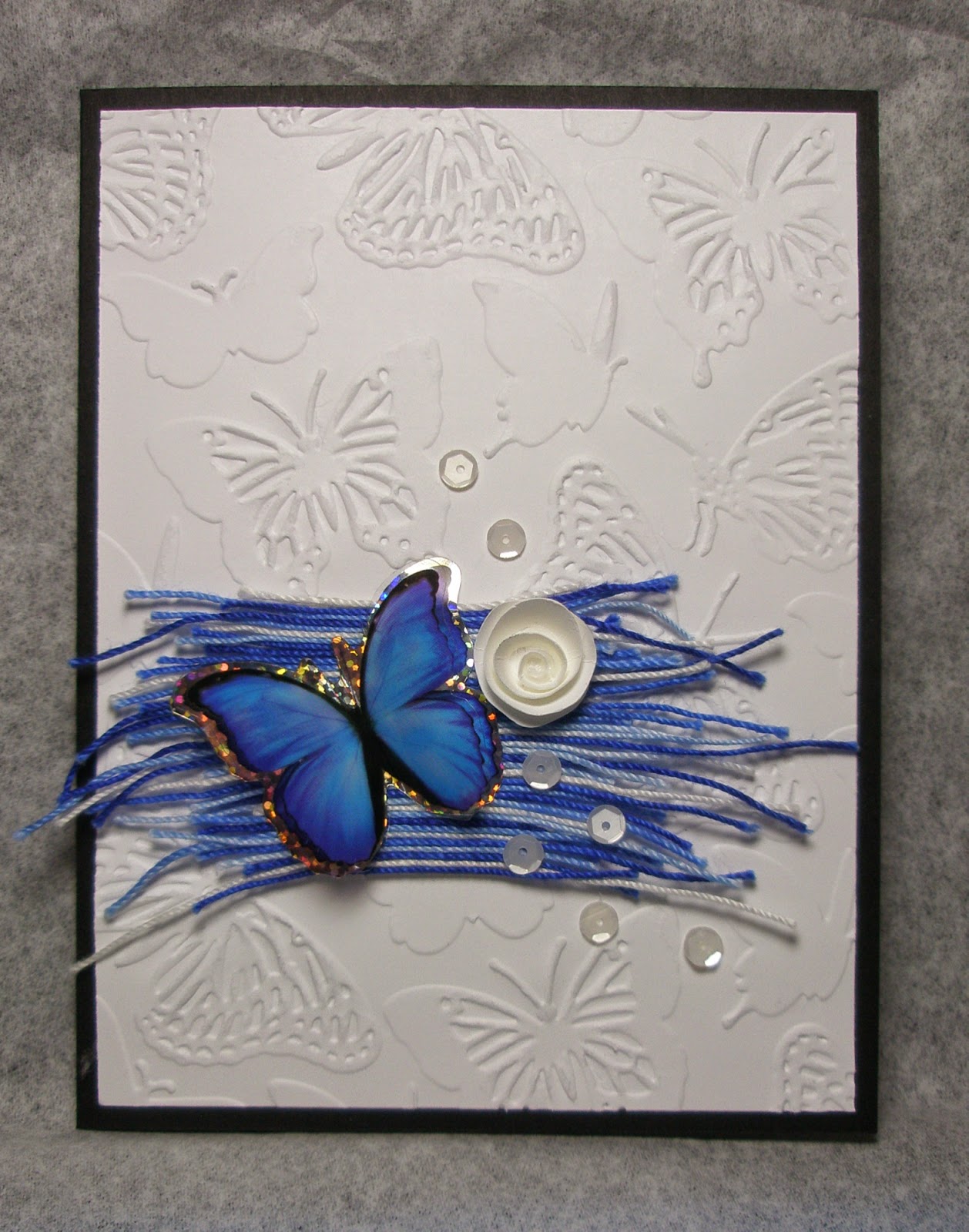 I took a piece of 1" wide double-sided tape and laid the strings over it leaving the ends all different lengths.  I used a butterfly embossing folder for the white panel and then added the string piece.  I searched my shelves for something to add to the top of the string piece and came up with a package of butterfly stickers that I got at the $ store awhile back.  The colors matched the strings.  Then I found a rolled paper flower to add to that and decided to add some white sequins too.

HWNSNBP asked what the card was for and I told him it could be for anything except maybe a sympathy card.  It's nice sometimes to just create something that is not earmarked for an current occasion just to have on hand. 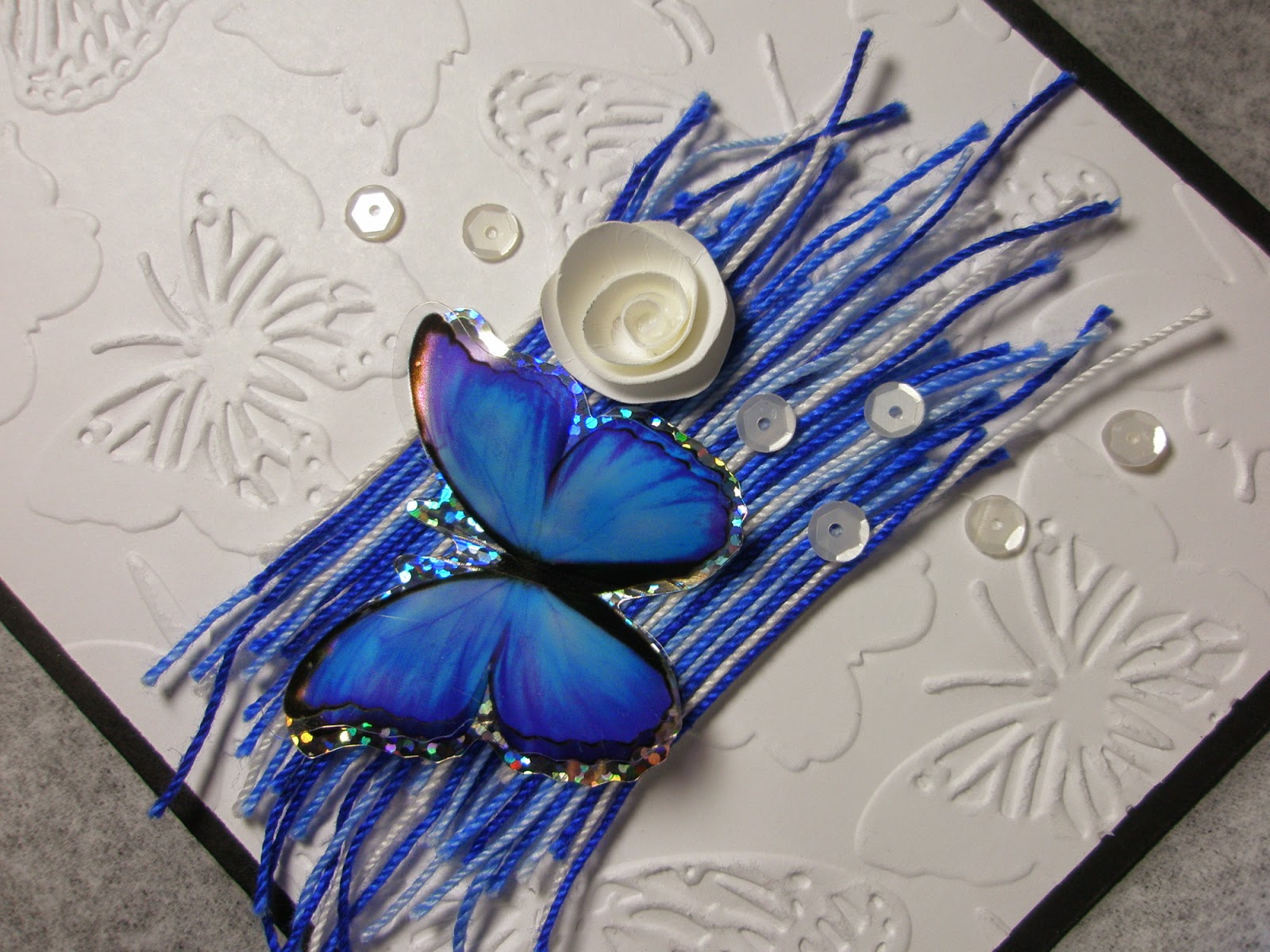 No good segue here between subjects.  Just going to show my tangles for the month of February. 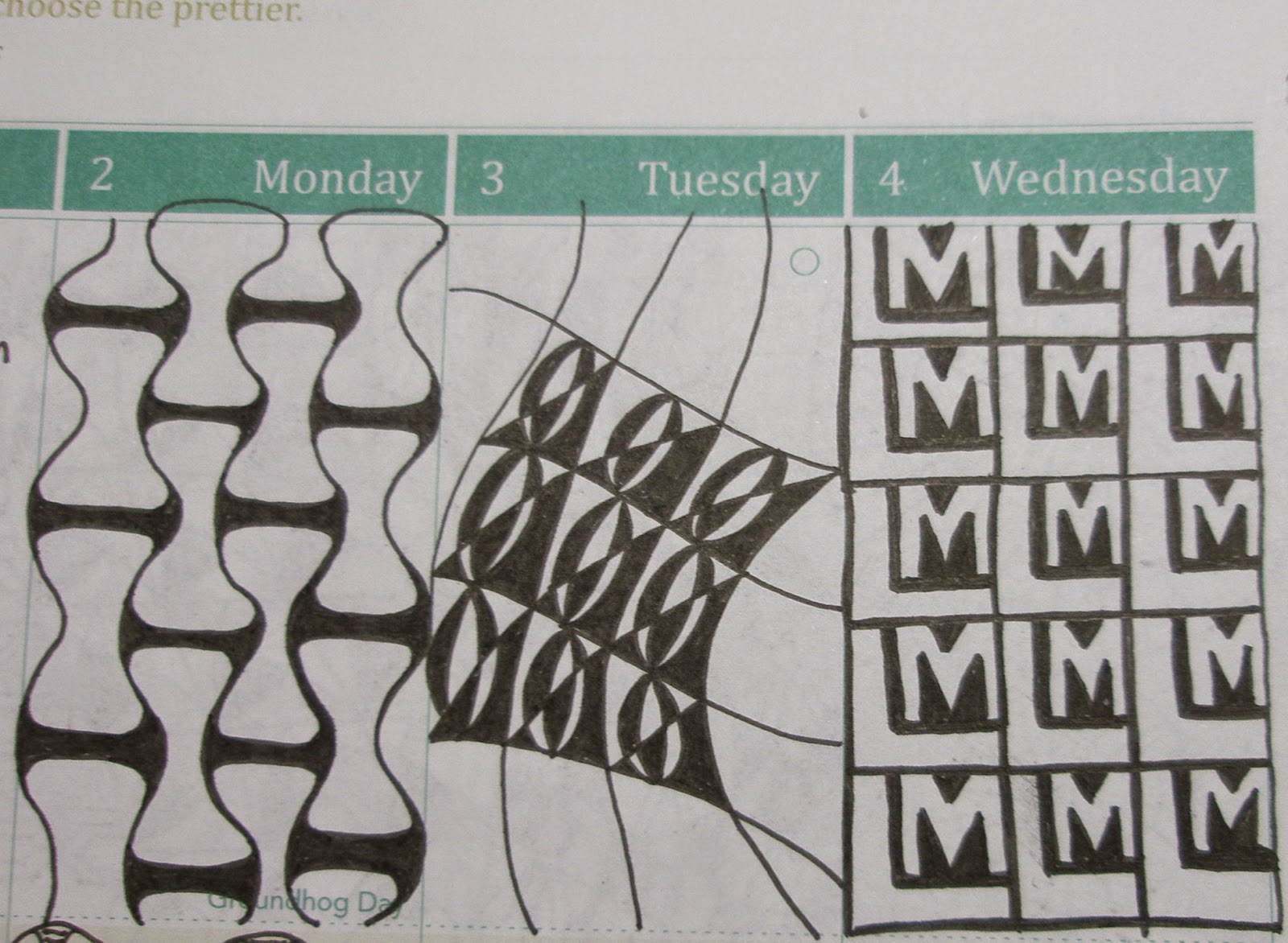 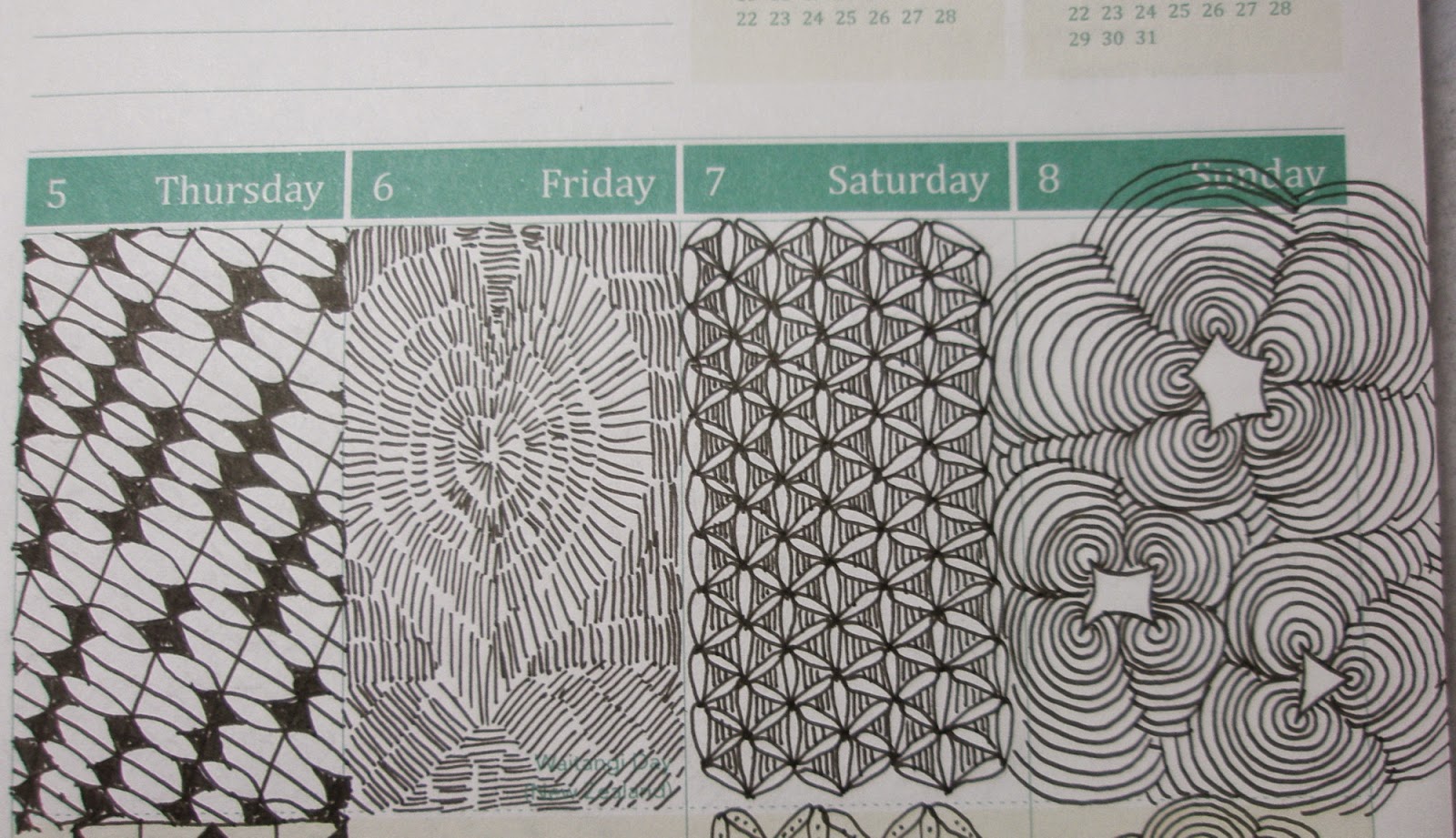 I decided to add color to the Valentine's week tangles below and also discovered that I had inadvertently forgotten to tangle the 15th.  I'll have to go back to that later this week. 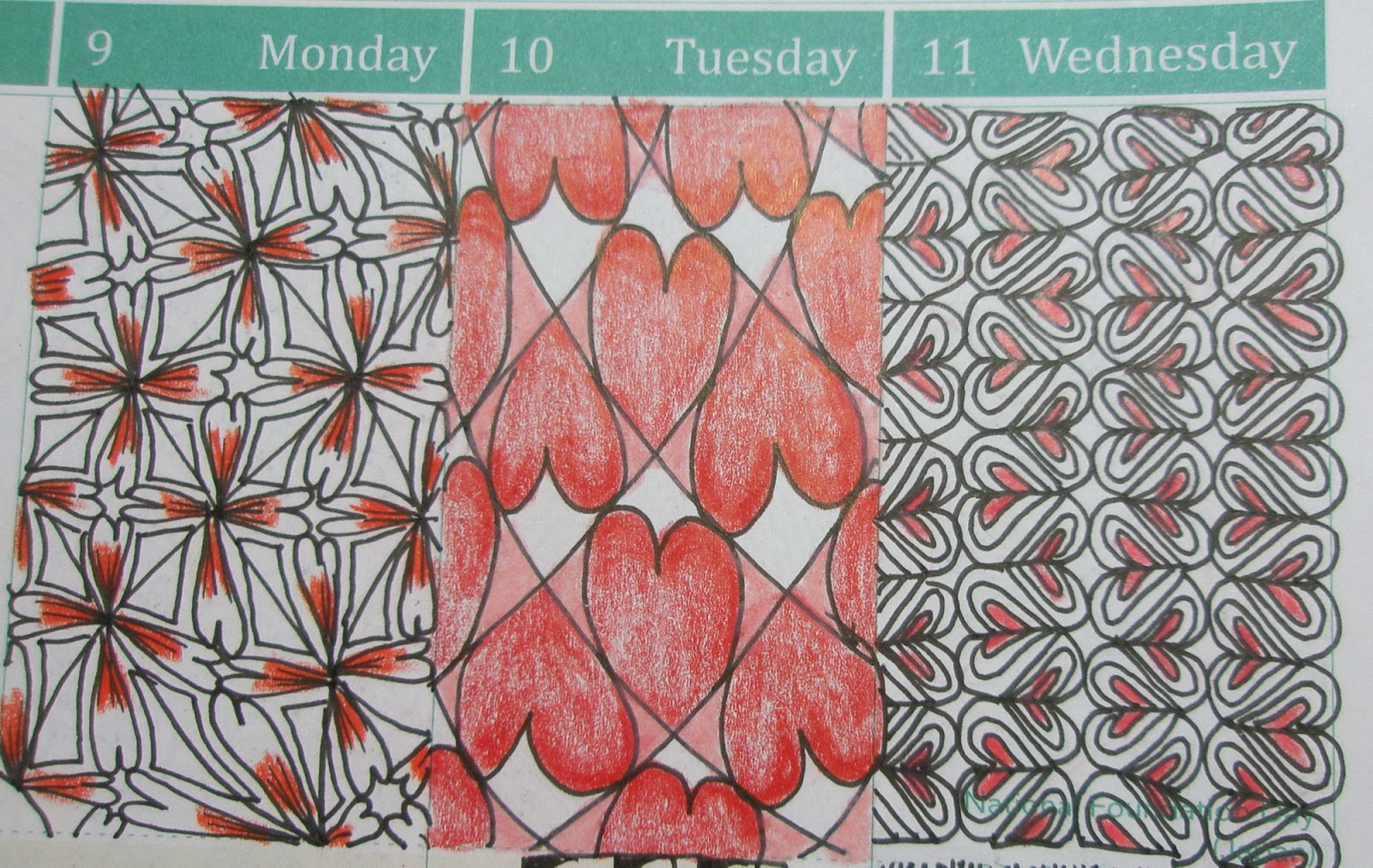 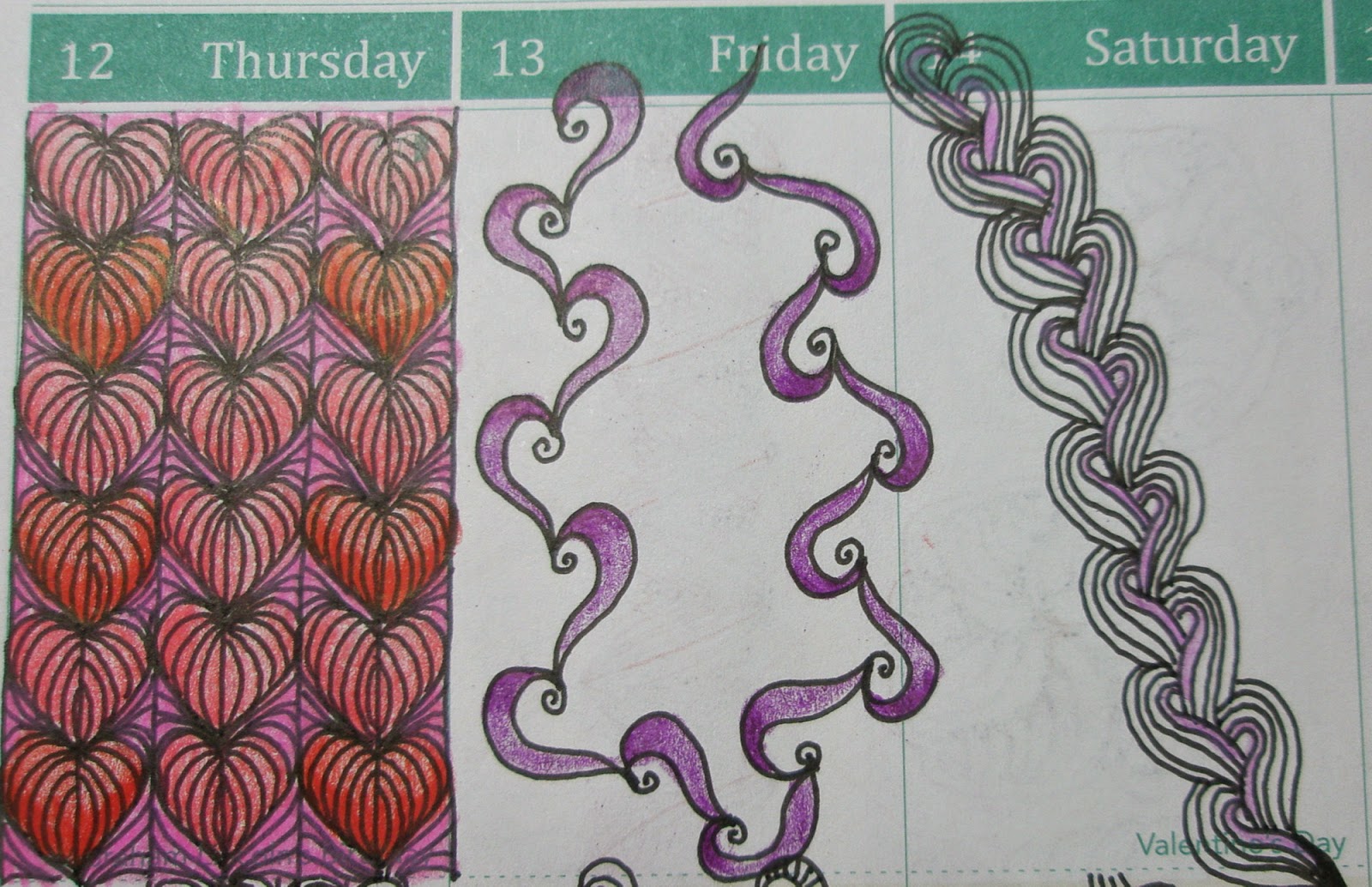 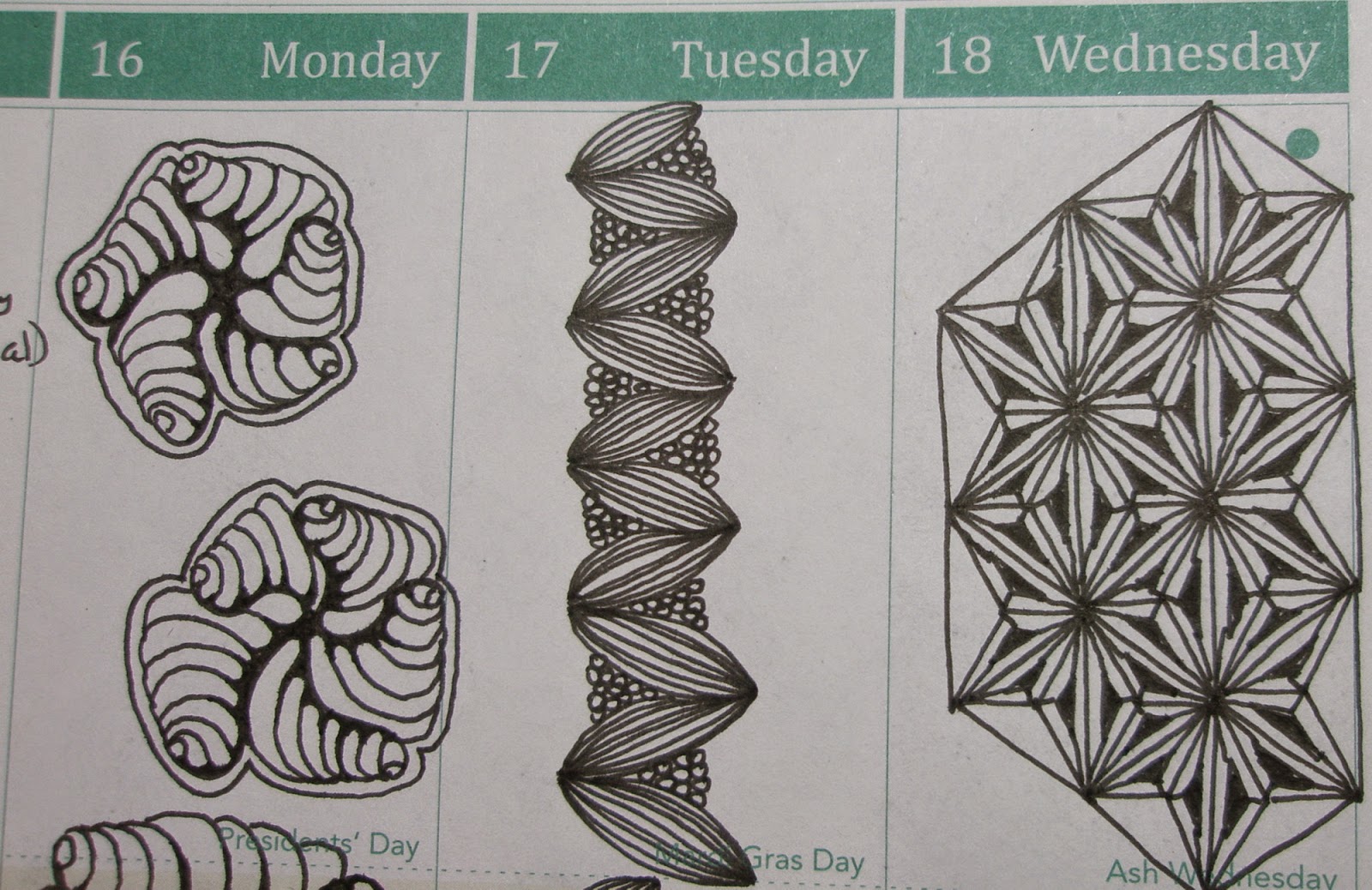 The tangle below on the 22nd is an original and was based on one of the props/posters that I saw during the Red Carpet event prior to the Oscars that night.  If you look carefully you might see the envelope which was done in gold on the poster.  I'm naming it Oscar Envy. 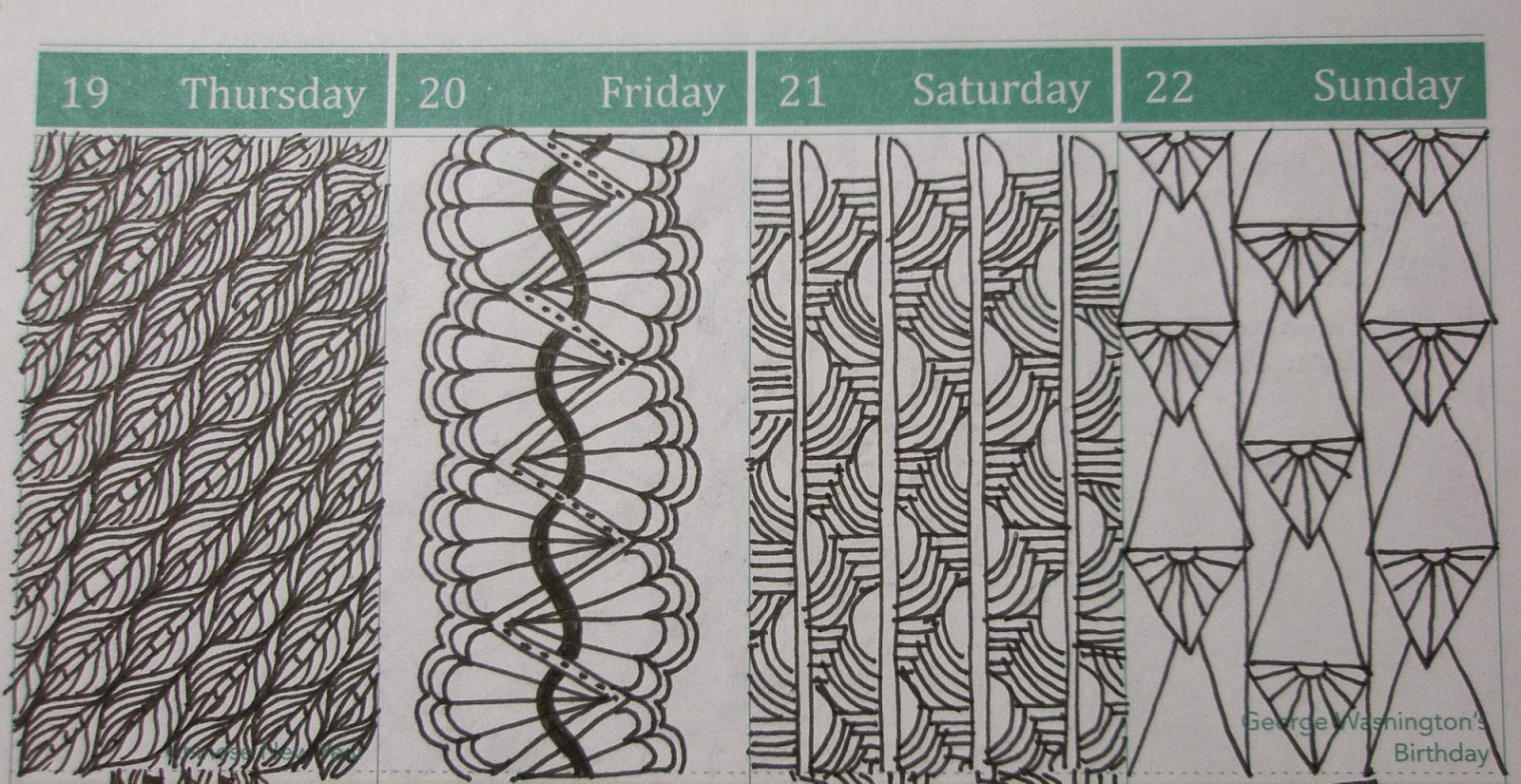 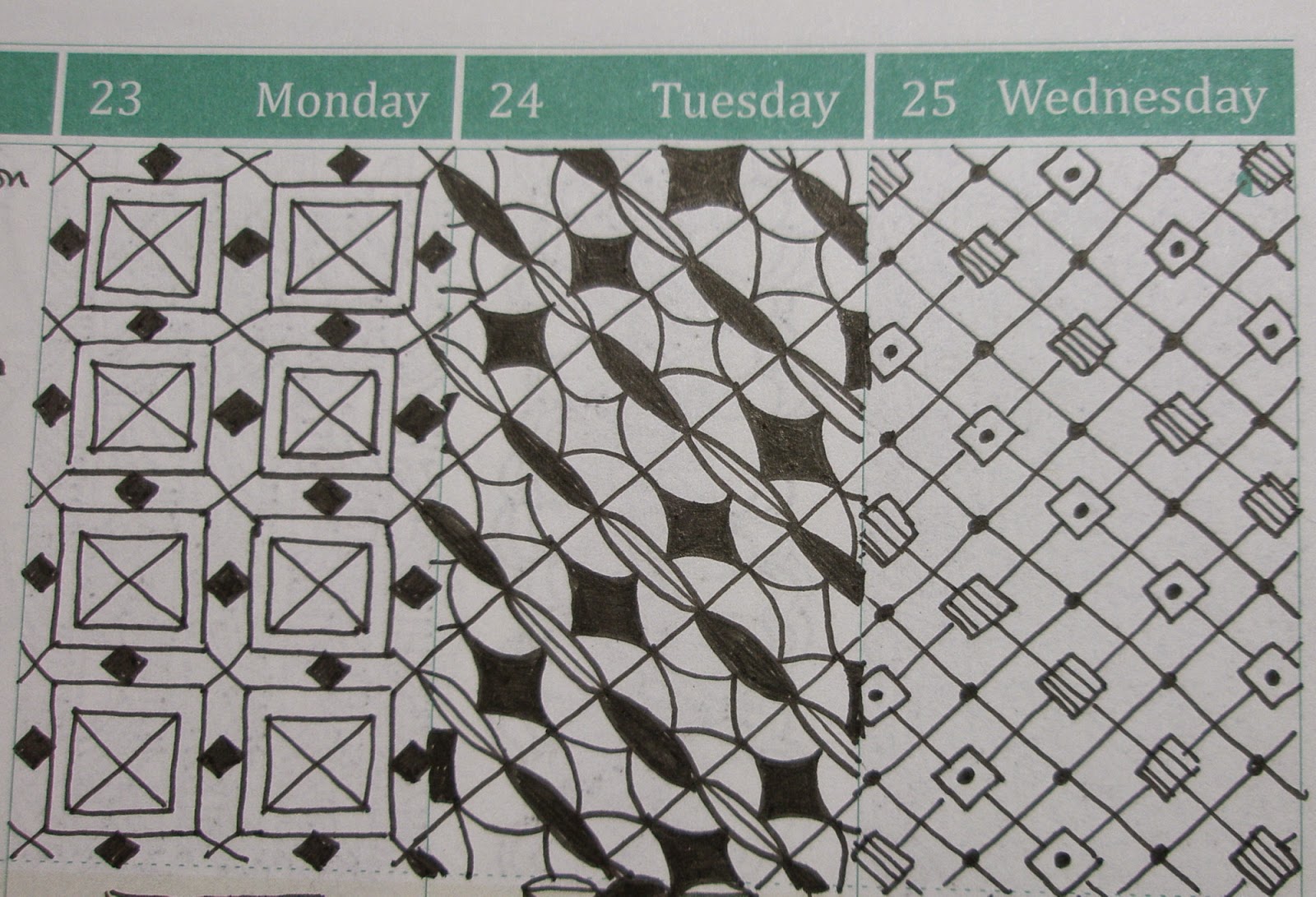 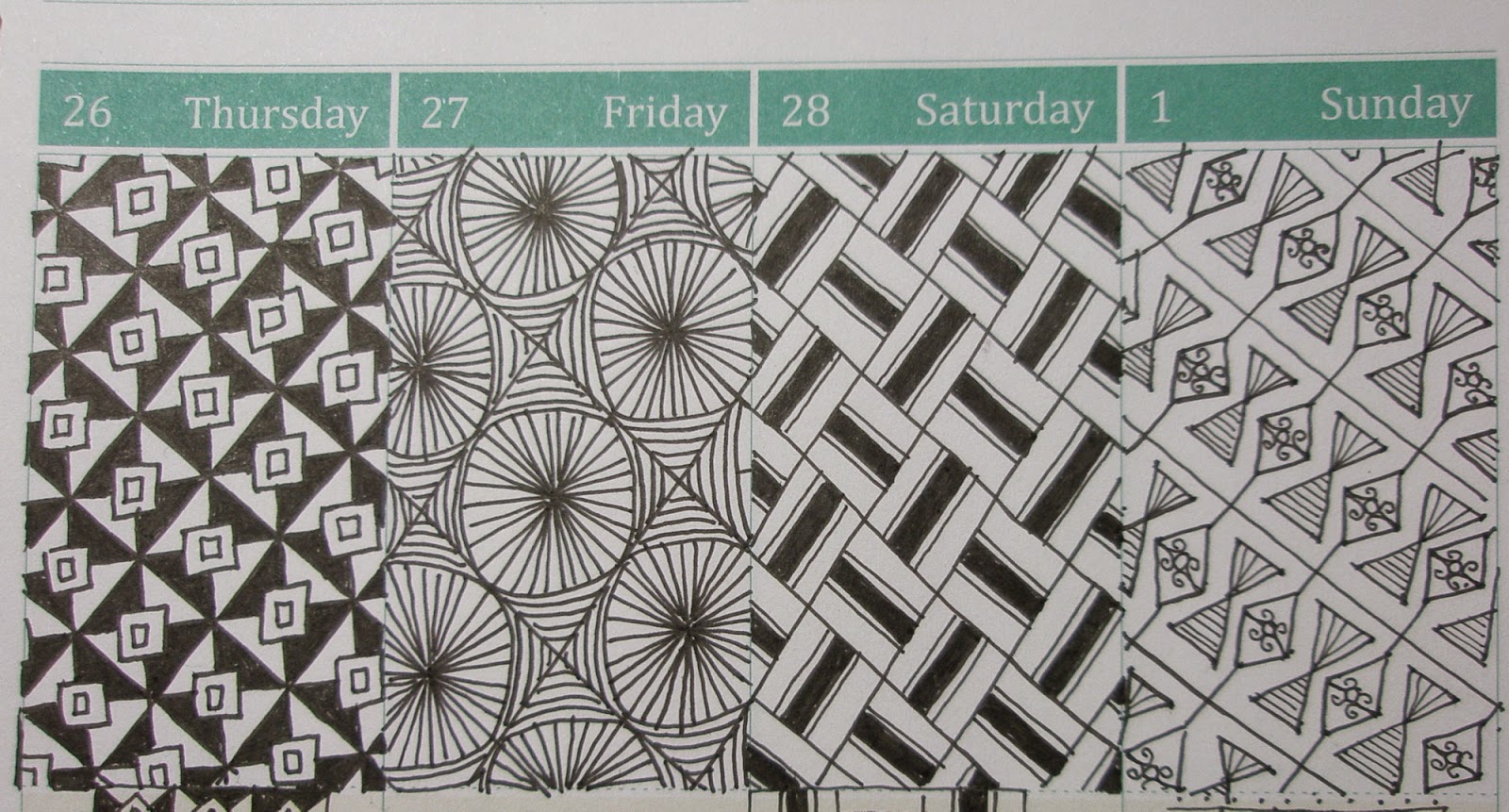 I'll have to come back tomorrow with my finished February work calendar.  I forgot to bring my little point and shoot with me today and the cell phone pics just did not work out.

If you want to know any of the tangle names, leave me a comment or drop me a line and I'd be glad to let you know.
Posted by Lorraine at 11:33 PM

Email ThisBlogThis!Share to TwitterShare to FacebookShare to Pinterest
Filed Under: Zentangles