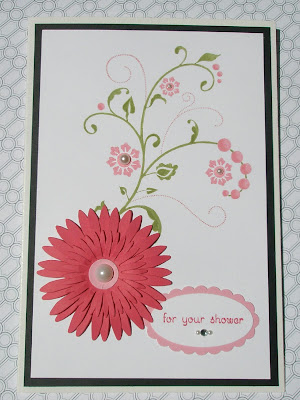 One might think that that is a DIY title, but the shower does not refer to the one in our home but rather the bridal shower for one of our good friends' daughter.  She loves the color pink and there were pink daisy-like flowers on the wedding invitation so I used my daisy die to create my own flower from the new Strawberry Slush CS.  I had to add this portion of a die cut doily to the back because I apparently wasn't as careful as I thought and got ink on the back of the card base.  You know what they say about mistakes being the opportunity for embellishment! 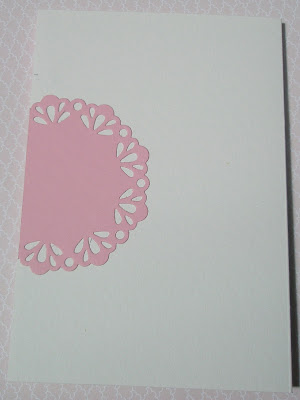 As promised, I said I would show before and after pictures of our floor project.  You will see that we have an open layout plan of the main part of our first floor.  This is the view from the dining area to the living room area.  The double-hung windows open up to the front porch.  The rug is a very faded shade of dark rose and you can probably see where the furniture was by the difference in the color.  (And the wall are not pink, they are painted with several shades of tans (biscuit and bagel are the names) and I used one of those split rollers that blends the paint, or rather, makes it look like very soft sponging.) 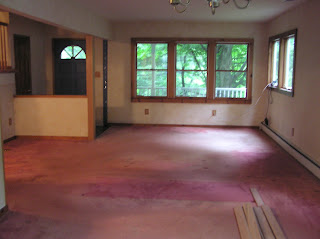 This is the same view with the wood floor unfinished. 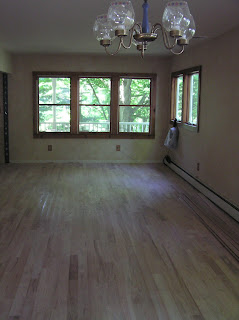 And now the finished floor. 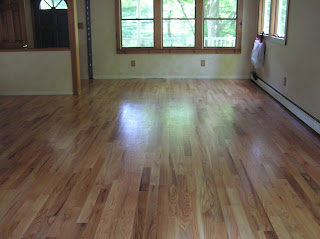 This is a more angled view which shows the stairway to the second floor and the new opening for the kitchen mid progress. 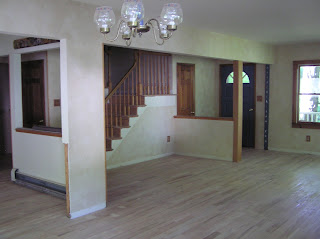 And the finished floor and stair treads from this angle.  We will have to paint the risers on the stairs to match the trim.  (Hopefully this will be done before too long!) 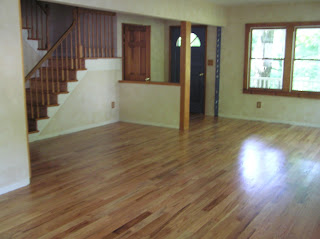 This would be the view from the living room to the back of the house (the dining room) and on the right is the kitchen with the two half walls. 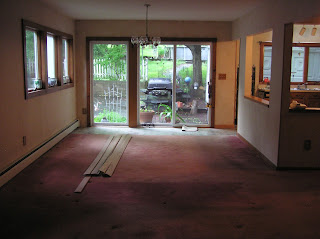 I wanted the half wall to the dining area eliminated and we are contemplating putting in a kitchen island instead of having the two tables again (the kitchen and dining room tables so close in proximity are really a little redundant). 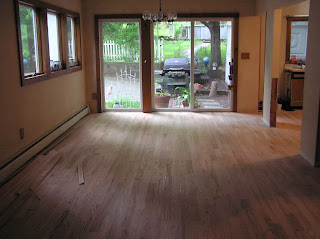 It opens up nicely to the kitchen now and the lower portion of the walls will have to be refinished. 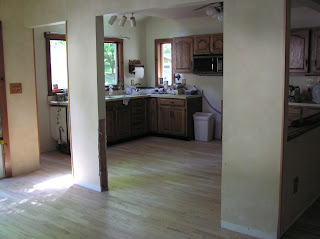 Here the floor is finished but the trim in this picture is not yet up.  It has since been done. 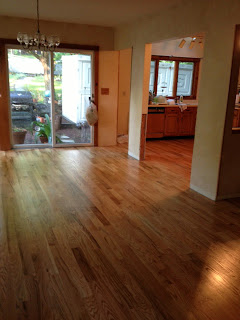 If I were standing at my sink and looking into the rest of the house, this is what I originally saw.  (The floor was linoleum.) 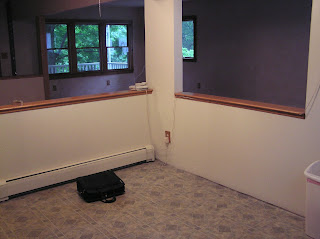 Looking into the kitchen before (the stove doesn't normally stick out like that, we were waiting for someone to come help disconnect the gas line so we could take it out). 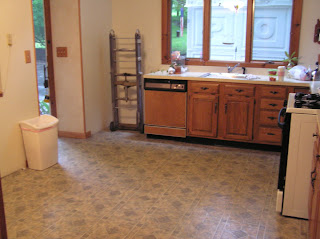 With the unfinished wood floor. 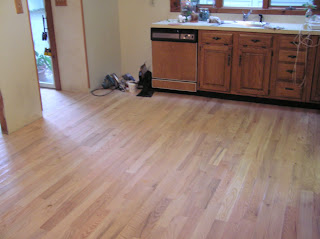 And with it finished. 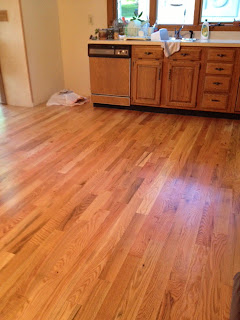 I love it.  I don't love the smell of the finish which is still lingering, but I love the floor.  It's a 1000% improvement on the faded floor and time-worn linoleum.  The floor extends to the hallway which you don't see in these pictures, the stair landing, and the upstairs hallway also.

We've brought in the furniture (which will hopefully be replaced soon if I can decide on what I want to replace it with) and have lots of incidental "stuff" to go through.  That is the overwhelming part.  I had just gotten to the point in the stamp cave where I had some free space and it wasn't as cluttered, but there was a small folding table that was in the dining room where the wall is no longer and under that table were storage boxes full of, wait for it, ................craft supplies.  They had to be moved upstairs and I will be going through all that stuff to see what I should be keeping and what just has to go.  I don't think I have enough hours left in my lifetime to use it all.

Gotta run for now.  Hoping my creativity mojo will be back with me come July as I have a lot of catching up to do!
Posted by Lorraine at 1:33 PM 3 comments:

Email ThisBlogThis!Share to TwitterShare to FacebookShare to Pinterest
Filed Under: Ramblings in Photos, Shower Cards 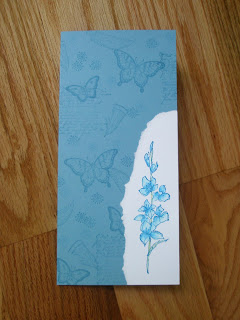 Has it really been almost half a month since I posted last?  These past few weeks have been crazy for us.  We had to empty out almost our whole first floor of the house so we could have new floors installed.  Hardwood floor(s) that I've dreamed about and yearned for for years.  Well, they didn't come easy and I will show some before and after pictures soon, but you can see a sneak preview above as I used the new floor as a backdrop for my very sorry looking card.  I just felt I had to throw something together the other night and I'm afraid it looks like I threw it together.  Oh well, my mojo will return soon, I hope.

Being displaced from our home for a few days while they added three coats of urethane, we spent one night in a local hotel and then took advantage of having the condo and headed down there for a couple of days.  Unfortunately, Mother Nature dumped quite a bit of rain on us which had HWNSNBP heading back to the house to pump out the basement.  Shall I also mention that he had to crawl through the basement window to do all this because he could not walk through the house because of the drying floor.

Then when he returned to the condo on Saturday, the moonroof in the car became possessed and opened all by itself and then wouldn't close.  At the direction of the car dealership, we headed to HD to buy some plastic and packing tape to cover it until we could get it to them on Monday.  Items all picked out and paid for, we headed out to the car and wouldn't you know it, it started raining. 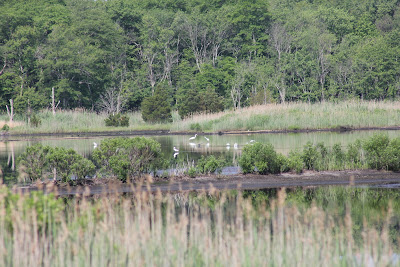 I tried to hold a large towel over our heads, but my arms were getting tired so I grabbed the umbrella that was nestled next to the passenger's seat and opened it up.  I felt like I was riding in a clown car down Route 9.  With the umbrella pushed up against the opening I'm sure that people saw it popping out.  The next morning, it became possessed again and closed and opened several times before finally closing for good.  We kept the piece of vinyl floor runner we had taped to the top of the car there and when we returned home on Sunday afternoon, dropped it off at the dealership.   Of course, since they could not duplicate the problem while they had the car, they could not fix it, so I now drive in fear that at any given time, the gremlins will take it over again.  I just hope it's on a sunny day! 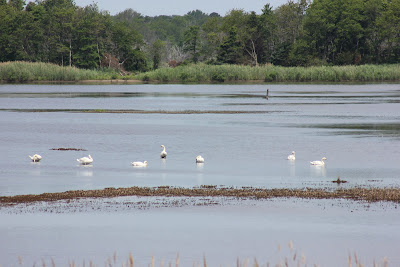 The pictures of the swans and herons above were taken after the rain, but you can see that the water level in the refuge is still low.  We're not sure whether the sand that was brought in with Hurricane/Super Storm Sandy has obstructed the water getting back into this area or not.  It seems that way though.  Below is the Canadian Goose family that we've seen in the area since mid-May. I was on a bike ride and on my way back to the condo when I saw them and I really didn't have the right lens on the camera for such a close picture, although the goose on the right, which I'm assuming is the gander, was not happy that I stopped this close and had started to walk towards me, so I did not waste any time moving on. 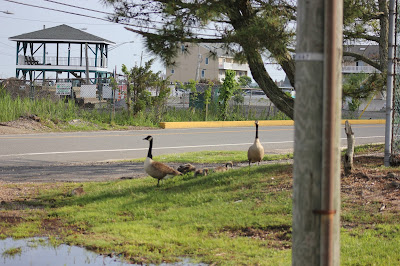 Costco had my favorites - Ranier cherries and yes, I ate the whole two pounds of them myself and enjoyed every last one.  I'm hoping they'll have more soon, but I know the season for them is very short. 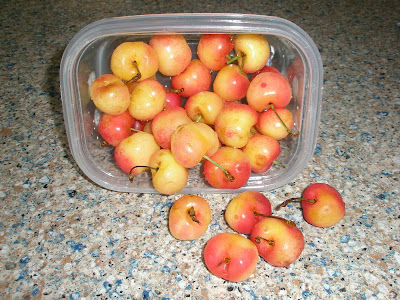 Sunday morning, HWNSNBP, our friend JT, and I went for a long bike ride.  It was a beautiful clear and cool morning with just a bit of a wind.  JT and I took a little extra trip to the street where we've seen the swans before and found that that clear patch is now overgrown with tall grass.  However, on the way back, a gentleman had gotten out of his car to rescue this turtle from getting hurt crossing the road.  Funny, that we had just rode past it and never noticed it. 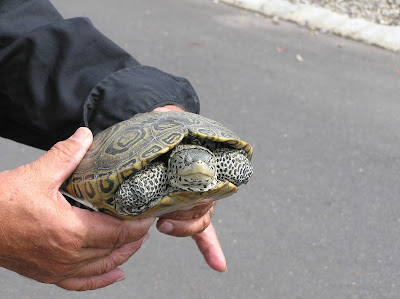 We also had two large trees removed from our front yard this week.  They were very close to the house and had been dropping branches for years, and with all this "wacky weather" we've been having, we decided that it would be a good idea to get rid of them before they fell on the house.

While I was sweeping off the porch, I came across this spider web on one of the metal chairs which had been decorated with the sawdust from the trees. 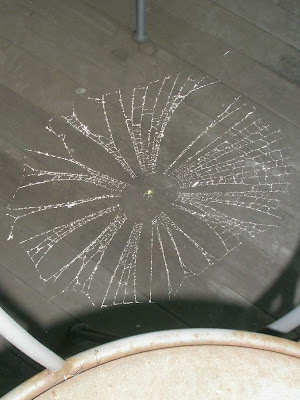 We get to move the furniture back into the house this weekend and I'll be trying to remember where I put everything else that didn't go into the POD.  That may take a while as I need to evaluate what is going to stay and what is going to go.  That is never easy for me, but seeing the downstairs empty, I am motivated to keep it as uncluttered as possible.  Wish me luck!
Posted by Lorraine at 10:11 PM 2 comments: