Thank you notes - working in a school office the holidays are full of little unexpected gifts like cookies, candy, etc.  I think it's important to thank those that take the time to remember us.

I had a few after Christmas purchases and one of them was a couple more rolls of the birch bark wrapping paper from Pier One on sale.  (I may even use it to wrap some gifts next year!) It makes a quick and pretty (I think) background on cards. 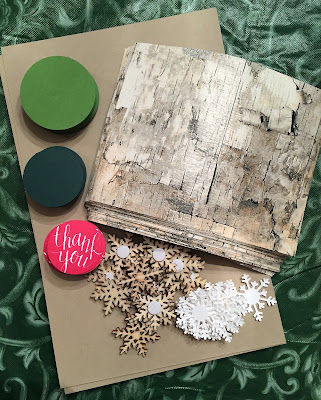 Along with some punched circles in different sizes, colors, and one even stamped, I used some wooden snowflakes and when I ran out of those, some punched snowflakes. 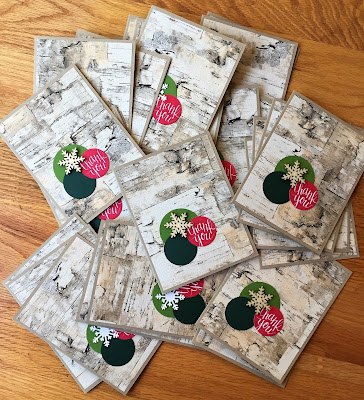 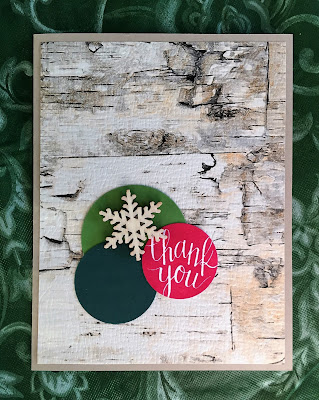 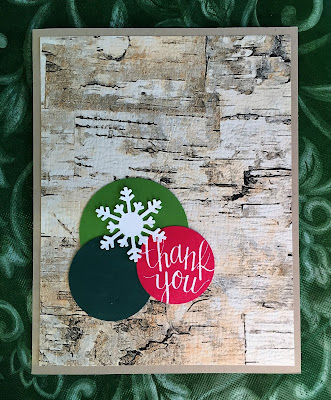 HWNSNBP loves this cake and I didn't have time before Christmas to make it but managed to get it done the day after and we've been enjoying it all week.  (Cranberry Cornmeal Cake by Giada DeLaurentis) 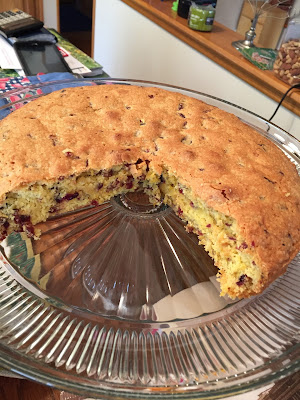 This is the mess that's my work space right now.  I'll be doing some major clean up work come the new year. 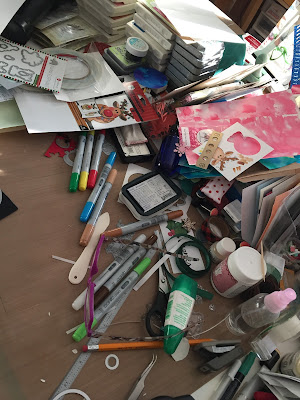 And I promised a look at the ornaments that I finished for the staff at school.  I couldn't find my gold cording so I had to resort to fishing line.  They seemed to like them. 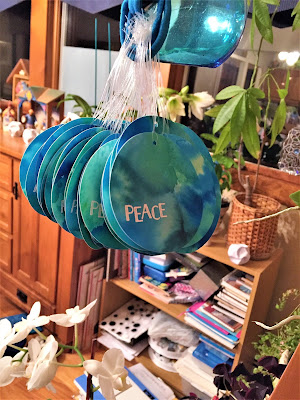 Oh, and in this picture you can see the bookshelf that I stuck in the dining room area that's chock filled with journals and crafting books - that's going to be replaced by a new closed cabinet to match the hutch on the left once we can get to the Amish place to order it.  Our Christmas present to ourselves.

Email ThisBlogThis!Share to TwitterShare to FacebookShare to Pinterest
Filed Under: 3D Projects, Recipes, Thank You Cards

We're sharing CHRISTMASTIME at the picnic this week.  In some ways I prepare for Christmas all year.  This would mainly be with the cards that I create using the prompts from the Jingle Belles.  This really helps me avoid that December crush getting them ready and I totally enjoy being able to have a variety of cards.  Sometimes, as in this year, I don't get as many done as I need and wind up mass-producing the balance with a simple, yet still pretty card.  The agreement I have with HWNSNBP is that I make the cards and he signs, stuffs, and mails them.  I have a stack of post-it notes with the names of the recipients on that I stick on the cards because I'm not totally comfortable with him picking out who gets what. 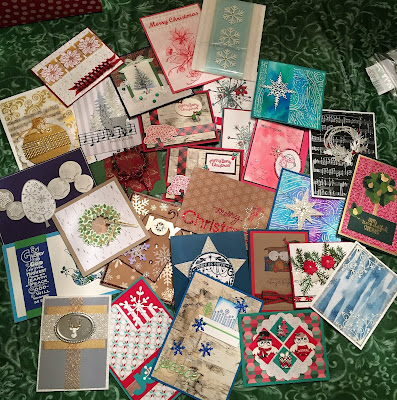 I've cut back on my baking drastically since the kids have grown up and moved out.  In place of the baking I make homemade marshmallows - plain white vanilla and pink cinnamon.  I was in a little bit of a panic early this month as I couldn't find the Red Hots that I use to flavor the cinnamon ones.  But I happened to mention this to my hairdresser and a few hours after my last haircut, she called me to say that she found them while shopping after work.  So I sent my elf, er HWNSNBP out to get them the very next morning and this last weekend the marshmallowing began. 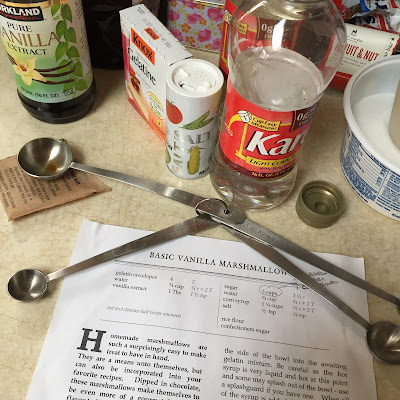 Aren't these the cutest clips helping to keep the parchment paper in place. 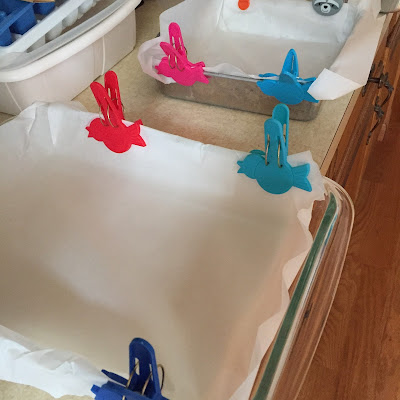 I highly recommend using a stand mixer when making these because the hot liquid has to be beaten until if forms pretty stiff peaks which usually takes more than 10 minutes and would probably overheat a handheld mixer. 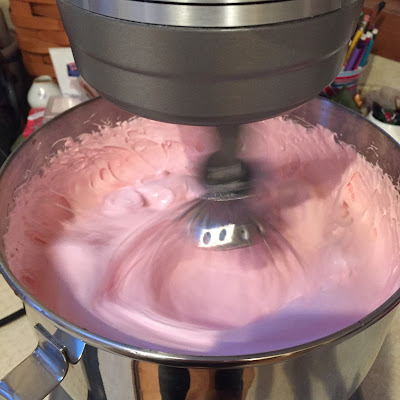 This step is the most time-consuming.....cutting and dusting all the edges with the rice flour/confectioner's sugar mixture. 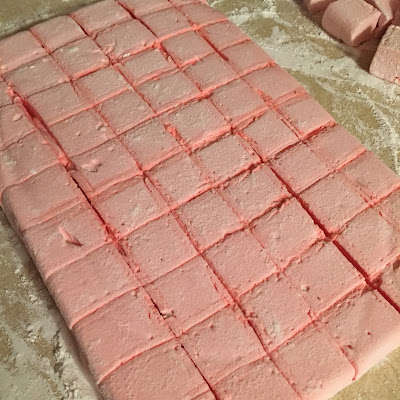 You can flavor the basic mix with your favorite hard candy flavor. 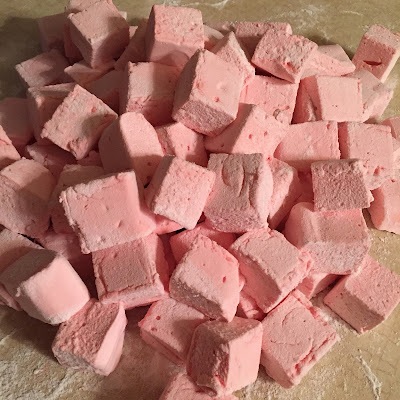 And I'm going right down to the last minute with this next project.... my Christmas Elf project that I do for my staff at school.  I was going to avoid this this year, however, I got this last minute idea that I thought I could whip up.  I used my Color Burst powders to decorate some sheets of watercolor paper, then used a die to cut out the circles. 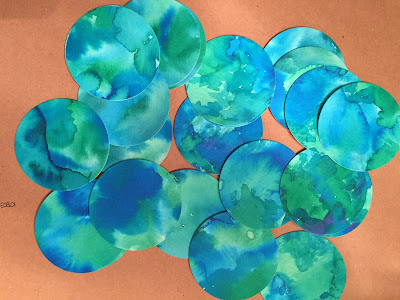 I stamped the word PEACE on each one with VersaMark ink and embossed in white EP.  I toyed with the idea of adding a dove to the sky, but I decided aganst it.  Tomorrow I'll puch holes in each one and add some gold cording to make them into an ornament. 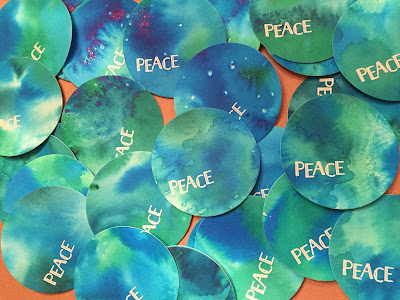 They're simple and inexpensive enough to do for the whole staff, and if I'd counted right, I would have had them done tonight, but I was one sheet short so I'll be "painting" again as soon as I get home from work tomorrow.  That means I'll have to be up early on Friday to sneak into the office before the teachers arrive, place them in the mailboxes and then come back home to properly get ready for work.  I think I'm being sneaky but most people know these little Christmas Elf gifts are from me.  I'll post the finished product tomorrow.

But right now I'll be headed over to Dotty Hill to see what the other Picnickers are working on this CHRISTMASTIME.  You can check it out here.

We have next week off, but we'll be back the first week in January.

Our Scribble Picnic theme for this week coincides with the beginning of Hanukkah and we could choose DREIDEL or SPINNING TOP or TEETOTUM.  I went with spinning top as most of my painting and drawing paraphernalia is temporarily stashed away.

Without going into much detail, my mother-in-law passed away at the age of 93 - her quality of life had been failing these last few years and she is at peace now.  So along with getting ready for the holidays, and having her memorial service with family gathering afterwards, I wasn't ready to pull everything out again yet so I went with what was readily available - some origami paper.

I folded the three separate units. 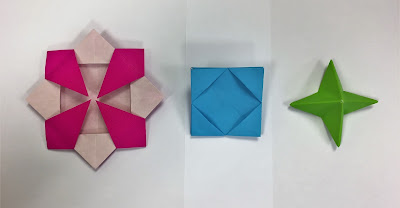 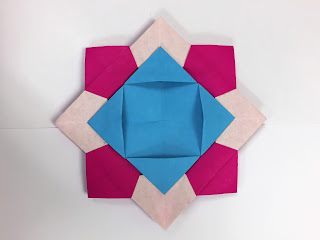 And then Unit 3 into that. 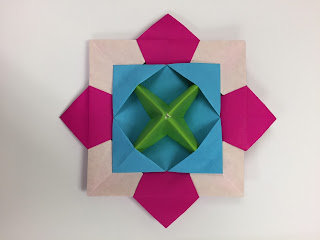 And (hopefully you can see) this is it spinning.

We had our first snow of the season this weekend, the same day that we had the service, and then on Sunday I received notification that one of the teachers in our school district passed away unexpectedly.  His wife also works in the the district so it has touched all of us and left a very foggy atmosphere.  This little spinning top did brighten things up a bit.

I'll be visiting with the Picnickers soon to see what they've brought this week.  You can too if you click here.  And should you wish to join in next week the theme is CHRISTMASTIME.
Posted by Lorraine at 11:29 PM 9 comments:

I have a penchant for things Scandinavian.  There's a mixture of nature and geometry that really appeals to me.  Not to mention the patterns and contrasts of color.

In thinking about what I was going to do for this theme I did some research into things Finnish and Scandinavian.  For instance, I love to go to IKEA.  I love their Christmas decorations that are often themed with gnomes and foxes, straw, and stars, white and red color combinations.  BUT, IKEA is based in the Netherlands which isn't part of Scandinavia.  So, I think my love of what I think is Scandinavian encompasses a lot more.

That said, I think I'm just in love with the folk art of that area of the world.  During my "research" I found a display of little white houses and folk art trees that I was coveting.  There was one tree that captured it all for me.  It was in white but I did mine in black.  This was an exercise in drawing a mirror image trying to get both sides to look symmetrical. 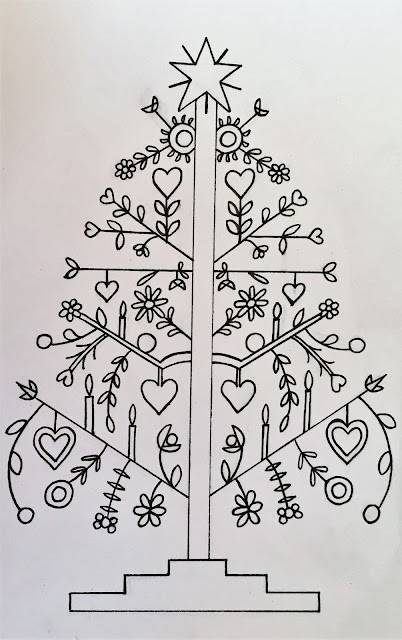 And this is a very quickly sketched and cut out (with the wrong scissors) snowflake that I was fooling around with this past weekend.  Against the red paper I thought it fit in with the theme.  I might give this another try in the near future with my detail scissors. It's off to the picnic now to see what other FINNISH/SCANDINAVIAN goodies everyone else brought this week.  You can take a look too by clicking here.  And again, should you wish to join in next week the theme is DREIDEL/SPINNING TOP/TEETOTUM,

Jingle Belles - Baby It's Gold (or Silver) Outside

Anyone else do any "Black Friday"/"Small Business Saturday" shopping?  There were some pretty good deals on art supplies if you were an early shopper.  Luckily Rachel was up and out early enough on Friday morning to do an errand for me and grab a set of 72 Prismacolor Pencils with a complimentary set of 12 watercolor pencils for.........$20.00 at ACMoore.  That's a savings of over $100.

I was out-and-about shopping with a friend on Saturday doing some "Small Business" shopping and we decided to stop in at ACMoore to check if they had any more of those sets that were on sale (it was advertised as a 2-day sale or while supplies lasted).  Needless to say, there were no pencils left. But I did have a coupon for 50% off any item not on sale.  It seems almost sad to say that the only thing in my basket not on sale was a piece of scrapbook paper.  This black paper with silver embossed music on it.  I thought it would make an elegant addition to a Christmas card and since this week's Jingle Belles challenge was to use metallics I was able to use it right away. 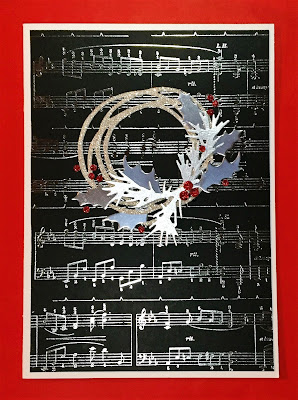 I took the picture against a red sheet of origami paper and now I'm regretting not having put this on a red card base.  Maybe I'll cut the front off and just do that! 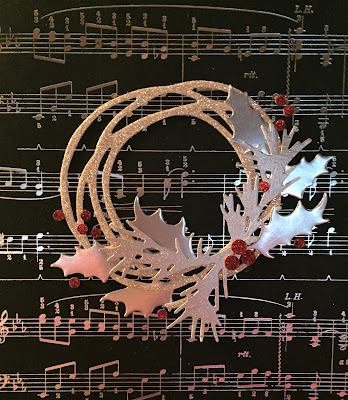 You know how tricky it is to get pictures of shiny paper so you'll have to take my word for it that this is much prettier IRL.

Okay, not sure I'll be getting another card done for this challenge, so in case I don't I want to thank Lauren and Steph for another wonderful year of Jingle Belles challenges.  I am so much better off doing these all year long and not waiting until December and I have them to thank for it!!! Merry Christmas ladies!