In Between - Photo Challenge 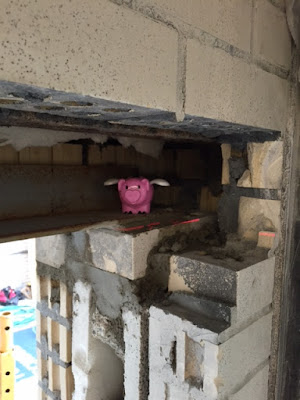 So here's the scoop..... I know that the last two days' prompts were hot and cold leading to today's in-between might have led you down the path to another temperature reference photo.  And I was probably going to go there myself until this opportunity arose.

We're having some construction done in our office at school this summer.  They've broken through a wall to the outside and are going to install a new security set of doors.  So as they were doing some brick work this morning (oh yes, we worked in the same room while they worked) I asked the mason if we could put something in that space before they bricked it up and he said "of course".

Knowing that I have a little stash of these solar flying pigs at home, I decided that this one should be "time-capsuled away" in-between the bricks for posterity.

And a little confession - it was my phone that took the picture, but I was not the photographer.  The mason was on a small scaffold structure to get up that high and I was not going to climb and since he offered to take the picture I was grateful that he did.

Email ThisBlogThis!Share to TwitterShare to FacebookShare to Pinterest
Filed Under: Photo Challenge July 2015