I should be finishing this today but our Merry Fishmas party put me a little behind. Who am I kidding - it put me very behind on a number of things, but guess what?  It's almost August and there's still lot's of summer left to get these things caught up. Lessons have been learned though.  Like the need to limit participation in too many things.  Ah, but they are fun, so let me get on with getting on........

Day 50 - Kimono
In my mind, kimonos are made out of silk.  Well, maybe just the fanciest ones are made out of silk. So I decided to create my own patterned "silk" with my Twinkling H2O's.  Each of the bird and leaf motifs has faux stitching on them in an attempt to mimic embroidery.  This is a fail - it's shiny like silk, but it's a mess.  I don't mind using the Twinkling H2O's to paint with, but the index card paper was not very easy to work with and this is just a mess.  However, I spent way too much time on it to just discard it and I did learn something from it, so all is not lost. 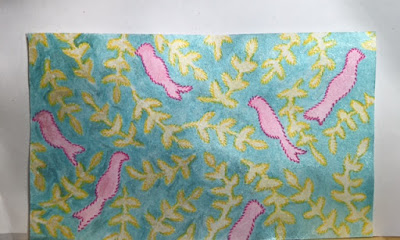 You can see the sheen a little better in this photo. 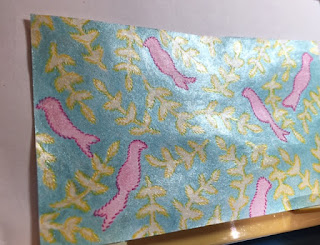 Day 51 - Symmetry
What is used most to represent symmetry when teaching this concept - a butterfly.  Done in Zig Clean Color markers. 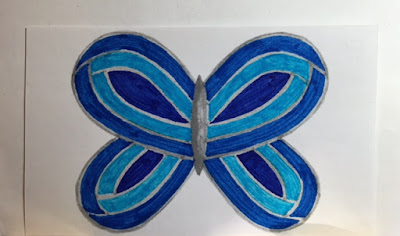 Day 52 - Garden
This would be a wannabe garden border done in my Zig Clean Color markers with water.  Lupines.  I did have lupines in our border at one time, but they proved to be candy for the deer as so many of the other perennials we planted did that we gave up on them.  Still, I love the colors and if you get a chance, you should check out the children's book Miss Rumphius by Barbara Cooney, not only for the story but the beautiful illustrations. 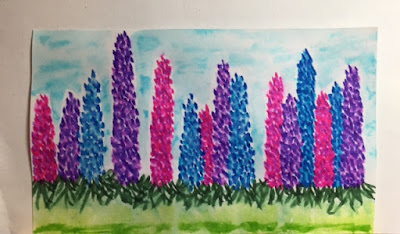 Check out the video below for the story.

Day 53 - Raindrop
Funny how raindrops and teardrops are often depicted with the same shape.  Is that why rainy days make us feel so sad?  This was an experimentation in resist.  I used several different colors of Prismacolor pencils - which are wax based colored pencils - and washed over them with Kuretake watercolors to see how well they would resist the watercolor and you can see all of them though some are easier to see than others. 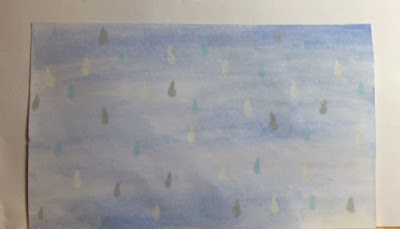 Day 54 - Envelope
I created a tangle resembling and envelope and then just for kicks added a little folded paper envelope with a would be love letter inside. 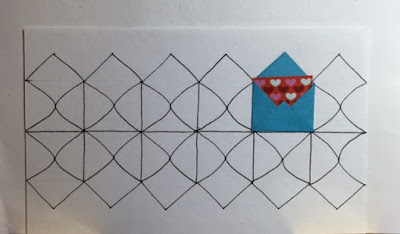 Day 55 - France
I must admit that I was at a loss with this one.  I had several different ideas running through my head, but it wasn't until during a phone conversation with my daughter while I was trying to draw croissants with no success that I mentioned to her the difficulty I was having coming up with something representative of France and she started firing off things, one of which was Fleur de lis.  Oh, oh, I have a tiny little fleur de lis punch I can use, I thought.  And then I saw the roll of black and white diamond washi tape on my art cart and thought of Harlequins.  So this then came quickly together punching the fleur de lis' out of lavender (again thinking fields of French lavender) washi tape. 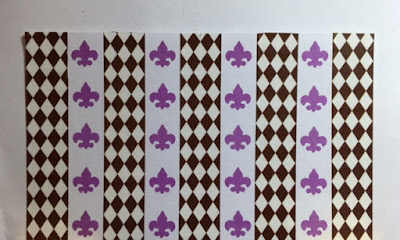 Day 56 - Machine
You're probably looking at this and thinking you don't see a machine.  Ah, but there are many simple machines in this - inclined planes. I used my Derwent Inktense pecils, an aquapainter, and a silver fine-tipped marker to delineate the wedges all of which are different colors although some may look very similar. 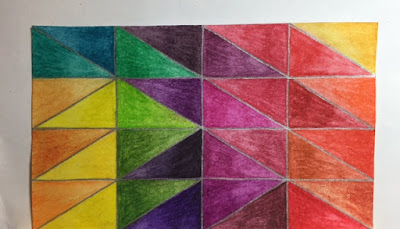 So with Week 8 done, there are only 5 more days of cards to do and I hope to have them done this weekend to wrap up this year's ICAD experience.

Email ThisBlogThis!Share to TwitterShare to FacebookShare to Pinterest
Filed Under: ICAD 2015