Today is a holiday here - President's Day - for those that work in education for the most part.  It's one of those optional days, but HWNSNBP has it off so we're fitting in as many "fun" errands as we can today.
I hope to be back later today with some challenges but I had to share this first thing.  What a sight to see at 8:25 this morning.......... 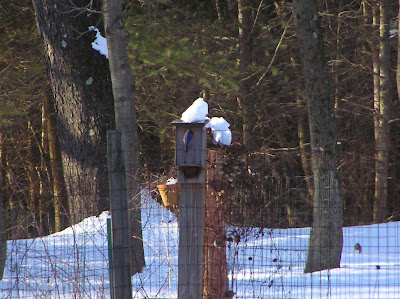 Isn't he beautiful!  (click on the picture to see it closer)  It's taken from the house and about 100' away and I zoomed in as much as possible without having it become too grainy.  There was actually another one in the box and had I not been so upset that he flew away I would have been able to snap a pic of the second one leaving the box.  Don't know if it the one inside was male or female, but I have to say that I've never seen bluebirds and snow at the same time.  What a treat.
Okay, now on to IKEA!
Posted by Lorraine at 9:04 AM