Let me quickly tell about this card and then I'll get to the Meatloaf.

I'm (we're) still putting Christmas away and finding things stashed in some pretty strange places. I came across this beautiful green and white tissue paper that my friend Sabrina had used and the silver and green cardboard pieces were from boxes that held gifts. Actually, I think the green came from a box of candy or crackers or something like that.  And the green bow came from the package of Butterscotch Caramels I mentioned in my previous post. 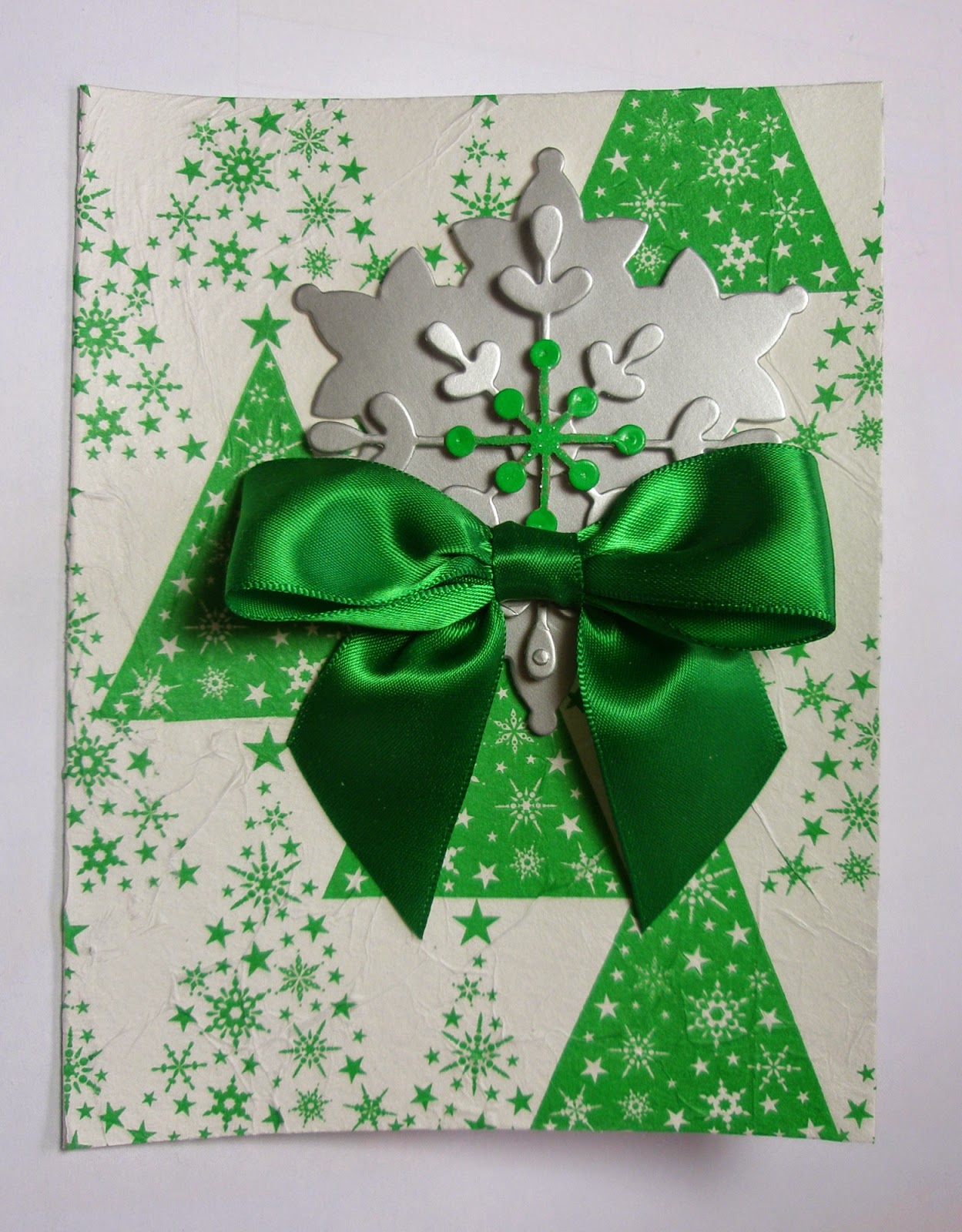 All that lovely green somehow came together in a pile of paper and ribbons that I was sorting through and I knew they had to be made into a card.  I used some snowflake dies to cut out the silver and green cardboard and wound up having to add some Crystal Effects and glitter over the center of the green one because the layered cardboard wasn't really meant for such a delicate cut out (lesson learned), but the cracks are camouflaged well.  The card backing (watercolor paper) is a little warped from gluing the tissue paper onto it, but I can play with that a little and get it straighter I'm sure.  I'm glad I saved all these cast-offs.  I've got about a bazillion other things saved and maybe someday they'll be like the toys on the Island of Misfit Toys and get used too. 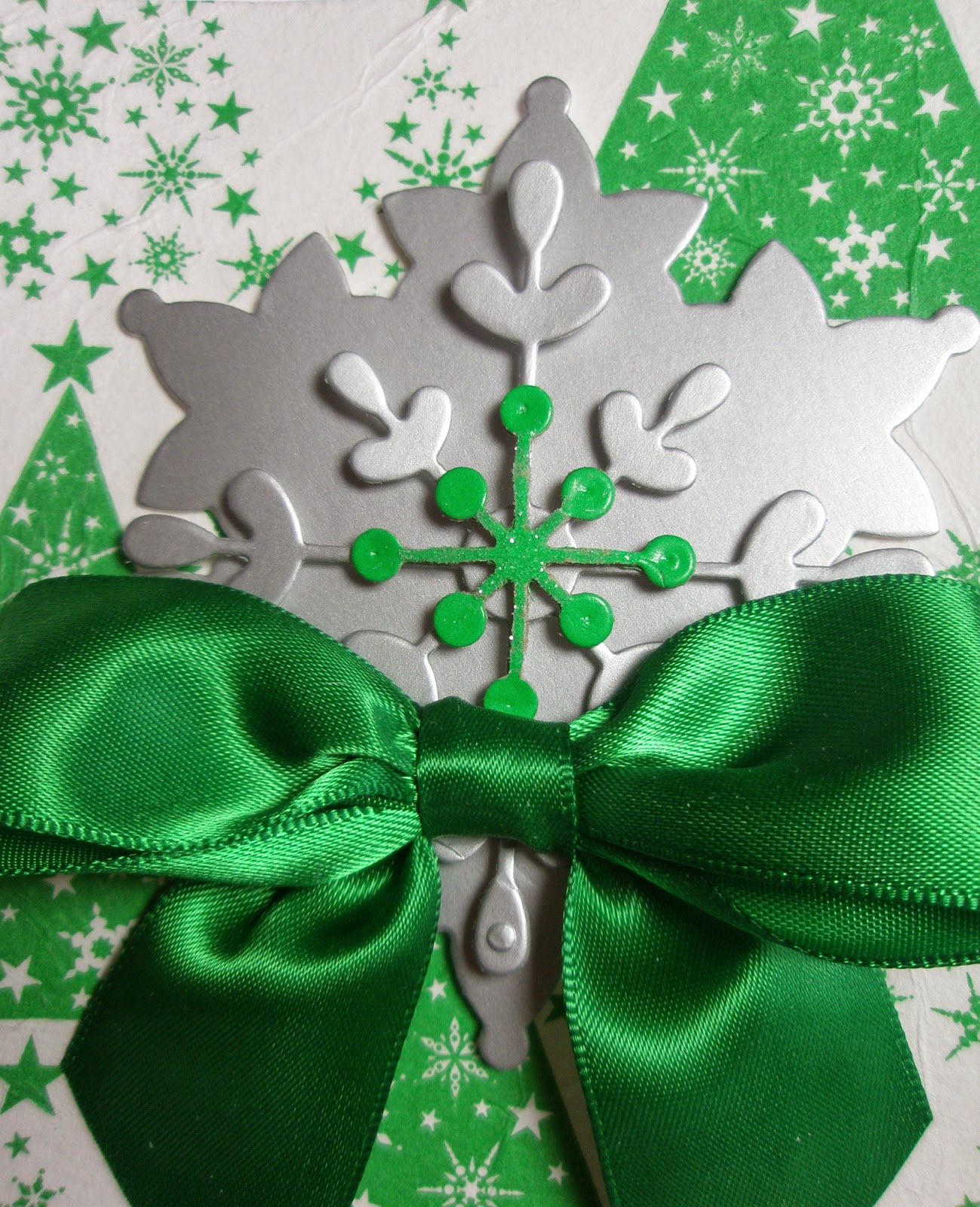 So now, about the Meatloaf Cook-Off.

If you've been here before you may remember me referring to our group of friends we call Table 7. We have been friends forever.  Some of us since before high school.  To still be close with a group of friends from that part of your life I'm told is a little out of the ordinary.  There are 9 of us and the name Table 7 came from where we were assigned to sit at the first wedding of the oldest child from the group.  Subsequently, at each wedding from there on, we asked to be placed at Table 7, no matter where in the room they wanted to stick us.

There are several annual events where we get together and this one had it's inception when we were together on Memorial Day weekend.  Someone had a hankering for meatloaf and was perseverating over it and the conversation turned into who made the best meatloaf.  There were two individuals who wanted to prove their recipe was the best and so the date for the cook-off was set for New Year's Eve at another of our annual gatherings.  It would be Team Linda vs. Team Bill.

We had all that time in between Memorial Day and New Year's to come up with rules and things but it came down to the week between Christmas and New Year's when things came together.  One person suggested that there should be an award and so HWNSNBP and I set out to fulfill that request. I quickly drew up a sketch using mostly materials I thought we might have on hand. 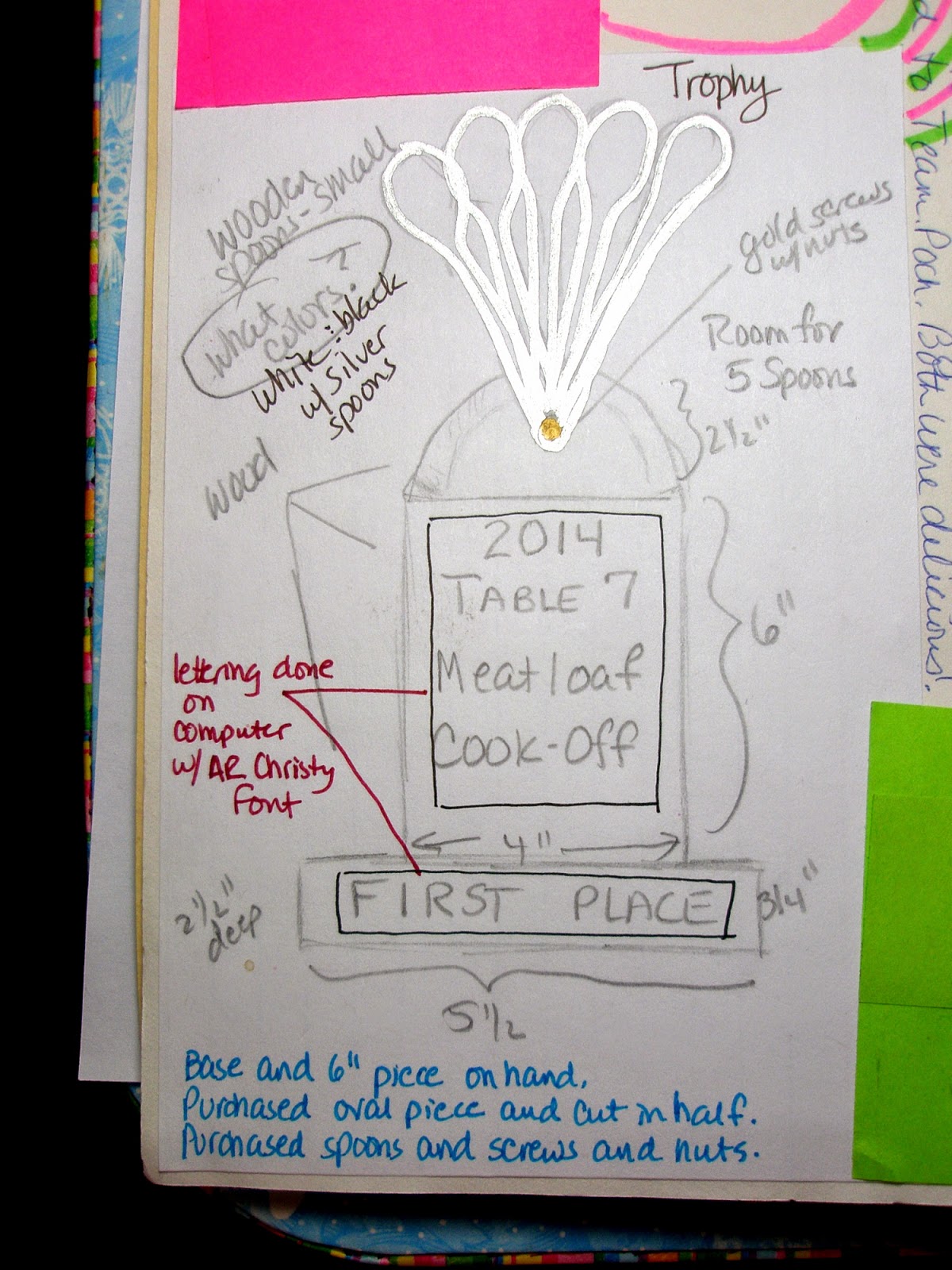 There are some notes on that card now about the finished product.  But most of it we did have on hand.  I had just purchased some wooden ice cream spoons from an on-line source and I painted them metallic silver.  HWNSNBP cut the wooden pieces - oh, we did make a trip to HD for the piece of wood on the top, an oval cut in half, and the screws and nuts.  He glued all the body pieces together and gave it 2 coats of white paint.  I printed up the lettering on white cardstock and backed that with black cardstock and then glued it on.

I printed up a flyer the night before the event with the chef's pictures on it and some rules outlining the procedure for the cook-off and mailed it to the group.  It was officially unofficial and a little tongue-in-cheek.

Anyone besides the spouses of the chefs was a judge and we learned last minute that we would have 2 additional judges so I quickly made some adjustments before we left that morning.  (We were meeting at our friend's house on Long Beach Island for the party, near our condo in Barnegat.)

Each chef got to choose an envelope that contained 7 toothpicks with either pink or green flags on them.  The judges did not know who got which color.

Each judge received an envelope with a score sheet (which we wound up not using) and 2 silver spoons with pink and green flags on them.

Once they were finished cooking, the chefs cut 7 bite-sized pieces of their meatloaf and added their flags and then they put them together on one tray and brought them to the judges.

The judges tasted each (encouraged to cleanse their palates with something non-alcoholic in between bites - it was New Year's Eve after all!) and then they were to put the spoon with the colored flag that matched their choice into a bag. 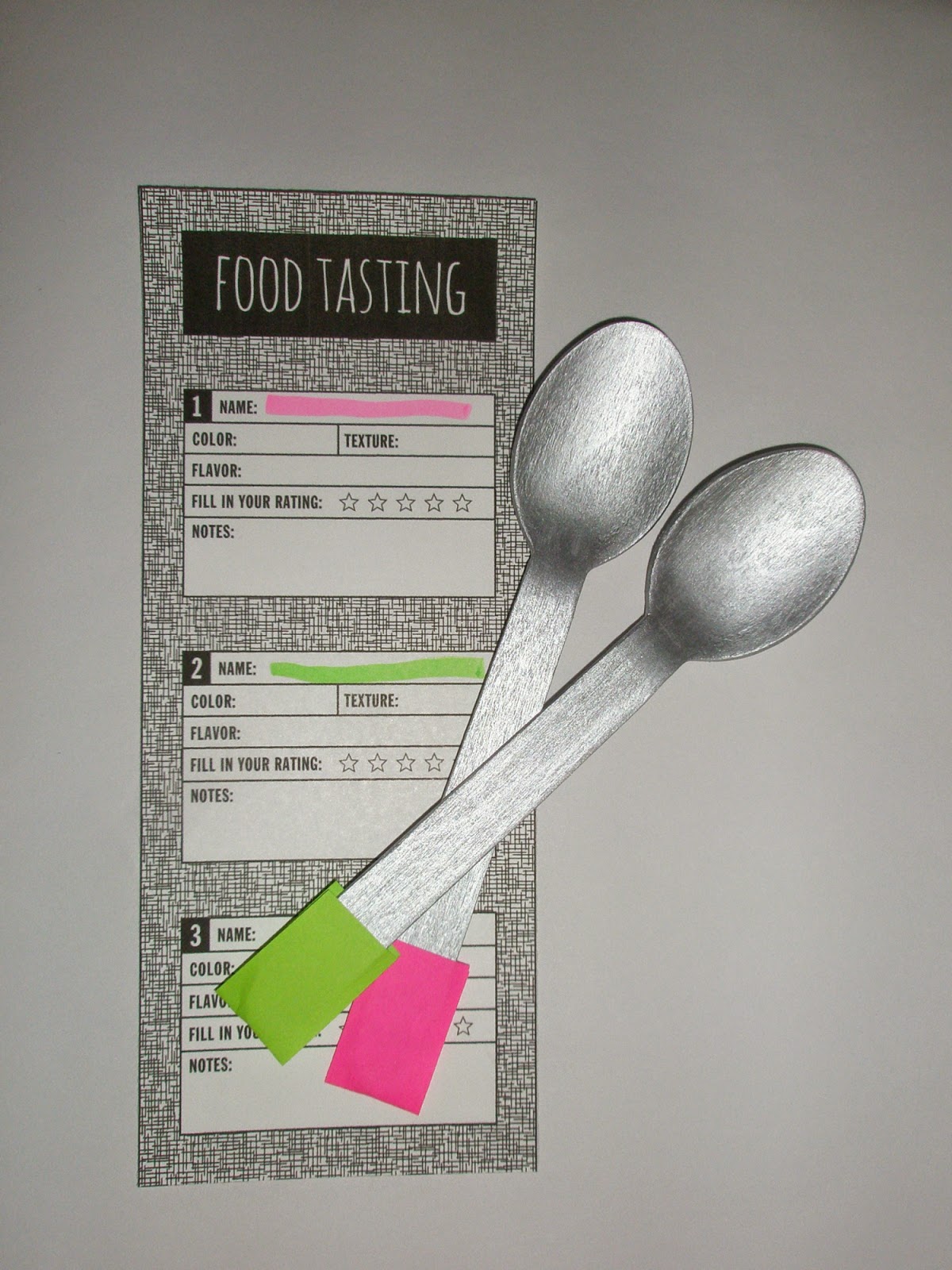 Then HWNSNBP and I took the bag into the next room, counted the spoons by color and attached them with the screw and nut to the top of the trophies (we put the washi tape flags on the back of each trophy so their wouldn't be any question about our counting). 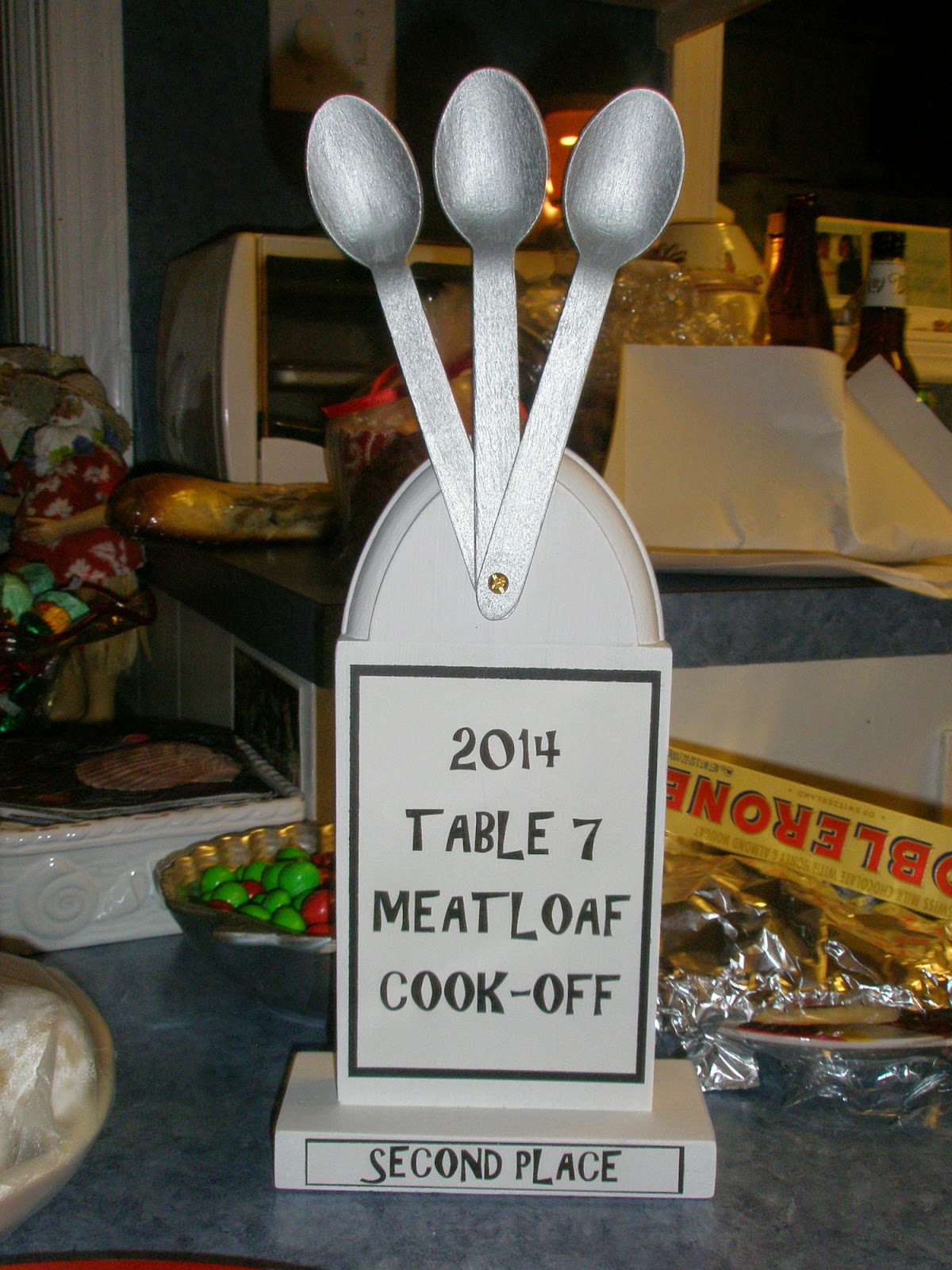 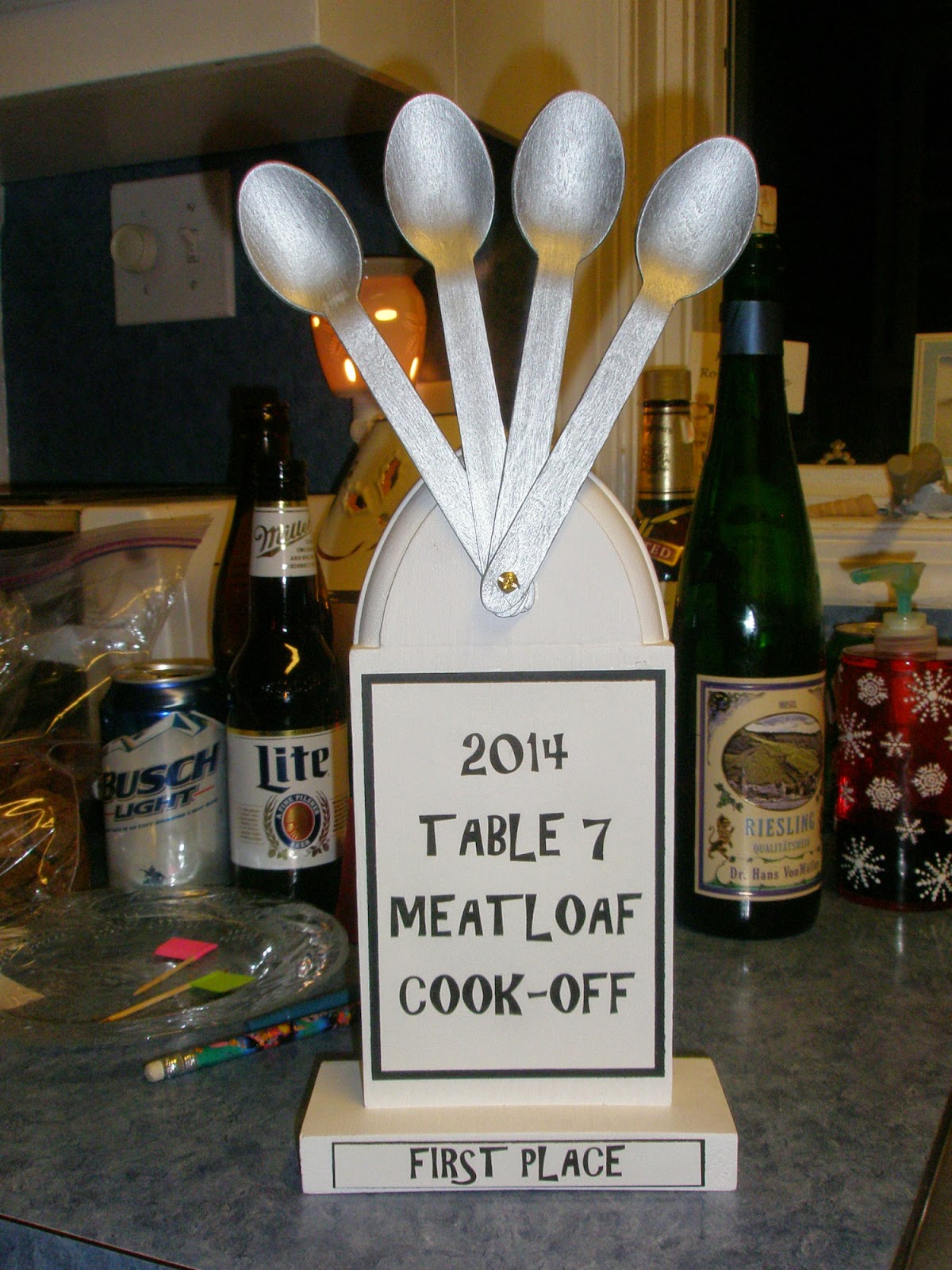 As you can see, it was a close contest but Team Linda came out on top with 4 spoons.

Here is a picture of the chef's and their spouses. 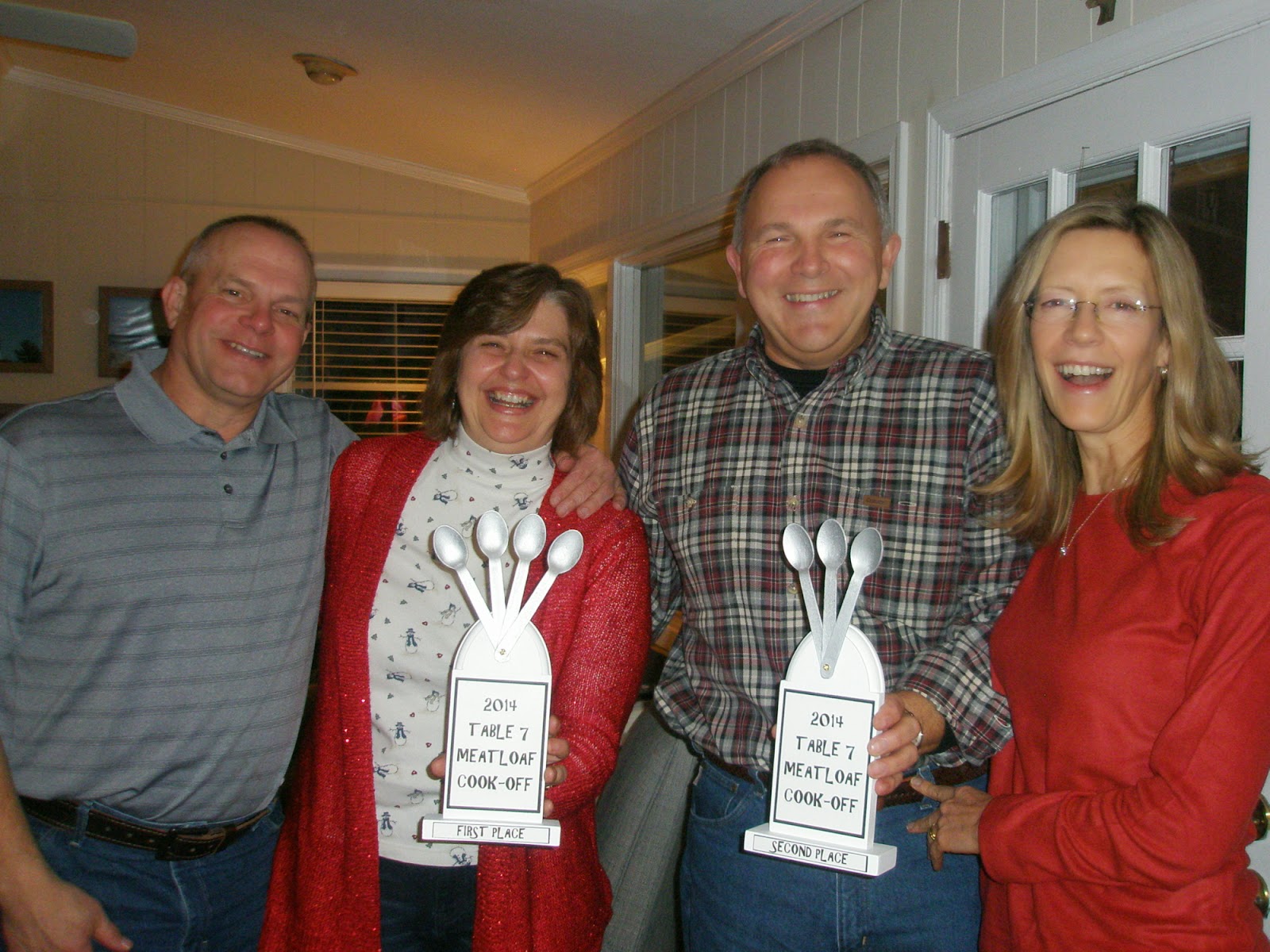 And then we had a ton of meatloaf to enjoy for dinner!