Jingles Belles - Have Yourself a Merry *Little* Christmas - A Dedication

A few days after the new year began I read some distressing news on Facebook.  A stamping friend that I had made through the internet had lost her battle with brain and liver cancer and passed away. Her name was Charlene aka Bertie at our Tea Party Challenges.    When I was doing those challenges it was fun to read the banter between Charlene and Cindy or Bertie and Gertie as they referred to themselves.

There was one tea party in particular that became very crazy and somehow there was a snowball fight going on - virtually, of course - and I surprised Charlene by sending her a package of Hostess Snowball cakes.  She loved them and it became a running joke with us.  We exchanged cards at times and messages on each other's blogs.  When Charlene retired three years ago we all did cards for her combined retirement/birthday party using one of her favorites - m&m's.  Here's the card that I made for her highlighting the new at the time coconut m&m's.

Charlene took part in lot's of challenges and also belonged to a group of stampers called the CCEE Stampers.  Yesterday they posted a tribute to Miss Charlene and asked us to make a card in her honor as it would have been her birthday.  They suggested visiting her gallery and casing a card or making one using some of her favorites which include penguins and the color purple.  And that's where I got my inspiration for this week's Jingle Belles challenge.  Focusing on the "twinchie" of the penguin and the *little* stars, this is my tribute to Charlene. 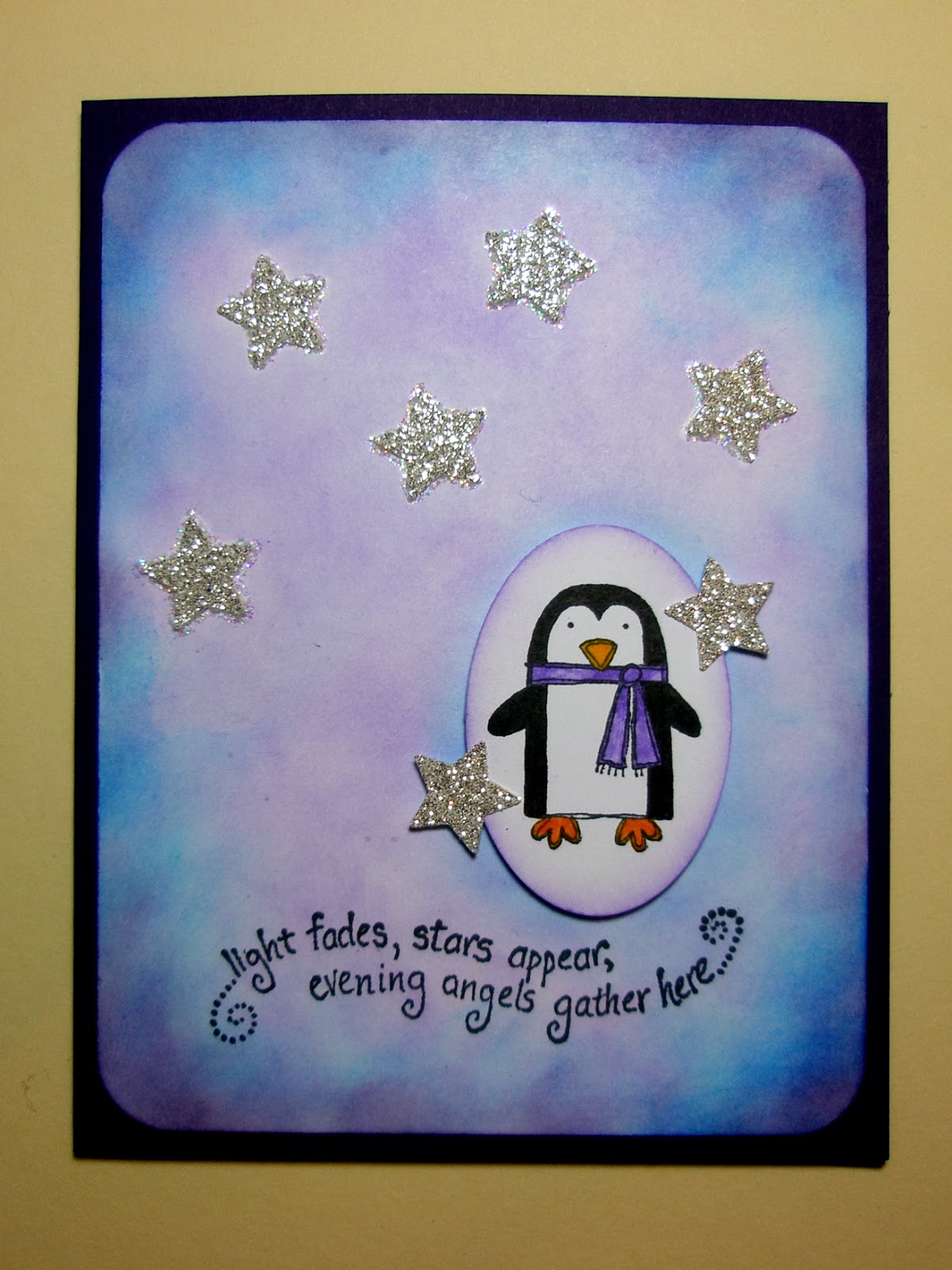 I'll remember her humor and kindness, her talent and her willingness to share it.  She will be missed. 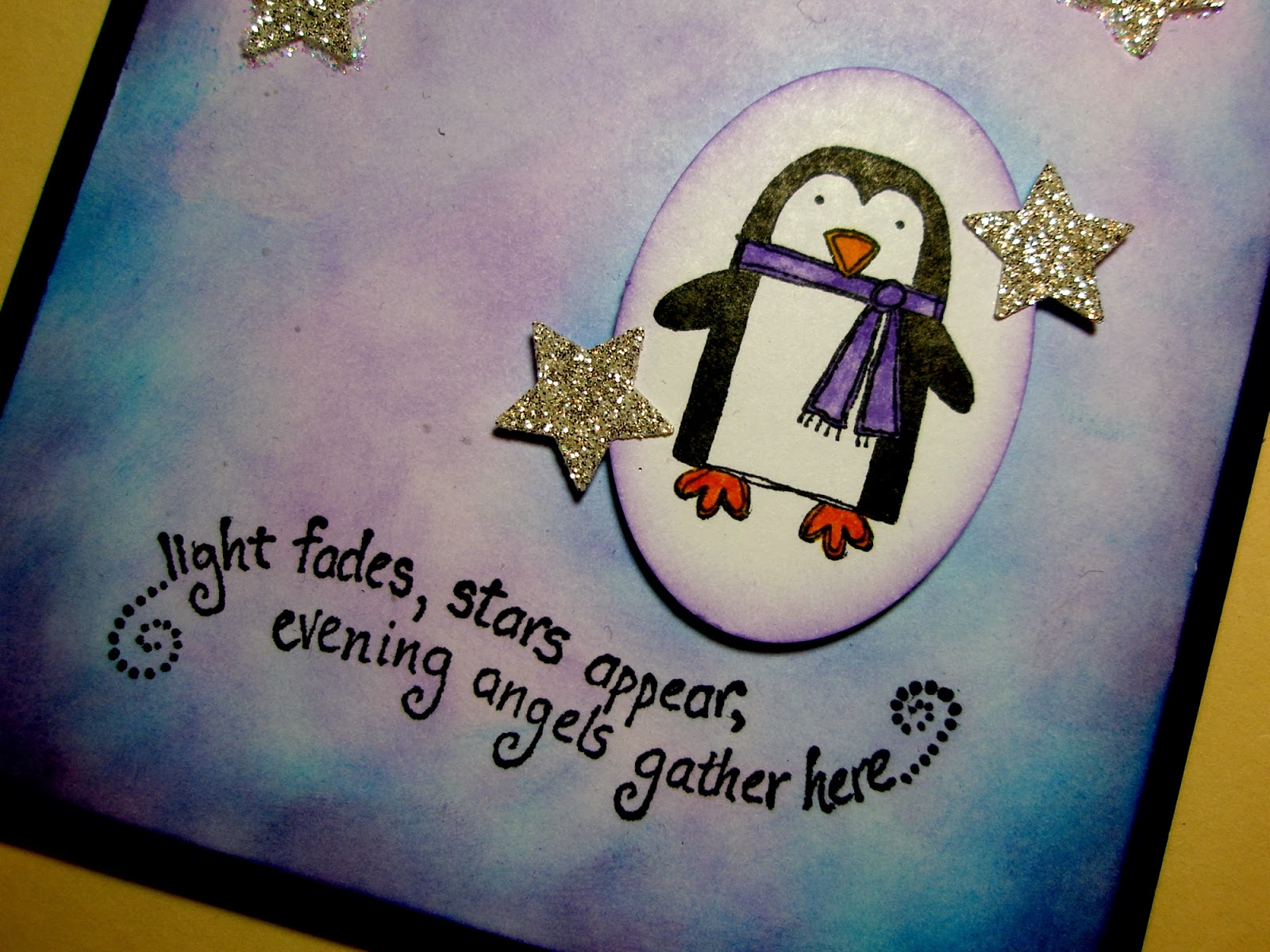 I am sad to lose a friend like Charlene.  People find it hard to believe that you can make such good friends of people you have never met face to face.   But if you think about it, we are drawn to those who share the same interests.  How how many of us had pen pals "back in the day"?  If you did, chances are you never met them in person but may have only known what they look like by a picture they might have enclosed in one of those eagerly anticipated letters.  There was an excitement to it. These days you are cautioned to be careful of what you put out there for others to read because it goes to a bigger audience and some of that audience is not so discerning as to be looking for common interests.  But for the most part, there is a great deal of sharing going on.  You really can get to know a lot about a person through their posts and you come to care about them.  When I don't see someone posting for a length of time, I do become concerned.  There are a few of the bloggers that I have followed who have stopped posting and not all of them have explained why, so I do wonder about those. This is a hobby and not a job for most people and you do have to find the time to edit photos, write posts, visit other blogs and it all takes time.  So I do understand that daily life can put a hiccup into regular posting.  But I do wonder.

I had a totally different card planned for this challenge so I will be back with a second one before the deadline next week.  I hope you enjoyed this one and I hope you'll say a little prayer for Charlene and her family.
Posted by Lorraine at 10:39 PM