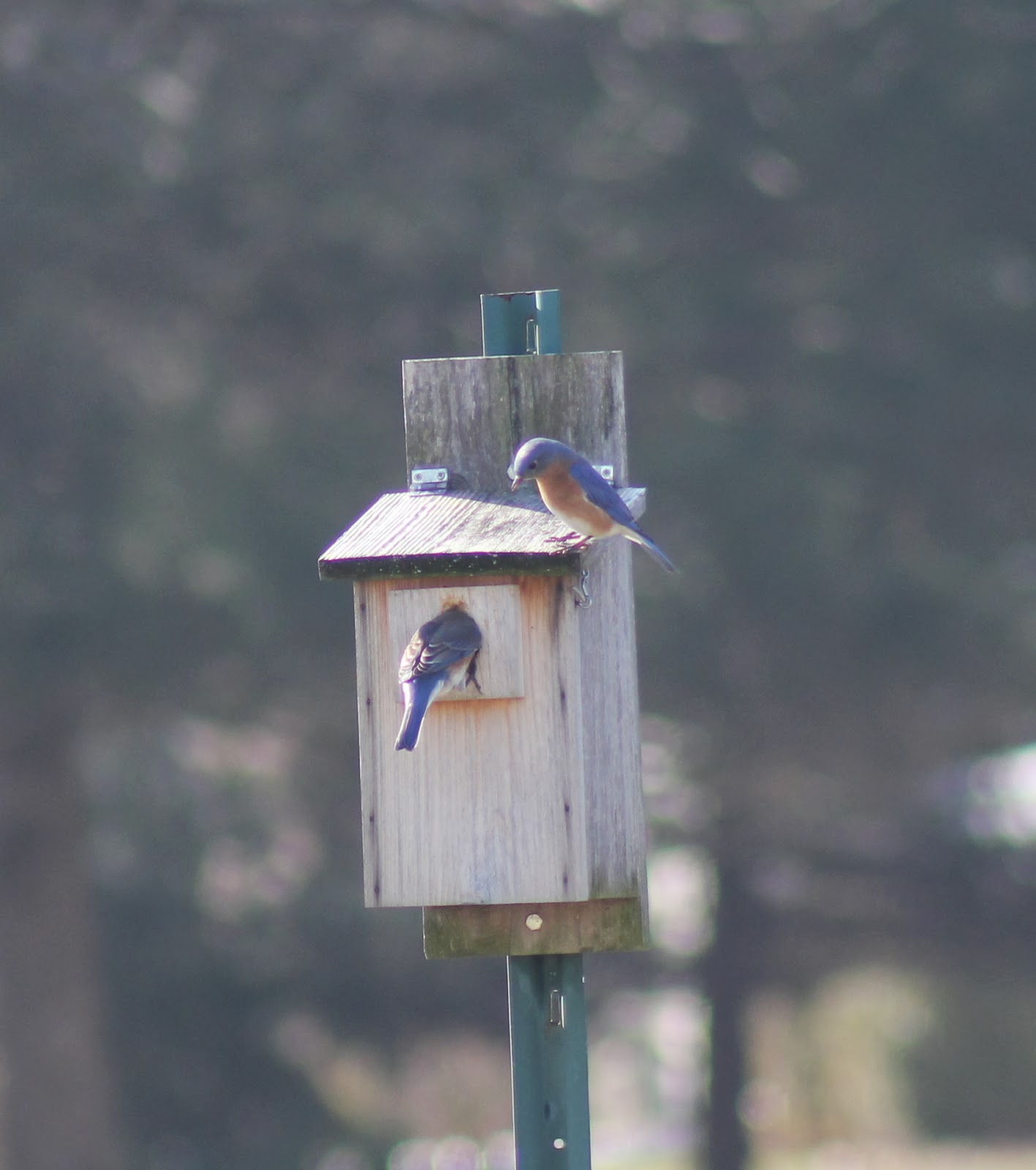 Bluebirds that is.  We haven't had very many sunny days recently where the temperatures on those days weren't extreme (Polar Vortex induced temperatures) or there was snow cover, but on the milder sunny days I had noticed the blues checking out their box so I made sure to have my camera with me yesterday just in case and I was rewarded with a sighting. 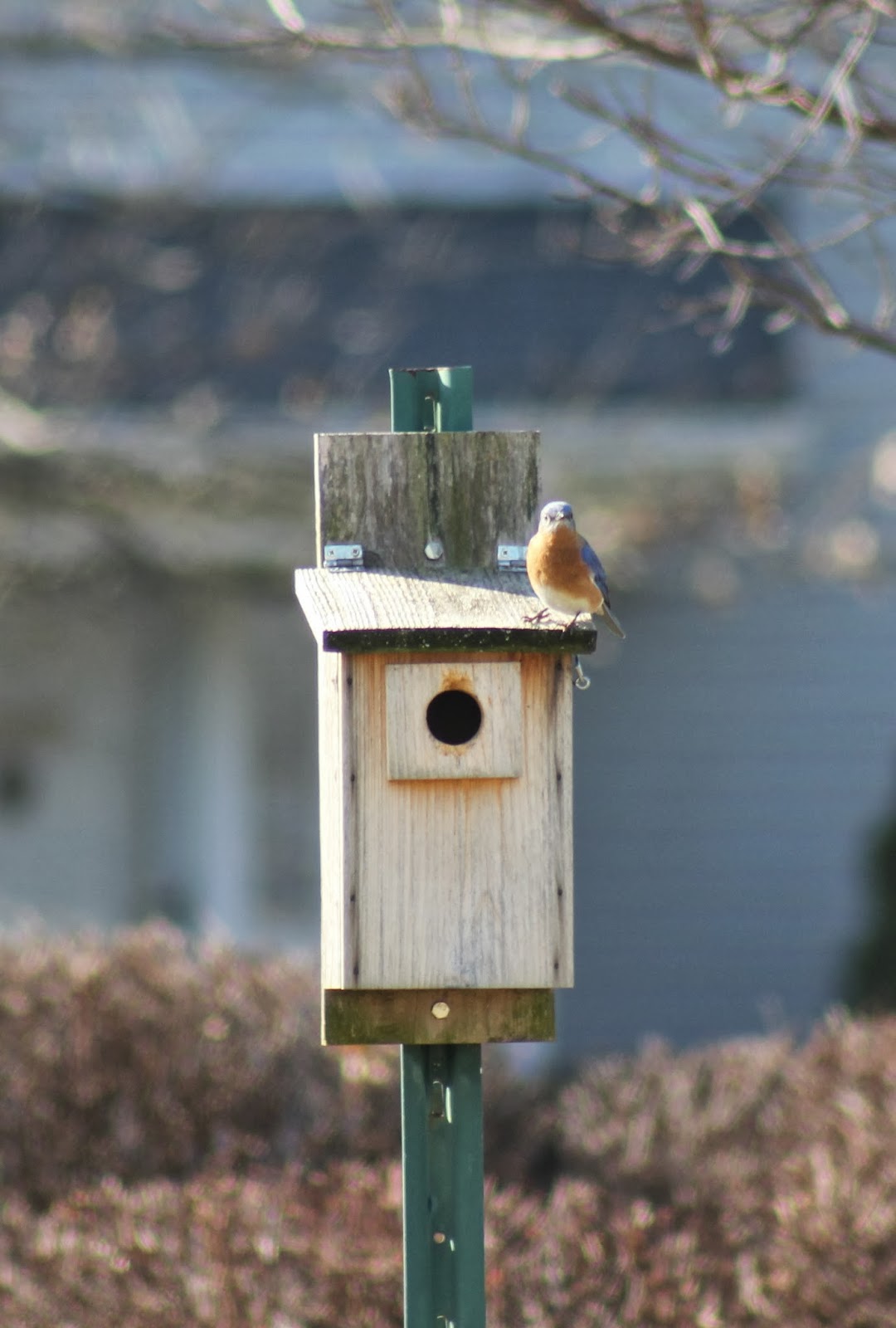 I have to leave the office and go into the lobby to get a window that does not have a screen in it and I sometimes try to open the outside door very carefully so as not to frighten them off.  The box is about 60-75 feet from the front door and I use my zoom lens to the max. 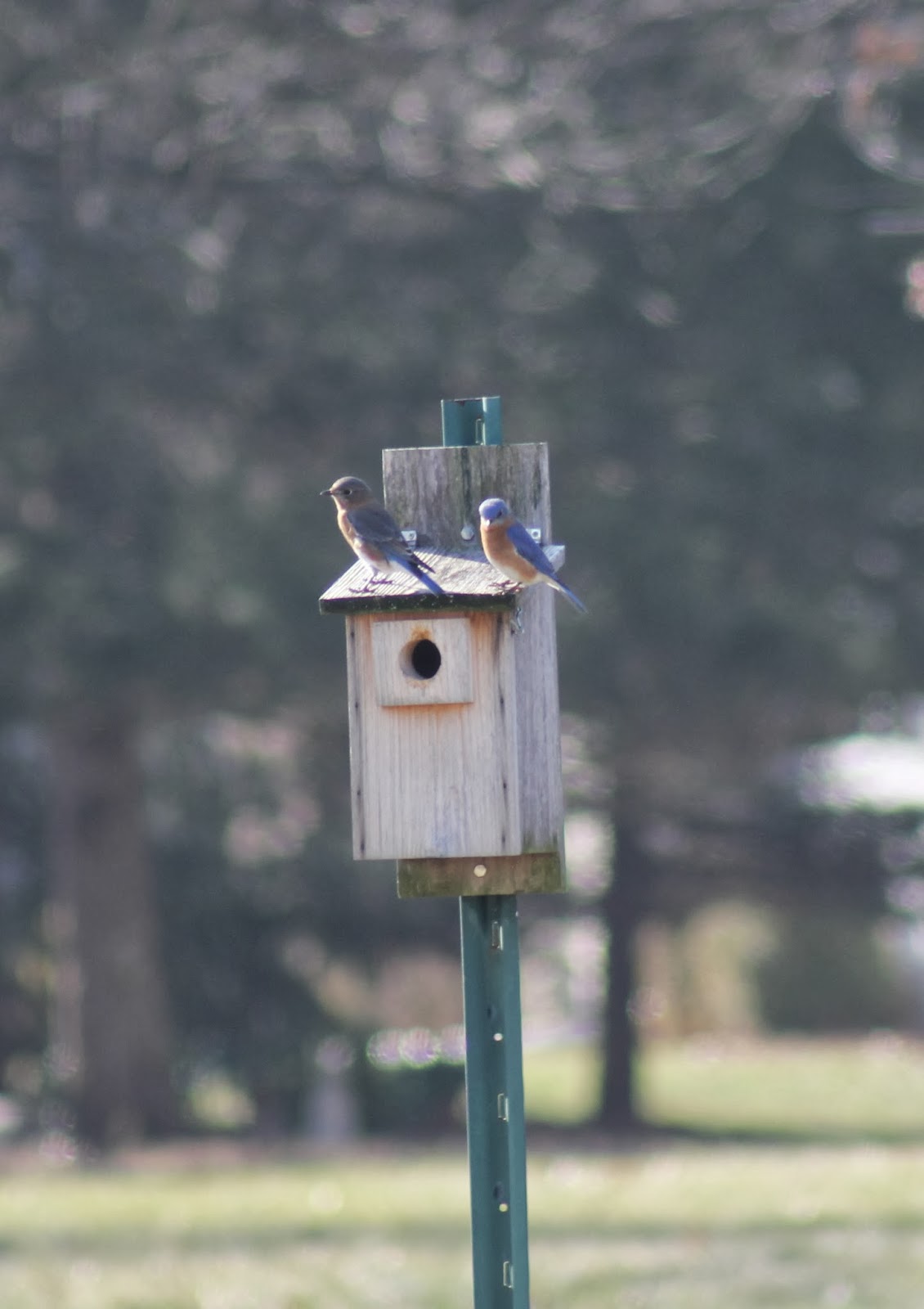 Yesterday our new custodian saw me in the lobby with my camera and coaxed me to go outside and take these pictures.  He kept telling me to go closer and closer and I told him he was responsible for making sure I didn't trip or fall off the sidewalk into the driveway as I kept clicking away. 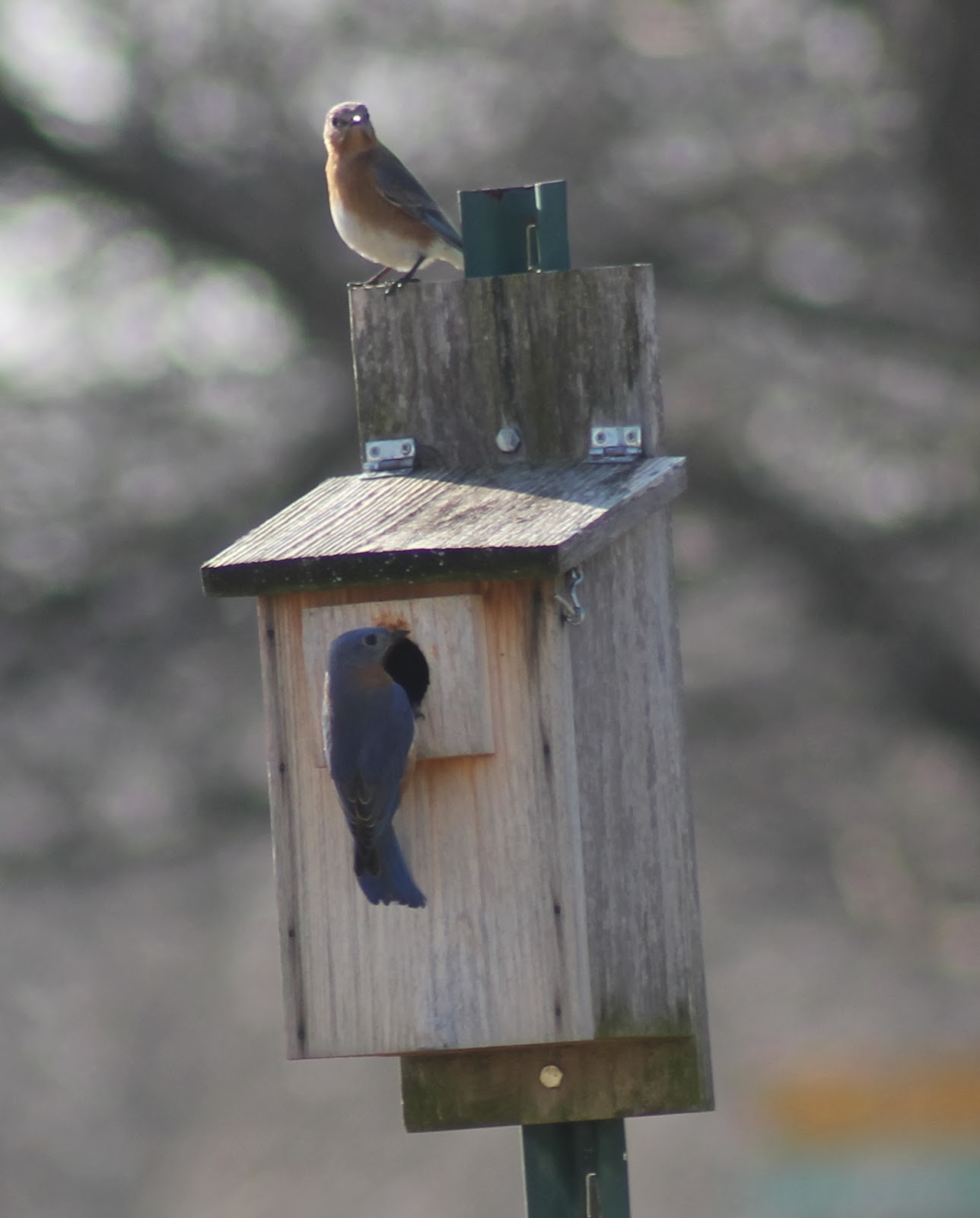 They were suspicious as you can see, but they let me get about half the distance to the box before they flew off.  These pictures are enlarged even more on the computer.  Our custodian told me he has a larger lens that he's going to bring in for me to try out.  I might have to start putting some of my craft money aside if I like it.  Wait, let me rethink that.  I'll find some way to make it work without sacrificing my crafting addiction!

Temperature yesterday was about 40º, clear and sunny and not only just perfect for the birds but just perfect to have our new kitchen island delivered. 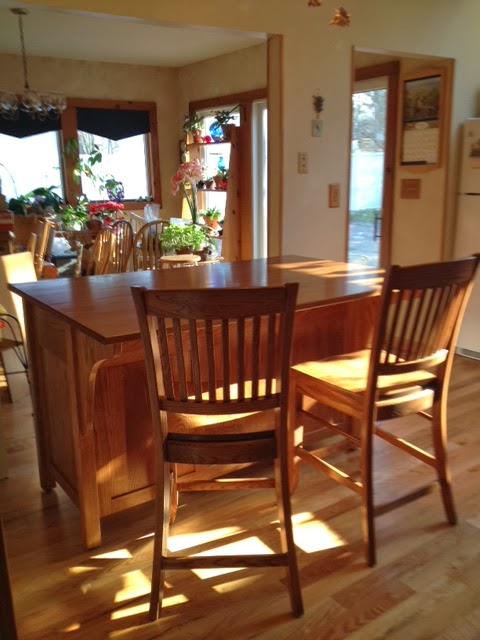 When we put the new floor in in June, we broke through the half wall between the kitchen and dining room area and I felt that having the two tables so close in proximity was a little redundant.  I also wanted a little more storage and our floor plan just didn't allow for additional cabinets.  So I thought an island might be ideal.  I have to admit that we looked and then kind of gave up for a while. We even had someone come out to the house to talk about making a custom one for us.  He asked more questions about what we wanted than we really had hard answers for so we continued to wait it out.

Then, one day in October when we were on our way to the condo on a Saturday morning for a change, HWNSNBP suggested that we stop in Columbus at the Amish furniture place which is usually closed by the time we pass it on Friday nights.  The first thing we saw when we walked in the door was exactly what we wanted.  Well, almost exactly.  The one on the floor had a top that only extended 8".  I wanted one that extended deeper so you could fit your legs completely under it without having your feet hit the island.  That was not a problem for them.

What was a bit of a problem was that the chairs that we picked out were made by another shop and even though both shops used the same wood, they used a different brand of stain, so we had to purchase the stain for everything to match.  Well, as luck would have it, they forgot to use our stain so that meant we did not have the island in time for the holidays while they made another one. 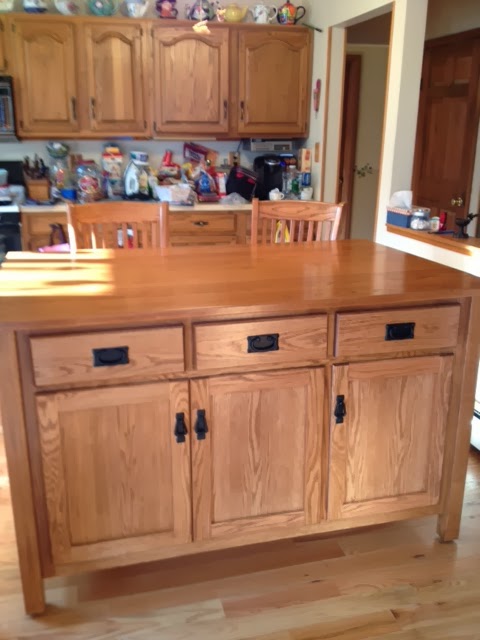 But it came out beautifully and they were able to just squeeze it through the doorway without any damage and it fits perfectly.  (Pay no attention to that counter under the cabinets - most of those items were being relocated and I should have finished that before I took the picture.)

So as nice as yesterday was, this morning was a icy, snowy mess.  We had new living room furniture delivered in the middle of the worst part of it and I almost broke my hand "helping" get the couch through the door.  Thankfully it's just bruised and sore and there was no damage to the couch.  They had it wrapped up so tight with moving pads and plastic and the plastic got caught on the locking device of the sliding screen door.  I had to help compress the cushions as the movers pushed (HWNSNBP had to work this morning doing a high school basketball game) and once we got it going my hand got sucked between the couch, the plastic and the doorway.  Ouch!

But it's all in and looks wonderful and I would take a picture but all the old furniture is still here and the room is rather cluttered at the moment.  I had a nice nap on my new couch this afternoon but I think Kirby is in a little bit of shock with all this change and these strange people that have been in the house these last couple of days.  He's been a little quiet and hasn't ventured out of his cage much but he'll get used to it as will we.
Posted by Lorraine at 10:48 PM

Email ThisBlogThis!Share to TwitterShare to FacebookShare to Pinterest
Filed Under: Bluebirds, Ramblings