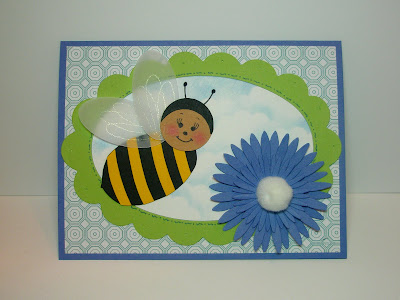 I don't know what possessed me, I'm exhausted, but I can't get to sleep. So instead, I did this.

There's no stamping on this card. Just a lot of punches and dies. And one huge bee. But doesn't she have a friendly face?

The bee is made from oval and round punches. I punched a yellow oval the same size as the black and then cut the stripes from that. After they were glued on I trimmed it to the body shape leaving the slightest hint of a stinger. It was much easier that way.

The head is a 1" round punch of Creamy Caramel and a slice of black. The wings are vellum ovals that I used some glitter pen on.

I added the clouds to the white background by using a sponge dauber and a scallop punch.

There's some doodling around the inside of the oval frame and the center of the daisy is a white pompom.

So, which is your favorite this one or the first?
Posted by Lorraine at 12:40 AM