Yes, I've been MIA. You would think that having Fridays off during the summer I would have time enough to get to the things that I want to do. But...... that's not the case.
I have been able to get in touch with some friends though.
On Friday, HWNSNBP and I had lunch at Joe's Meat Market in South Bound Brook. My sideline Dolly and her husband Joe serve the most delicious lunches!!! (They have dinners too. And soon there'll be even more. I'll keep you up-to-date!) If you're in the area, you really should check them out.
On Saturday I dropped off a little goody bag to my cousin Barbara who is recovering from some oral surgery. She's still in a lot of discomfort but I think we cheered her up a bit. (I found some old letters she had written to me in high school and gave them to her to read while she is recuperating. Funny the things you save!)
Then on Sunday, my friends Joan and Linda and I went to NYC to see Girls Night the Musical. It was a great show and a lot of fun and I couldn't have asked for better company. We took the train and did some walking and managed to avoid getting rained on until we returned home.
In between all that I've been working on a little project which I'll share the beginnings of below. Just the pictures now - I'll put it all together when it's done. 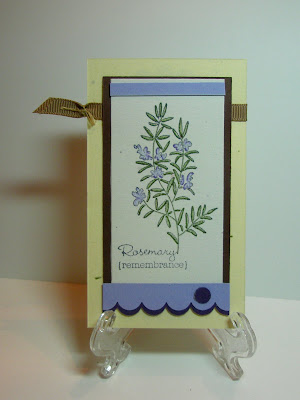 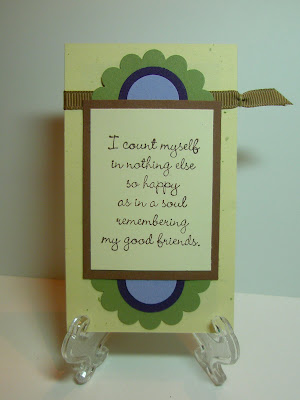 And tonight I wanted to make sure that I had a birthday card ready for my sister Karen. Her birthday is this week and I will probably be stopping by to see her Wednesday, so I needed to be prepared. 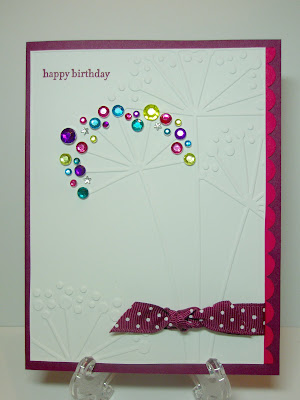 This card was inspired by a card I saw on Julie Ranae's blog. She made her card for the CAS challenge this week - Show Your Bling. I had one of the same embossed panels on my workspace just waiting to be used. I found some jewels and added them to just one flower to make it stand out. The picture really doesn't do it justice. It really is much prettier IRL.
Thanks Julie Ranae for your inspiration.
Posted by Lorraine at 11:13 PM