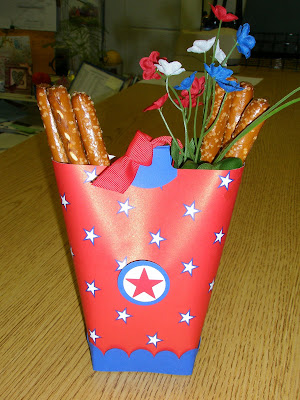 I showed you the flag bags that I made - then I decided to do these with the stars. I had some good suggestions as to what to fill them with, but I got caught up with a few dr. appts. last week and had to settle for pretzel rods (which if I planned it right, would have been dipped in white chocolate and red, white, and blue sprinkles - suggested by mousechirpy) which might have passed for sparklers, and rolls of smarties, which I thought might look like firecrackers.

Some of the other suggestions were pixie sticks and red and blue licorice sticks - all great ideas which I want to thank you for!!!

We spent Thursday afternoon through Saturday morning at my friend Joan's condo in Barnegat. We had a great time. On Thursday afternoon, HWNSNBP and Joan and I did some crabbing on the dock. Joan was the only one catching any keepers and the catch of the day was another crab trap!!! She pulled that up with one of the traps that we were using. We usually don't do any crabbing at this time of the year, but they were catching them, so we thought we'd give it a try. We even saw two young men pull in an eel and a sand shark on their fishing lines.

Our friends Ray and Linda arrived later that evening and on Friday morning we all jumped in the van and headed over to Long Beach Island. We drove out to Barnegat light and walked to the point. Yes, even me. I stayed on the rocks thinking that it would be much easier on my back, but about 2/3's of the way there, it started raining lightly and I did get a little worried about slipping and falling - I couldn't get off at that point because it was high tide and there was water about knee deep on the land side. I toughed it out and my friends patiently waited for me to join them oceanside.

I decided to take the sand route back with them and on the way back we met a young woman who works for the state endangered species. She was video-taping a Piping Plover chick and its parent(s). She was very knowledgeable and we were very inquisitive. She even told us where we could find a nest with eggs that weren't going to hatch. So we booked on over there by car and were surprised when we got there (because it was quite a distance) to see her and her mother coming up over the dunes to greet us. She let us near the caged area (the cage was around the nest to keep predators away, but in no way hindered the coming and going of the birds. If you have a few minutes please view this slideshow about plovers.

We dropped in on our friends Bob and JoAnne, had some lunch and then headed back to the condo. There was a little more crabbing and then a lot of people watching as the cars started to pour into the lot across the street. We did not have to leave the condo to watch the people or the fireworks. It was a great show and a great mini-vacation. The slide show is in the post above.
Posted by Lorraine at 8:07 PM