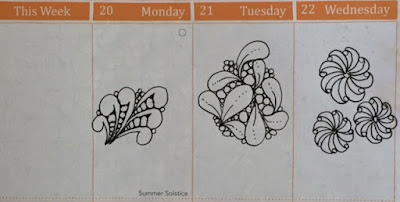 The last few weeks of June were like a blur.  The end of the school year is often like that.  That and we've been traveling more and of course the ICAD challenge have taken up a lot of time.  But I am determined to fill this book this year.

Email ThisBlogThis!Share to TwitterShare to FacebookShare to Pinterest
Filed Under: Zentangles