Looking back I know I've posted this first one before, but I just wanted to show the difference in the medium that I used.  This one is with pencils - Caran D'Ache Pablos. IRL you might think that it is stitched with colored thread. (Hmmmm, could that be the next way I try to do these?) 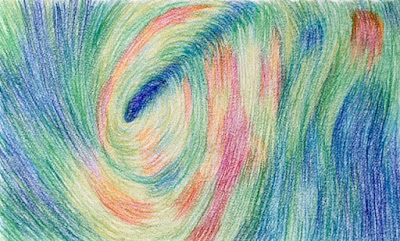 A different set of markers for this one.  I don't know the manufacturer.  The markers are double-tipped and the barrel is unmarked and silver. What I do know is they are an inexpensive set.  I tried these because there were a couple of shades of the blues and the greens. 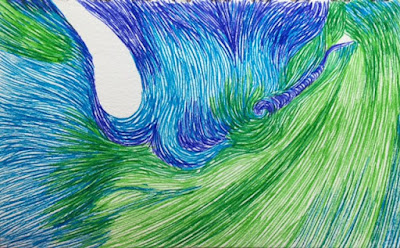 Today was the last day of school before our spring break.  Ten days!  Sometimes, at the end of the week, I key up a song to play over the intercom as the last bus group leaves school.  Most often it's been Pharrell Williams' "Happy".  Last week it was "I Wear My Sunglasses at Night".  Today one of the teachers in the office this morning started singing "All You Need is Love" by the Beatles.  This was in response to it having been a very, how should I say.....difficult week as far as personalities getting along go.  I told her that I was going to play that song at the end of the day - it was agreed.  And I did.

Our wiseacre gym teacher, who is young enough to be my son was in the office and wanted to know "what era" that song came from because "he had never heard it before" as the rest of us were singing the refrain.  I told him jokingly he needed to get out!  Then the phone call came and I thought it was just going to be a teacher telling me that I left the mike on and they could hear the music, but no, the day and week had to end with letting me know that two students who were supposed to stay for tutoring were unaccounted for.  Sheesh!  I am soooooooooo ready for 10 days break!!!!!!

Email ThisBlogThis!Share to TwitterShare to FacebookShare to Pinterest
Filed Under: Just a "Little" Journaling