Standing at the kitchen sink this morning, it was barely light out when something caught my eye. There was movement around the birdhouse up the hill.  I strained to see if my eyes were fooling me. Yet I couldn't be sure until I found the binoculars.  I gained just a bit more daylight in the stretch of time it took me find them and focus.  Was that a bluebird I was seeing?  The sun hadn't quite blessed me with enough solar power to see the color of the bird, but it was a bird.  Then, as I kept the binoculars pressed to my eyes, the beautiful blue feathers were illuminated.  There he was, standing on top of the box.  I couldn't hear him, but I was sure that he must be calling to his mate.  "Come see the house I found for us."

HWNSNBP had just set up the new camera and TV the night before so I quickly went over and turned them on.  Yes - I could now hear him.  And then he entered the box, did some circling inside, pecked at the bottom a few times and flew out.  He sat down on the top again and I got busy making my lunch.  When I glanced over at the screen again, there were two birds in the box.  She heard him. She came to check it out for herself and I swear I saw a short blade of grass in her beak. They both flew out and took turns for a while going in and out, he sitting on top when she was in, and she sitting on the fence post across from the box watching him, I'm sure contemplating whether this box was worth of bringing up a family. 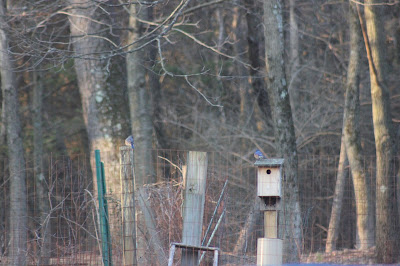 I couldn't get any closer with my camera through the kitchen window - this is blown up as much as I can without losing all clarity.  Suffice it to say that this was a very nice start to my day.  I wish I could have spent more time watching them, but time was ticking away.  I didn't get home until later this evening because of an appointment after school so I did not see any afternoon shenanigans - but I have hope!