Tangent - one of those words with multiple definitions.

":  diverging from an original purpose or course :  irrelevant<tangent remarks>"

Let's start with the first and consider a little art project.  Daisy Yellow is doing a weekly series on Tangents and Tactics and I tried the first one.  Starting with a common point - the center - adding radiating lines, then color, then design, then color, then more design, etc.  I picked up a small set of gouache and had a very cheap set of watercolors and this is my endeavor at week one's project. 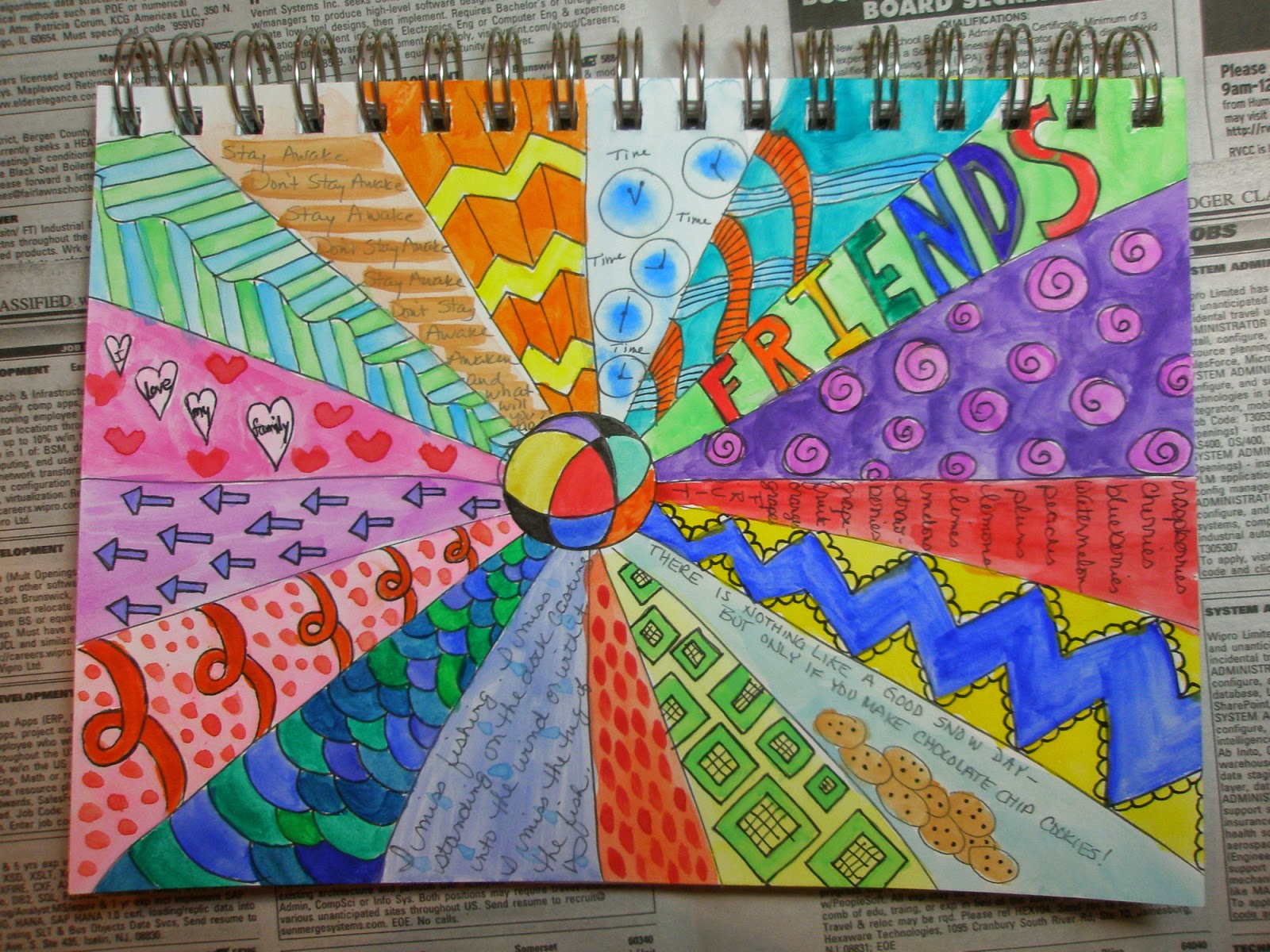 Yes, it's a bit of a mess.  I think impatience played a large roll in that. (And also the fact that I still can't sit without pain.) And when I said a cheap set of watercolors, well, they feel like dust when they dry and they also rub off on your fingers, which is what led me to order a hopefully better set online today.  I remember my first set of watercolors that was a Christmas gift as a child and even those, all those years ago were of better quality than the one's used here.  But it all can't be blamed on the quality of your materials because I've seen some pretty darn good art created with pretty bad ingredients so let's just say I've learned a bit about what not to use and what not to do with what I do have the next time.  This is an art exercise (which seems to be all the exercise I am getting of late also).

Will I continue with the series?  Not sure.  I've checked the materials list and some of the things I know I don't have and don't know when I'd get a chance to get them.  So maybe I'm destined to do this one over and over again.  We'll certainly see.

But on to the other tangents.

You know what next week is?  Shark Week!  And apparently my daughter and my daughter-in-law really enjoy this week of watching sharks on TV.  So, to keep myself occupied whilst standing the other day I created these 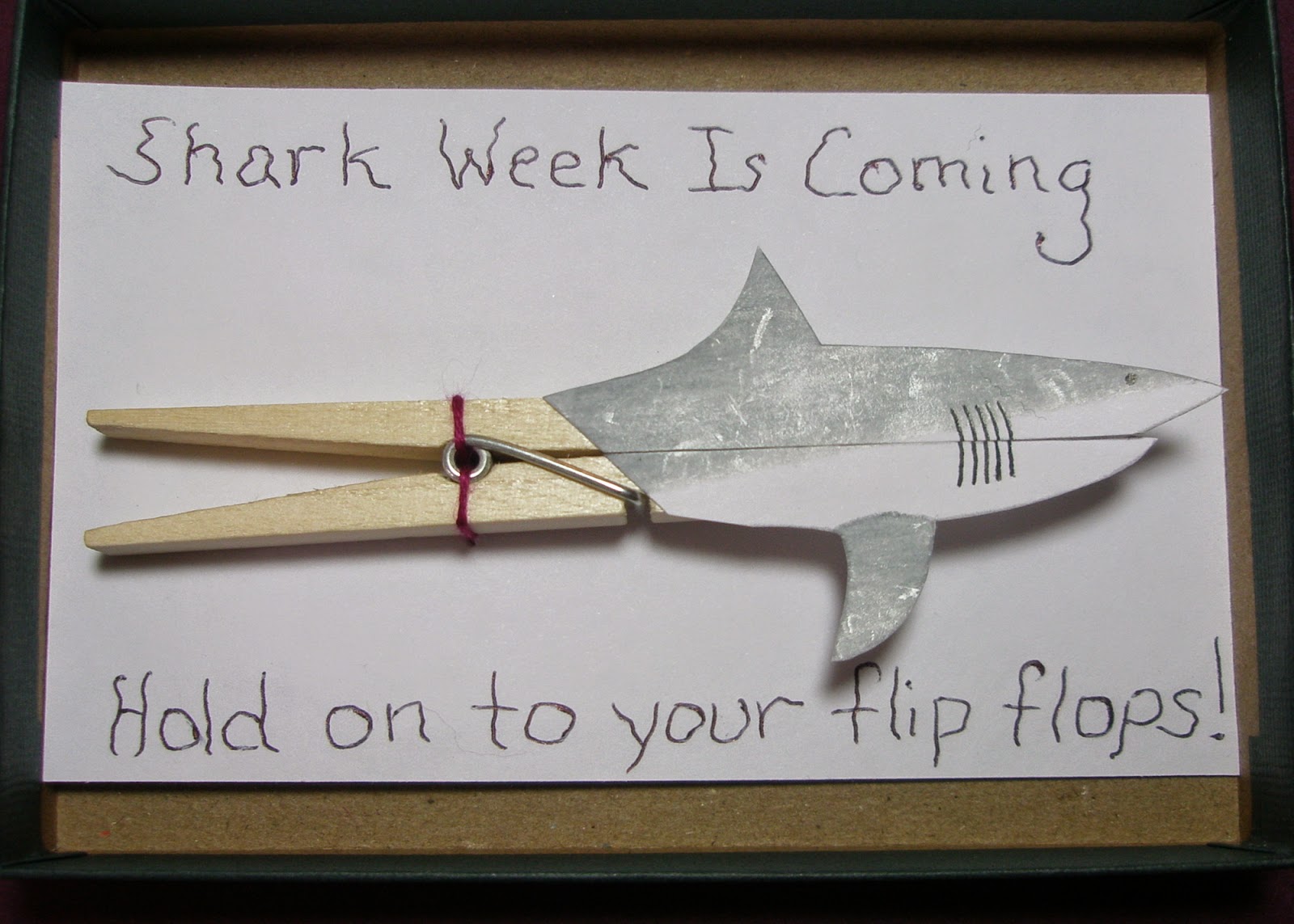 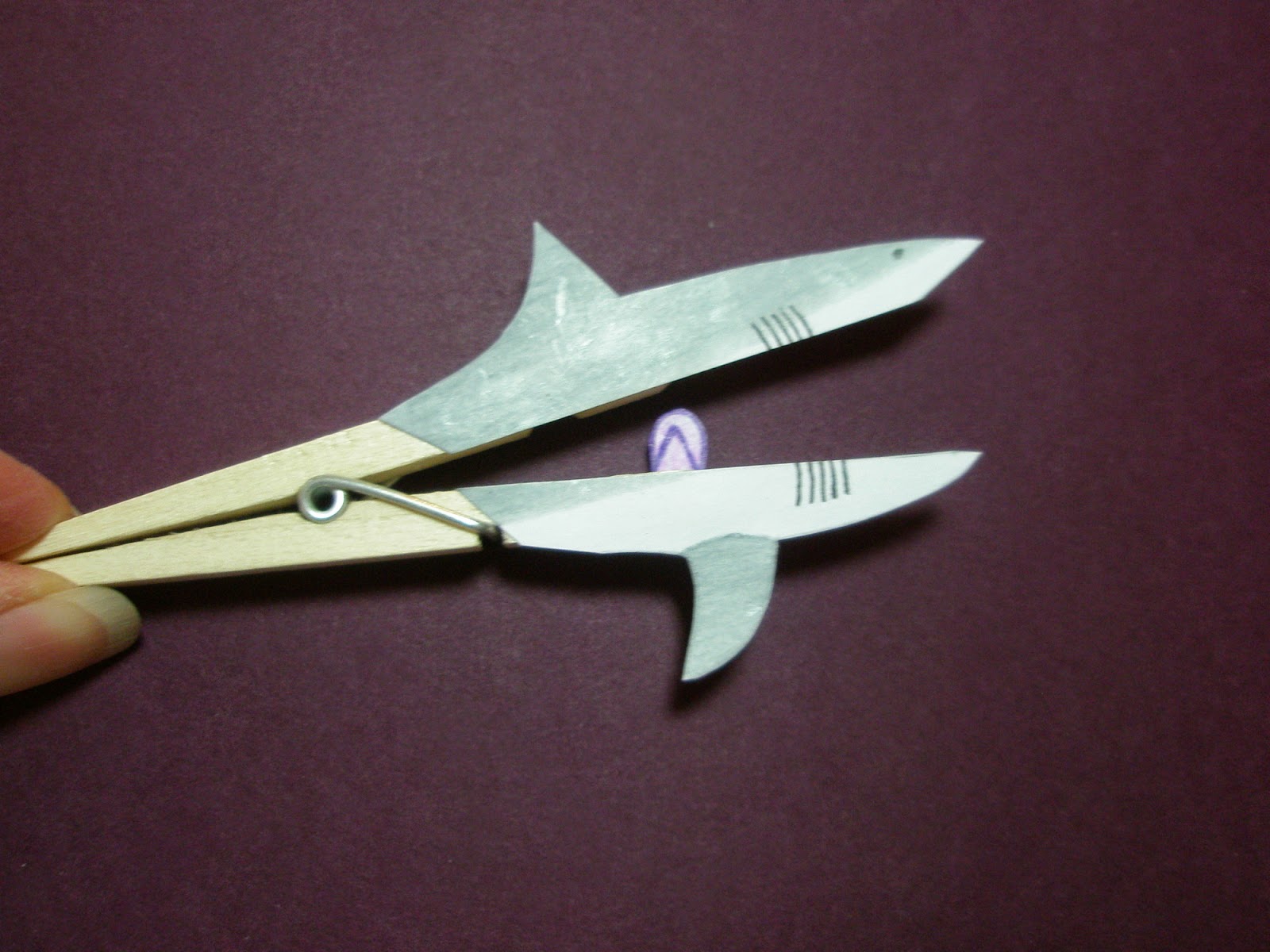 Something I saw on Pinterest that has absolutely no use other than to be cute, if you can call it cute.  Enjoy the horror ladies!

And another tangent that had me in horror was when I picked up my somewhat expensive camera to take a picture of this lovely plant outside the kitchen window with the sunlight shining on it (I would tell you the name, but somehow in the last 10 minutes the name has escaped me - it must be on a tangent of it's own) 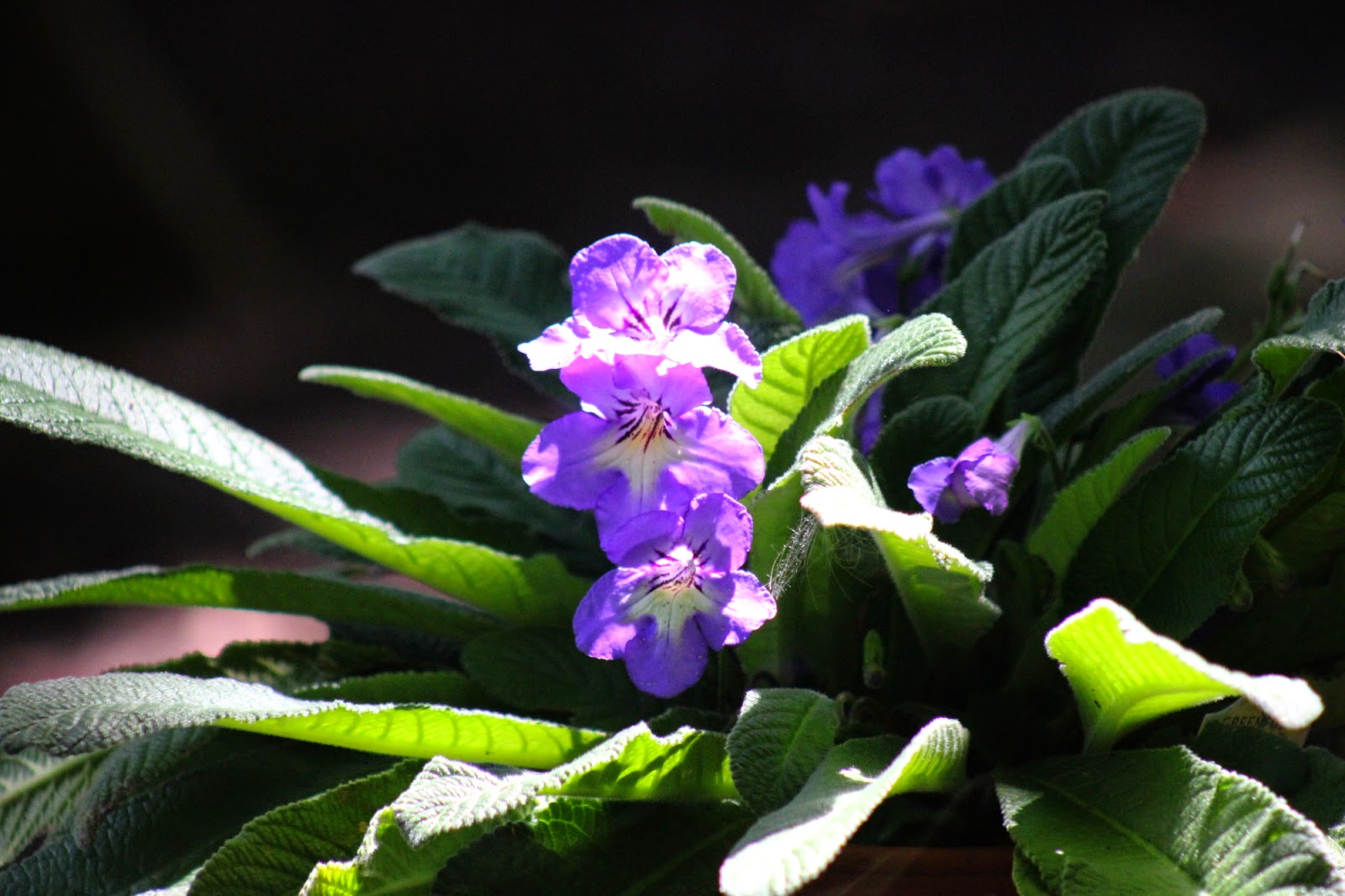 and as I went to focus in on it I kept getting a error message in the viewfinder and the camera would not let me take a picture.  I was already in a horrified mood that morning as I had woken up with a line of spider bites up my left arm so I pulled all the bed linens off the bed to be washed, threw the first load in and then promptly couldn't find my cell phone.  I thought for sure that it somehow got added to that first load of wash that was already swishing away in the washing machine. But after wearing myself out clomping up and downstairs several times, I found it...........in my shorts pocket......... but not the one I normally would carry it in.   And now back to the camera tangent......I tried taking a picture again and this time on the screen it said something on the order of memory card malfunction.  So I popped out the memory card and then put it back in and thankfully, it worked.  I must have not had it set properly.  But there I stood, now trying to focus on something to take a picture of........ 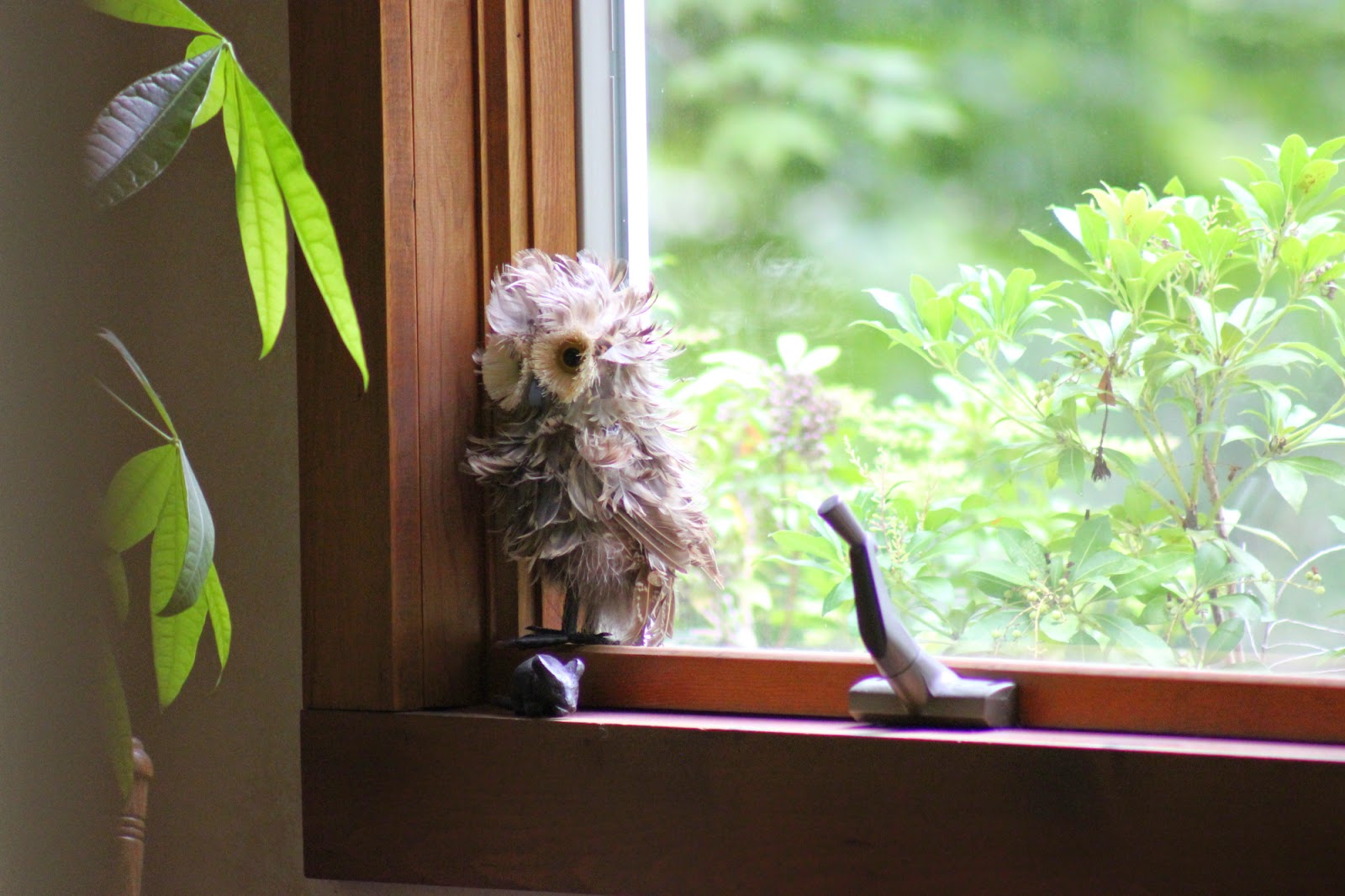 The owl and mouse on the window ledge in the corner of the living room.  Don't they look happy there?

Streptocarpus - that's the name of the plant.
Posted by Lorraine at 12:05 AM

Email ThisBlogThis!Share to TwitterShare to FacebookShare to Pinterest
Filed Under: Ramblings, Tangents & Tactics