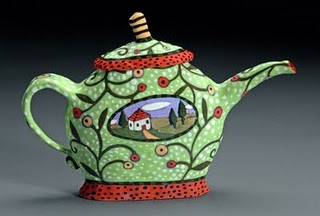 It's Tickle a Teapotter Tuesday once again, and geez, Louise, I'm just now remembering that I never shared the card I received last month.  I'll do that later, I promise - gotta charge my camera first, I just made it with these pictures.
But anyway, don't you just love the teapot above that Cindy chose for us this week.  I do.  I swear I think I've seen a quilt like that someplace, which is where I got my inspiration from this week.  That and the fact that we are supposed to include numbers in our card in some form and I wanted to use this IKEA paper measuring tape that you can get when you first enter the store.  I think I must have about 42,000 of them.  HWNSNBP always just shakes his head when he sees me tear one or two (or three) of them off when we head in to shop.  Especially since we seldom if ever use it, but hey, it's free and it's useful and doesn't take up too much space.  And I wonder if he'll even notice that that's what's on this card! 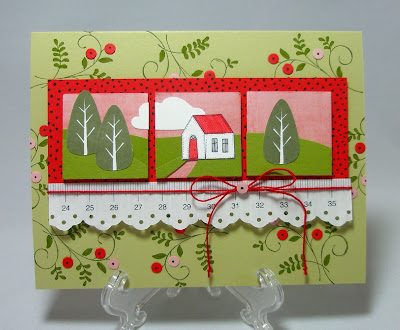 I used stamps from three different sets - the house is from Quilt Quips, the trees from Trendy Trees (and I think this is actually the first time that I used that tree as a tree!  It's been a carrot and a fish on previous cards!), and the background stamp stamped on River Rock CS is from the SAB set Sweet Summer.  The trimmed cloud and the dots on the flowers came from the Create a Cupcake punch.  I added some simple red cotton string for a bow that doesn't overpower the tryptch which is paper pieced with those added images.
All those black dots on the Poppy Parade CS are done by hand with a black marker and probably took the longest time to complete - or at lease it seemed that way which is why I purposefully left out the white dots on the background paper.  Oh, and you might be wondering why my sky is Blushing Bride - well, that's because I printed the picture of the teapot out to bring upstairs to work on and that's the color the printer printed it.  I thought it matched the flowers.  Oh well - it doesn't look so bad does it? 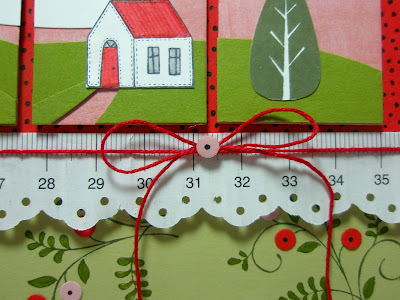 Now I'm heading over to the gallery to catch the other wonderful creations of the week.  Can't wait to see which one will be coming my way!
Posted by Lorraine at 3:18 PM