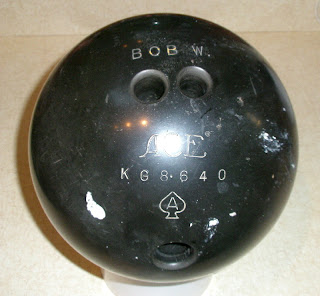 This is Bob W.  Bob W is a bowling ball.  A pretty well-worn bowling ball at that.  Bob W doesn't realize the potential that he really has.   Time for a makeover, Bob W!
After a good washing, we'll give you a coat of white indoor/outdoor glossy acrylic paint. 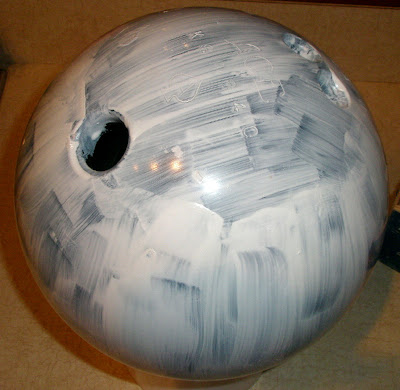 That didn't hurt now, did it Bob W?
Now lets slap on, gently of course, some blue paint.  Some bright, some dark, we'll mix it up.  A little dab here.  A little dab there.  Ah, looking better already.  Do you feel a little bloated Bob W.  Kind of under the water?  Not to worry.  There's a reason for that. 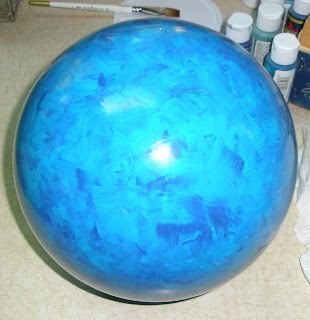 Time to get out the orange, yellow and red paint Bob W.  This may tickle a little.  We're going to make some snazzy seaweed, or perhaps we'll call it coral.  And then we'll spray you with some clear glossy sealer.
What's that aluminum tape patch for you ask?  Hmmm, let's see.  Well, Bob W, it's the beginning of a symbiotic relationship.  We're going to need some GE Silicon II Window and Door caulk, some glass bubbles, and some flat and some jellybean marbles.  No, you won't need the Colace or the pencil.  How did they get there! 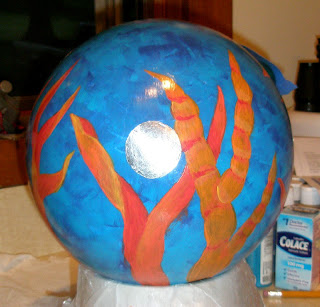 We'll use that caulk to adhere a bubble over the patch so it looks a little shiny.  Then we'll add some more caulk and one flattened and four jellybean shaped marbles, and, oooh, look at that - a Turtle! 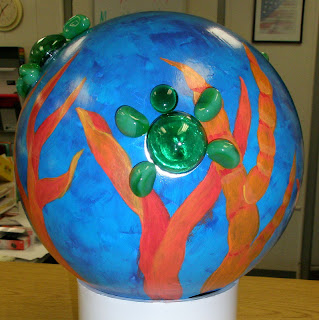 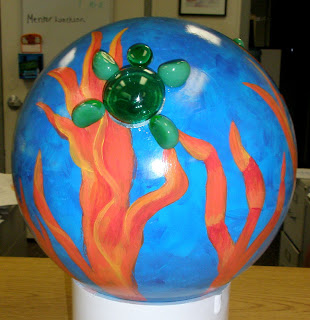 And yet another one! 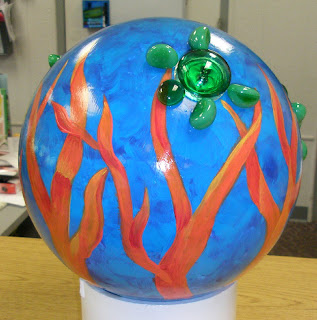 Three turtles swimming amongst the coral to keep you company Bob W.  What do you think?   Oh, and you have a seat now too Bob W.  It's a simple seat you can find in the hardware store - just a PVC ring.  And your finger holes won't even show now Bob W.  They'll be hidden by the seat!
Now you can be put in a place of honor Bob W.
Posted by Lorraine at 10:00 AM

Email ThisBlogThis!Share to TwitterShare to FacebookShare to Pinterest
Filed Under: Bowling Balls