I really like to print out the calendar from Daily Holiday Blog.  Usually I print out two of them.  One for home and one for school.  As I look it over just before the new month starts, I like to write down the holidays that would be easy to celebrate.  As I was doing this last week, I had an idea about the first day - National Homemade Cookie Day.  I sent an e-mail out to the school staff and invited them to bring in homemade cookies on Monday for a "Cookie Fest".  In the e-mail I suggested just bringing in a couple dozen, and freezing the rest of the batter for the upcoming holidays or to have for company.  Then, with the permission of our principal, I also added that anyone who didn't bake was welcome to sample by making a small donation.  Any money collected would be put aside for our students who are on our Free/Reduced lunch list for items that they might need during the school year.  It was so well received - 18 people signed up to bake. 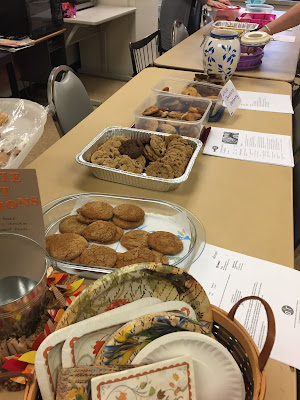 Someone suggested bring the recipes too. 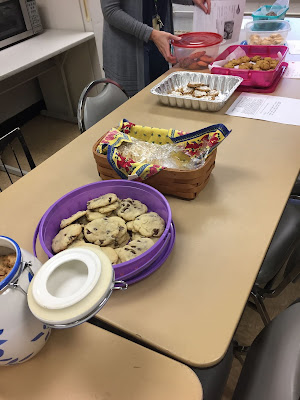 I decided to make Pizzelles.  It's been more than a year since I'd made them.  The recipe is simple, it's just time consuming to bake them 2 at a time in the press.  And contrary to what I had suggested, I brought the whole batch in. 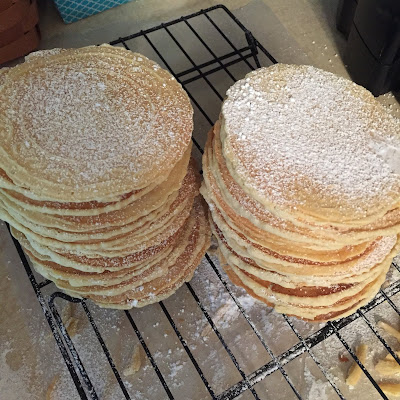 In my head I pictured the tables set up with fall decorations and tiers of cookies.  That didn't get out of my head.  I did find a bucket at home and made a sign to put in it.  And my eyes happened to fall upon the recycled fall paper wreath I made several years ago.  The bucket fit perfectly into it, so that became the only decoration that we had.  (picture taken at home) 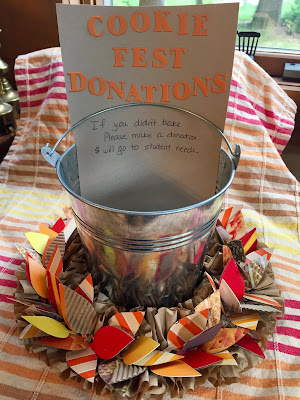 I was so set on getting my cookies done early on Sunday that I forgot to pick up plates and napkins, but I had a good stash of various plates and napkins at home that I was able to put in another basket to bring in and there was plenty.  Those that baked got first dibs first thing in the morning. Some of the teachers even brought in a separate container to use for stocking up.  All-in-all it was very successful for a last minute thought.  And we actually collected about $30 throughout the day.

Email ThisBlogThis!Share to TwitterShare to FacebookShare to Pinterest
Filed Under: holidays, Ramblings