Last Weekend in Pictures and Our Beautiful World - Bridge

HWNSNBP (He Whose Name Shall Not Be Published) gets up before the sunrises to get on his way to LBI to surf fish.  On his way he passes the bay beach around the corner from us and if his timing is good he might catch the sunrise as he did last weekend. 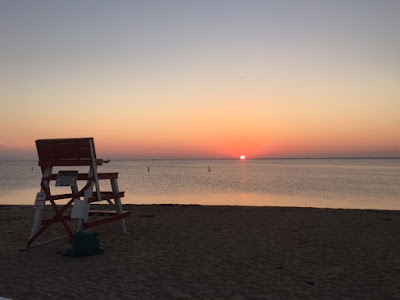 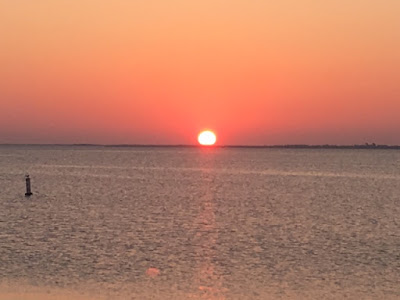 He also happened to catch all these white birds (egrets) very close to the road opposite the bay beach. 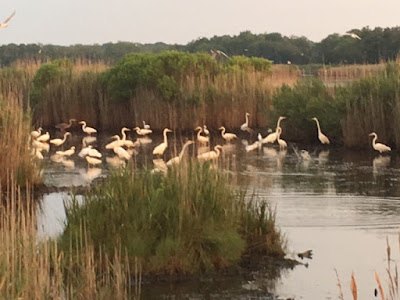 And you can see that many of them took off as he approached. 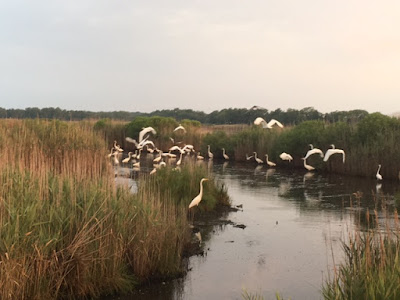 Since our condo is on what is call "Pirate's Peninsula" you either turn left to go around past that bay beach to get to the main road (Rt. 9), or you turn right to go over a little bridge which takes you into what some consider the "main street" of Barnegat and also to Rt. 9.  The little bridge was closed from October until just before the 4th of July which made the choice a no-brainer.  Not having that way out though was precarious in bad weather.  There were several times that the bay flooded the road during storms and once this winter (when we weren't there) the area was evacuated as they knew that people would be stranded in the snowstorm. 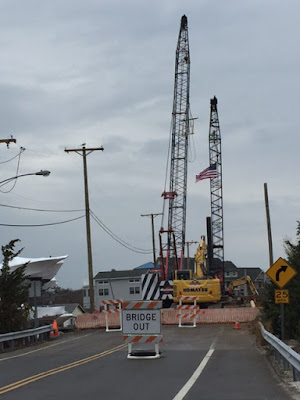 Sunday we had our annual crabbing trip with our Table 7 group.  We rent a pontoon boat and the 9 of us pile on with our drop lines, fishing poles, and one crab trap.  It was hot as Hades last weekend. The temperature was said to be 100º but the feels like temp was at least 111º on land.  On the water it was a little more bearable (except for the darned flies!!!! - the biting kind!!!!).

We move around the bay trying to find a good place to drop the lines and eventually we do go under the bridge to explore the waterway that it spans. 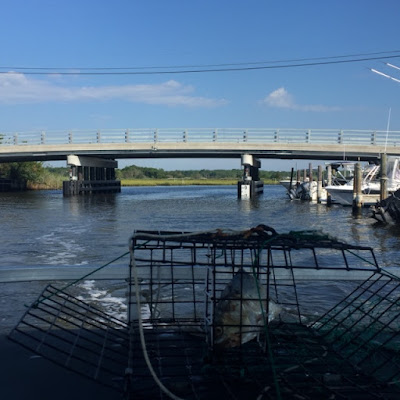 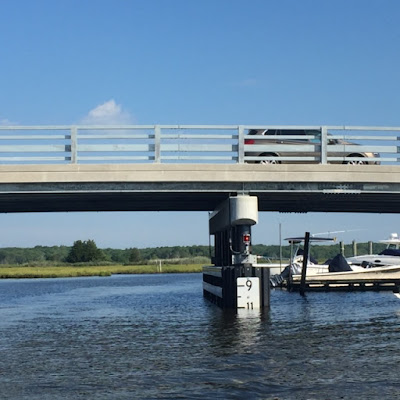 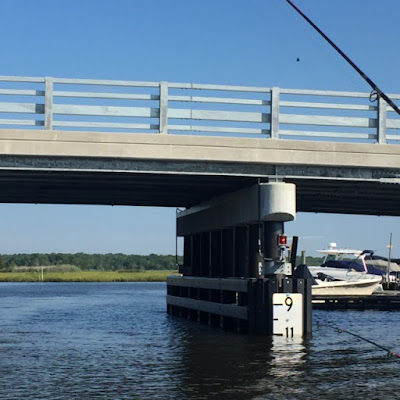 And when you don't have any luck in that area - you head back under the bridge. 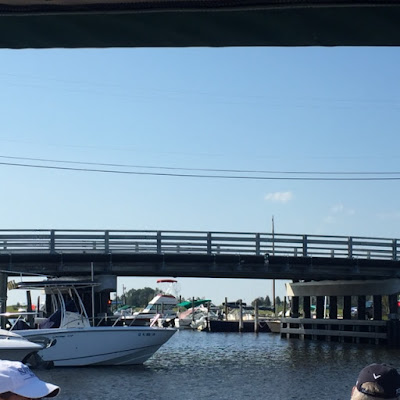 Here's HWNSNBP hamming it up with a sea bass that he caught and then threw back. 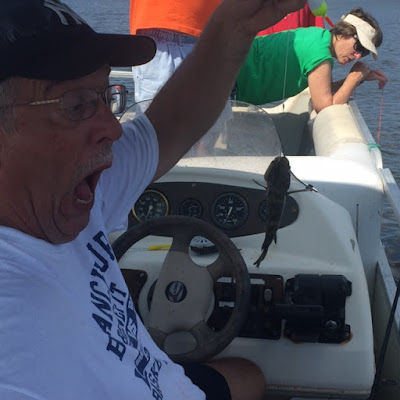 The highlight of the trip for me (aside from catching 2 of the 5 fish we caught that day) was the swan encounter.  This swan left it's group that happened to be swimming by us to come and check out the boat probably looking to see what we had to share.  (This is the first time that we have had the swans around, usually it's just the seagulls looking for a handout.) 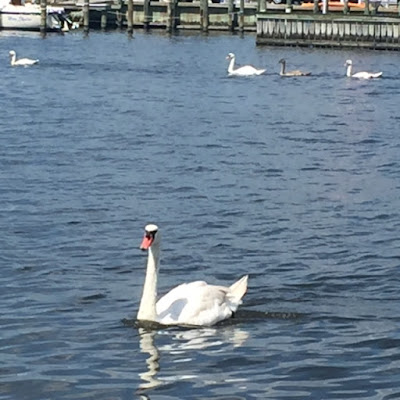 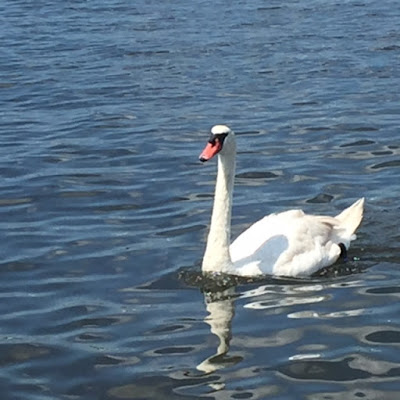 But we were not going to throw anything to it to encourage it to get any closer so it turned around and swam away and back to the little group. 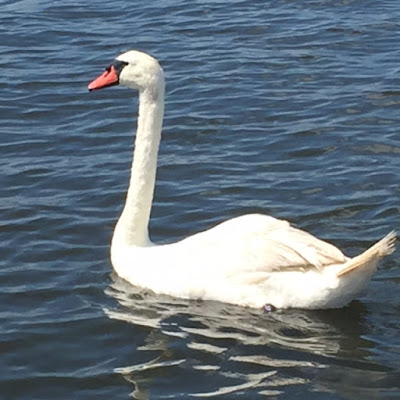 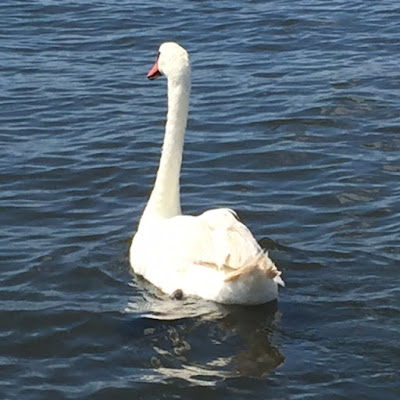 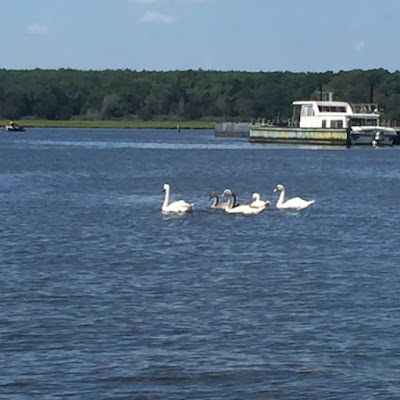 Even though it was not a very productive day crabbing and fishing, we always have a good time with our friends.  There is laughter, sarcasm, playful complaining, and a lot of "remembering when".

One of our friends' mother is a bit under the weather and was undergoing a health procedure this week so I put together this card for her when we came home from the weekend.  This die can be used as leaves on a tree or like this as a flower head which I think reminds me of the Queen Ann's Lace that I posted last time. 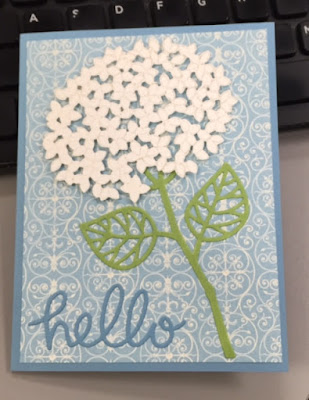 I took a glitter gel pen and defined the petals some more. 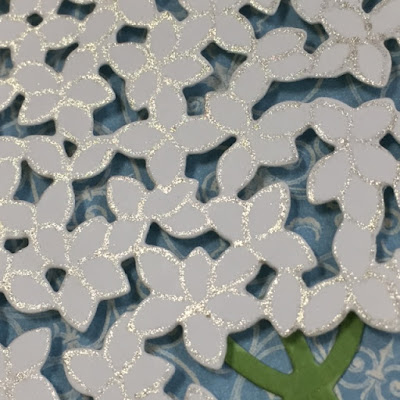 Well, I know my bridge is very standard but useful and now I'm on my way over to Our Beautiful World to view some bridges from elsewhere on our planet.  Stop by and give a look if you can.

Email ThisBlogThis!Share to TwitterShare to FacebookShare to Pinterest
Filed Under: Our Beautiful World, Ramblings in Photos