Yesterday was my sister's birthday.  I had this piece of watercolor paper that I had experimented with during the Dare to Get Dirty Challenge week that I didn't use (actually there are several pieces like this).  I had taken my ink pads and just swiped them across the watercolor paper and because it is textured it had this kind of cool effect that I thought I could use for water, however, the silver embossed fish did not show up as well on this background as on the one that I had used the Brushos on.  But I thought they were too pretty to toss so I'll have the backing for a couple of cards at the ready.

I found these die cut pieces in my scrap box and then I stamped the heart piece separately using my SU markers and my MISTI.  I'm still learning to use this new tool, but I already have seen good results with it, especially when stamping on watercolor paper. 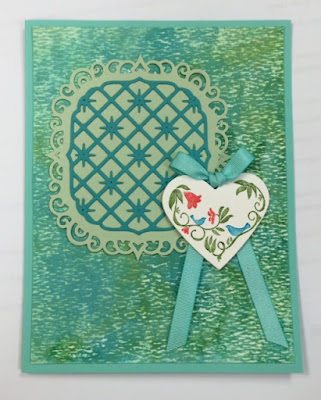 I hope the bow didn't get too smushed in the mail! 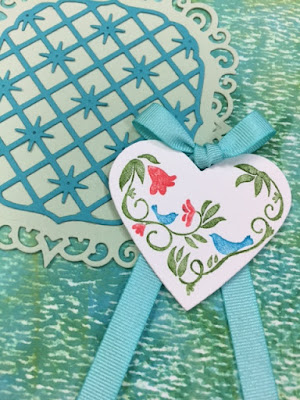 When I say it's been beastly hot I am not exaggerating.  We've had temperatures in the upper 90's for almost a week straight.  The heat index, or feel's like temps have reached as high as 115º with humidity that takes your breath away.  But before we settled into the condo on Friday, I wanted to get a couple of pictures of the sunflower that volunteered itself in the front which from a distance didn't look as bad as it did close up, and.............. 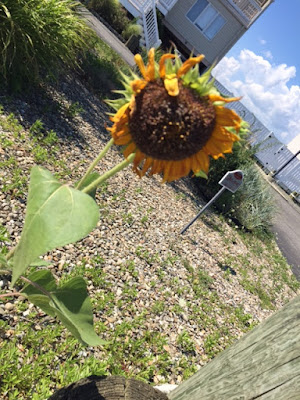 some close-ups of the Queen Ann's lace that has sprouted almost everywhere. 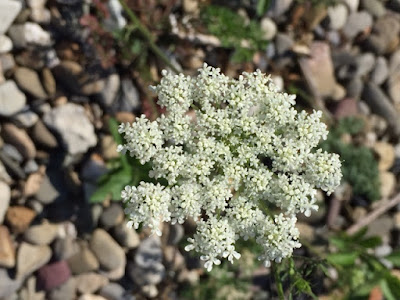 It is a pretty weed, but it really doesn't belong there and I would do some weeding there myself but not in this heat! 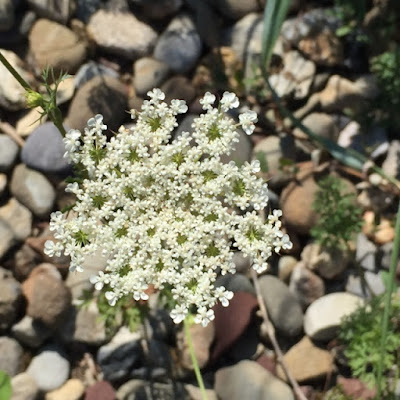 Our planter at the bottom of our stairs has been a challenge this summer also.  This is actually the third and last group of plants that we've put in.  At first I had just had the two thyme and lantana you see in the background along with some striped mini petunias and two more creeping thyme plants between them in the front.  The creeping thyme crept like crazy and choked the petunias so I removed that and added another striped petunia in the center to fill the space.  Well, they didn't like the heat or something, because they stopped flowering (as did the lantana, but I left that in anyway).  So on the last attempt, I picked up the blue salvia and some pink periwinkle and a new yellow mini petunia.  As you can see, the petunia is no longer flowering but the lantana is very happy in the heat.  And this is how it will remain until the cooler fall temps arrive and we can switch it up again. 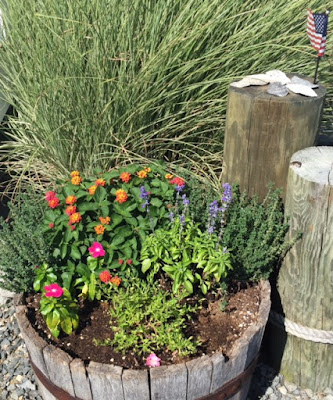 Email ThisBlogThis!Share to TwitterShare to FacebookShare to Pinterest
Filed Under: Birthday Cards, Flowers