Ombre Sky and a Finished WIP 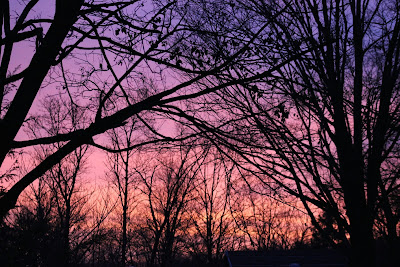 This was not today - this was actually last Friday morning.  I don't remember exactly why I was up a little early, but I think it was because our neighbors' car alarm went off at around 5 a.m. and then again 20 minutes later and at that point I couldn't get back to sleep.   I'm not an early bird but I was glad that I was up a little early to catch this beautiful sky.  HWNSNBP thought I was a bit nuts to grab my coat over my pajamas to run outside in the cold to try to capture it, but it paid off.  He even had me send the picture to him to update his screen saver.

I wish I had a better picture of what the evening looked like.   We had some extremely cold weather that came through with a quick snow.  I was turning in early (probably because I was up so early) and I got a text message from someone just as I was going up to bed.  That triggered me to turn on the outside light to see if it was still snowing and it was like someone had dumped a truckload of glitter.  I don't think I've ever seen such sparkly snow.  This time though, I didn't want to throw on my coat and go out and thusly, the pictures through the windows just didn't cut it.

Earlier that evening I finished a project that I had started about a year ago.  This skinny heart-motif scarf.  I found the pattern here.  I used a little less than two 1.75 oz. skeins of Martha Stewart Merino Wool in 501 Milk Glass Pink which I picked up at AC Moore in the clearance bin for about a dollar a skein. 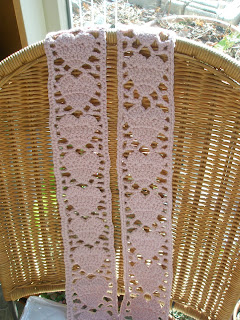 You crochet two halves and then join them in the center so the hearts appear right-side-up all the time. 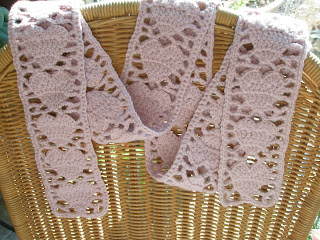 The pattern calls for only 12 motifs on each side but when I held it up to me, I decided that would be too short.  Don't know if it was because of the yarn, the gauge of my stitching, or the difference in my ample landscape and that of the model.  So I continued for 20 on each side.  And no, it's not too long, but since it took me so long to make it,  my stitching consistency was a little off and the sides don't exactly measure the same in length after I steam pressed it.  But unless someone is looking for the exact center around my neck it won't be noticeable.

I'm hoping to get myself more on track with finishing some of the many projects that I have started or have bought the ingredients for.  That is my goal for the year.  And I gave HWNSNBP a goal also.  There are a few creative projects that I want him to finish and we're both aiming for one per month.  I don't think that's too unrealistic.  We'll see how it goes (he's already a month behind).
Posted by Lorraine at 7:57 PM

Email ThisBlogThis!Share to TwitterShare to FacebookShare to Pinterest
Filed Under: Crochet