MMTPT239 - What Goes Around Comes Around 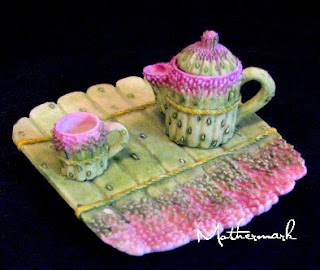 I wouldn't expect this to look familiar to many, if any, unless you've been around since 2008 and have been following my Teapot challenges.  Cindy posted this picture on her blog back in September of that year.  You can see what I did back then by clicking on this link.  Sometime after that Cindy sent this little tea set to me and I had it proudly displayed until I mailed it off to Sabrina in Ireland in December.  Cindy had dubbed us the "Sisterhood of the Traveling TeaParty" and thusly, I thought it was time for the little tea set to be enjoyed by someone else.  I did love having it  here and I'm sure that Sabrina will love it too.

In that challenge I had used some little pink shells and I did again here but in a much different manner. 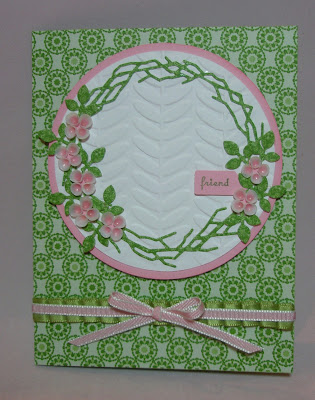 It was a bittersweet moment when I realized that the little shop where I purchased these shells is no longer there because of Superstorm Sandy.  That particular section of the Jersey shore in Normandy Beach was hit very hard.  My father used to go to that bait and tackle store and my husband continued to do so even after my dad and later the owner passed away.  I never minded going in there because of all the shells they had.  Whether it was just to look or pick out something special.  Those are good memories.  And now, I think they make pretty flowers.

So you see how this week's theme of "What Goes Around, Comes Around" applies here in many ways. 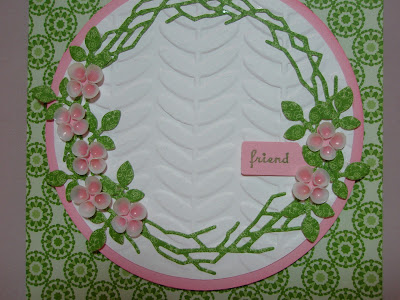 The only stamping on this card is the sentiment which is simply "friends" and it's from Tiny Tags.  I used my Memory Box grapevine wreath die and my Impression Obsession leaf die.  The embossing was done with the SU Vine Street folder.  There are two layers of SU ribbon. 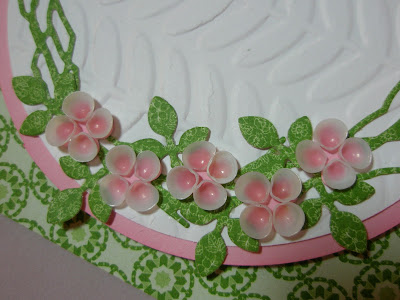 The shells were first glued to punched cardstock flowers.  I was finally able to find a new jar of Aleene's super tacky glue.  I really like to use that glue when I am gluing more than paper items together.  It definitely has to be in the jar (plastic) because it is so super tacky and I let it get even tackier by leaving the jar open for an hour or so when I first get it to have some more of the moisture evaporate.  I was able to hold the shells with my tweezers and just dab them in the glue since it was so close to the top of the jar, but had there been less in there a toothpick becomes the perfect applicator.

It's a little late now but I'm trying to decide if I should have used a bolder shade of pink cardstock and ribbon.  Hmmmm, I've still got more shells so I might just give that a go.

Here is the link to the challenge gallery - take a look at how the teapotter's have been inspired this time.
Posted by Lorraine at 11:49 PM