So I bet you thought this was going to be a Christmas post!  Gotcha.

This is our black walnut that was knocked over by the winds of Sandy.  Mind you, HWNSNBP stands 6'1" so this root system is quite extensive.  Behind him you can also see the old cherry that was also blown over. 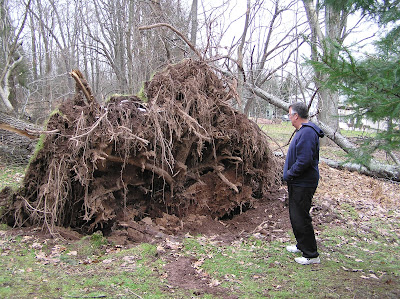 Here's the rest of the tree.  It has a slight crack running up the trunk. 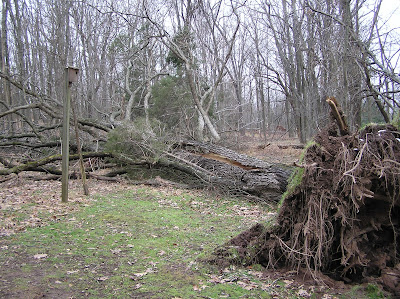 Now here is a closer look at the roots.   We bought this house when it was 40 years old and this tree was huge then.  We figure the tree to be close to, if not 100 years old.  There are all kinds of interesting things in that root system.  Bottles, jars, pots, cans.  It appears that it took root over an area that was used as a dump.  The tree is very near to the property line and when it rains heavily, that area sometimes looks like a brook coming down the hill.   So we think that people who lived around here may have filled in a natural stream. 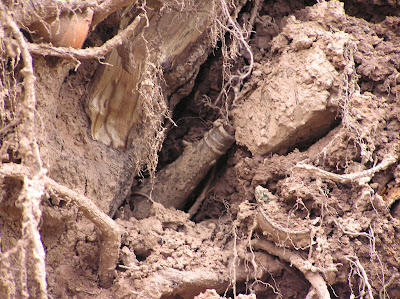 These are some of the bottles that HWNSNBP has pulled out already.  I'm looking forward to seeing what other "treasures" we might find. 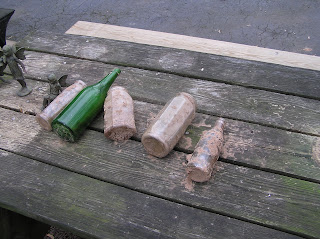 We've been told that the wood from this tree could possibly be of some value to a woodworker/furniture maker, so we will be looking into that before we cut it up.  The cherry wood is earmarked for his brother-in-law who likes to smoke fish and also has a fireplace.

Sadly, there were so many trees blown over from that storm that seeing the root systems upended in yards is commonplace.  There are some areas where it looks like Mother Nature was playing dominos with them and what remains looks like dark headstones in a very strange graveyard.  Removing stumps is not an easy thing to do yourself or inexpensive to have done.

As I drive to and from work - a mere 2.2 miles - the neatly stacked and layered branches and logs in front of houses has almost made it look like a rustic wall of sorts.  We are lucky that our township is picking this up.  In some adjoining towns it is the responsibility of the homeowner to transport it to a designated area and if you don't have a suitable vehicle for doing that, it only makes it more difficult.

Utility companies have estimated over 116,000 trees were downed in NJ alone.  And I think they are counting mainly the ones that have affected power lines on the roadsides.   There were thousands more in parks and backyards.