The Other Recycling Project

HWNSNBP was kind enough to bring me back hot chocolates on his trips out to wait in line for gas during our "storm recovery".  Looking at the corrugated cup wraps I was accumulating I wondered what I could do with them.  I had just gotten the Bigz leaf die and decided to use that to die cut some of them into leaf shapes.  Then it occurred to me that it would be nice to add some color so I went through the bag of recycling that we had and pulled out anything that had autumn colors. 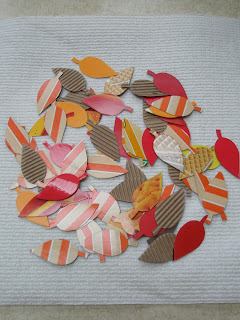 They sat in the bag for a bit because I knew that I would need to use a hot glue gun to use them however that might be.  You know I didn't think that I would be waiting that long to be able to use the gun and then when I could things like oh, Thanksgiving and pre-holiday cleaning  caused me to set them aside.

Finally last week I completed the project.  In my purging I found another piece of lightweight cardboard that was on some bakeware that was purchase quite some time ago.  Why I was saving that I do not know, but because it was already a circle with a hole, all I had to do was make the hole a little bigger. 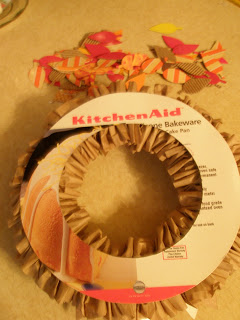 I kept to the recycling by using the brown shipping paper that comes in my SU deliveries.  I always fold it up and set it aside and have used some of it on occasion.  Don't worry, we have recycling every two weeks so I don't have an overwhelming pile of this stuff.  I don't keep it forever because I know I can always get more when the next order comes in.

What I did while it was folded was to cut a strip of about 3 inches from the end, ran that through my paper crimper and then used my fingers to make a gather along the center of it.  I added about 2 inches of hot glue to the circle about midway and kept doing that and pressing down the brown paper until it was completely covered.  Then I started adding the leaves. 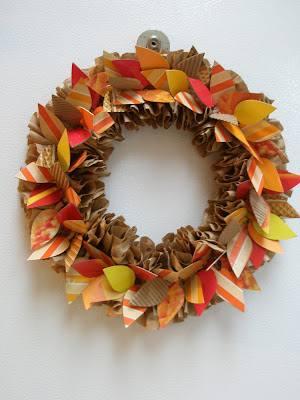 I like the way it turned out (minus the magnetic clip).  Of course, it wasn't up for long because we're fazing out autumn and bringing out the Christmas/winter decorations.  I've already used some more of the brown paper that way on another project I might be sharing soon.
Posted by Lorraine at 10:00 AM

Email ThisBlogThis!Share to TwitterShare to FacebookShare to Pinterest
Filed Under: Recycling