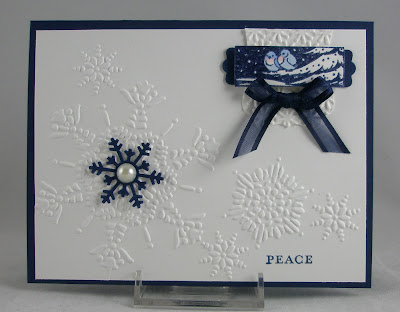 So............. for this card I embossed two ways.  I used an embossing folder for the snowflake panel and the punched tag was from the leftover cut out circle from the first card.  The little birdies in the snow image is a Picture Show Stamp (http://www.etsy.com/shop/pictureshow) that I first inked with VersaMark and then with Night of Navy ink and then clear embossed.  I then, very carefully, colored the birds with my aquapainter and inks.  I stuck that modern label punch behind it and added the navy bow.  The snowflake was an MS punch that I added a half pearl to.  I wanted something short to center at the bottom under the image and used the word PEACE.  Hmmmmmm, wish I had that stamp in just a tad bigger font!

Looking at this picture, the card does appear a little boring, but IRL the navy and white really pop.  I think it could be my picture taking skills were not up to par as I had only 12 minutes to photograph, edit, and post this post.  My fault totally - I had everything laid out last night and should only have had to put finishing touches on it.  This wasn't procrastination this time - just distraction.  I come home with a plan and in no time the plan is shot to ..........

It's been a while since I visited that Etsy store and I'm seeing a few more things I think I'll have to indulge in! But I will have to put that off until later because the weeds are calling to me.  I'm only waiting until HWNSNBP is far enough away with the lawnmower from the area that I want to weed tonight.  It has rained over the past couple of days and the grass is begging to be cut and the weeds are trying to take over all the flower beds!