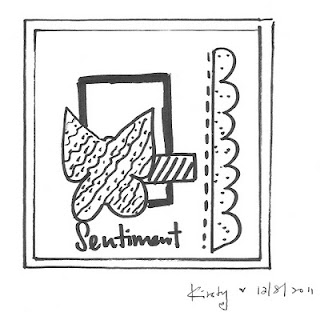 Yes, it's a sketch challenge this time, brought to us by the lovely Kirsty Vittetoe at Homemade Little Things.
I must admit that I was thrown a bit, not by the sketch in general, but by what looks to me like a butterfly.  I kept trying to look past that to put Christmas in it and it really was challenging.  I guess you could say that I was trying not to interpret it too literally.  So I pondered what I would like in that focal point.  And I pondered.  And I pondered.  (Strange word "pondered" - I digress, it's late.)  Then I started scrounging around on my worktable to see what I might have going that I could use.
I spotted a couple of die cut doilies that I had been playing around with using the new SU doily die.  It was too big for the card - drat.
But then I saw it.  I saw how I could cut it up and make, not a butterfly with wings, but an angel.  I die cut a brand new one out of Shimmer paper and then mounted it on Glossy White cs.  The center of the die became the head which I covered with a punched circle and then a jumbo sticky pearl.  The halo is just another circle of the same size mounted in the halo position. 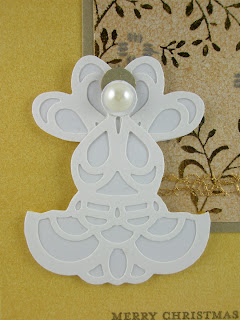 I used metallic gold paper for the card base (which unfortunately is showing up mustardy in these pictures), embossing the sentiment in gold also.  The "stringy" ribbon is something I found in the holiday ribbon section at Michael's back in November or December when they were on sale.  The floral paper is again something that I picked up at Mike's just because it looked so pretty with the gold and silver metallic highlights. 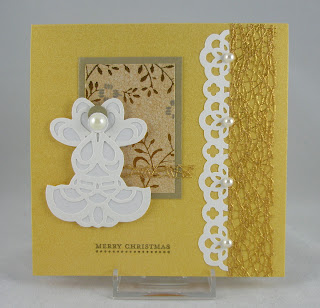 I tried to achieve some balance by adding the white punched lace border and the pearls.  Don't know if I'll get a second card made for this challenge, but at least I have one to show for it. 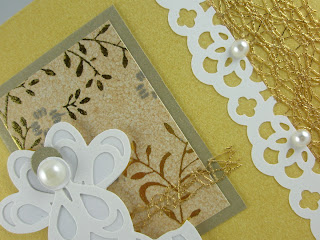 I peeked in the gallery and there are quite a few pretties there!  Click here to check it out.
Posted by Lorraine at 10:35 PM