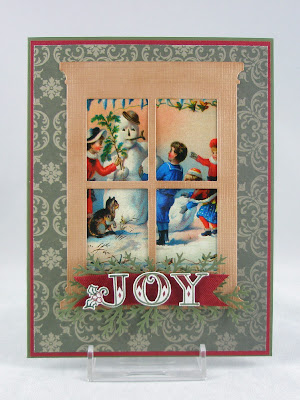 Whilst I was attempting to clean-up Christmas around here this past weekend, it occurred to me that the box of Christmas tea that I received from two of the teachers I work with had some lovely vintage holiday images that could be repurposed into cards and the smaller ones, bookmarks.  Then I got busy and almost totally forgot about making my card for the second week in January.
We are using the same prompt for two weeks, and while I'm sure that it's optional whether to make two cards during that time, I thought that in this case I would.
Here's the large box which contained 9 smaller boxes and all those potential reuses. 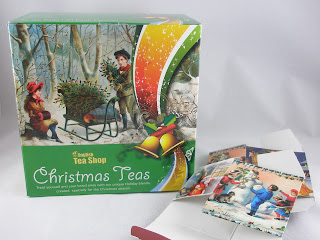 I was lucky enough to have received from HWNSNBP the Poppystamps window die that was on my list and was thrilled that the front of the smaller boxes fits perfectly inside the window frame. 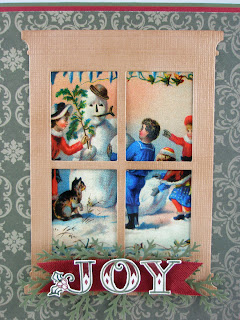 The card is on an Always Artichoke base with a layer of Cherry Cobbler and then some dsp that looks like vintage wallpaper to me.  I die cut the window out of textured Creamy Caramel cs and used a dauber with Creamy Caramel ink to bring out the texture in the cardstock.  The greenery was punched out of Always Artichoke and the banner is Cherry Cobbler seam binding.
There is some stamping also - JOY comes from a stamp I found in the $bin at Michael's.  I colored the letters with my markers to match the cardstock and fussy cut them out.  They are popped up with dimensionals on top of that banner.
I am having the most difficult time this week finding things that I "put away" before or during the holidays. Anyone else out there having that problem?  I know that I need to organize my "stuff" better - a project that will be ongoing for the next several weeks - but this has been really driving me crazy and taking up way too much of my time.  I actually was fearful that my new die and a new stamp set I got as gifts might have been inadvertently thrown out with the recycling or garbage.  Thank goodness I found them!
Well, now I will be meandering over to the Jingle Belles blog to see all the lovely creations for this week. I'm sure I will be delighted.
Posted by Lorraine at 5:57 PM