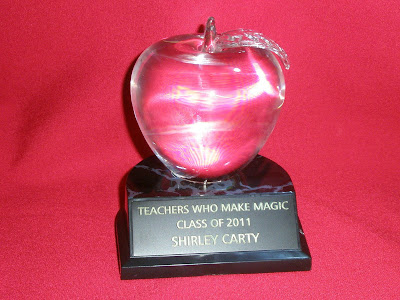 One of our local radio stations, WMGQ 98.3, aka Magic 98.3, sponsors an event called Teachers Who Make Magic.  Beginning in December they take nominations and after they choose the teachers from those that are nominated, they read a few of the essays on the radio each Friday until they get through them all.
This year I decided to nominate our physical education teacher and lo and behold, she was chosen in early December.  I won't reiterate my nominating essay here, but just let you know that this teacher is dedicated, inspiring, and full of energy - and she's a grandmother!
On March 10th they held a dinner to honor all the teachers that were chosen.  They called each one up to the stage individually and read the essays and as they left the stage they were given their award and met by the person that nominated them.
This is the centerpiece that was on our table which I was lucky enough to bring home.  Such a lovely mixture of spring flowers with those gorgeous roses and lilies tucked in.  (The lilies opened a couple of days later.) 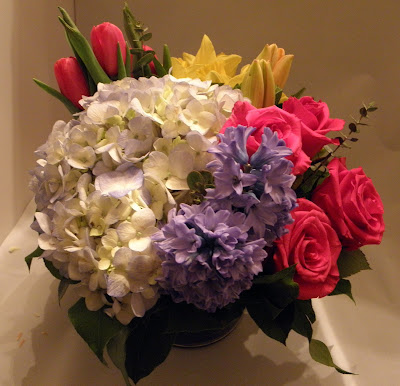 So once again I say, congratulations to Shirley for a job extremely well done!
Posted by Lorraine at 2:30 PM

Email ThisBlogThis!Share to TwitterShare to FacebookShare to Pinterest
Filed Under: Awards