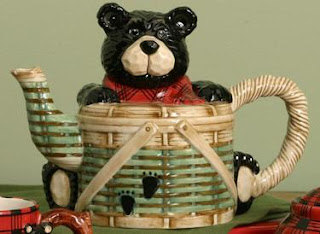 Hey Boo Boo, it's time to go to a pic-a-nic in Mississippi.  A tea party pic-a-nic that is!  This is Barney and he's guarding the basket.  So, I'll just have to bring a basket and a bear of my own.

This is Bearnice.  She brought an armload of flowers for the party and if you look in her basket, she has some tea.  Bearnice wants to remind you that it's Uterine Cancer Awareness Month which is why she has the peach tea.  Go peach this month! 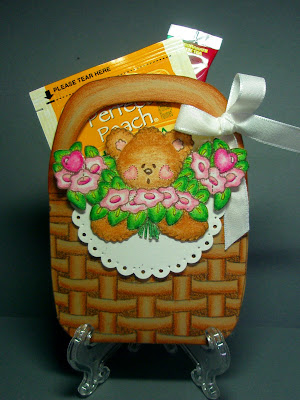 When I saw the tea peak on Cindy's glob I knew it had something to do with a basket and the feet I saw gave me a clue it might be a bear.  So I went in search of this basket stamp that you see.  It's probably one of the first stamps that I bought years and years ago.  And I did find it pretty easily, which was a surprise.
Then I thought I remembered a bear that went in the basket.  Well, I was not so lucky to find that one easily.  It took some doing, but here's the good news, when I found the bear I also found the ladybugs that I was looking for last week.  Ha!  You know that was really bothering me!
The basket is actually 3-D.  It folds on the bottom and has some tabs on the sides and forms a pocket.  That's where I've slipped in the tea bags.
I stamped the basket on Creamy Caramel and colored it with prismacolor pencils.  I did not blend the colors on the basket because I wanted it to look a little rough like the texture of a real basket.  The bear, however, was colored the same way, but I used odorless mineral spirits to blend the colors together.
I got my prismacolor pencils at a flea market in Vermont more than 30 years ago.  I remember I paid $15 for a set of 30 which, even though it was a flea market bargain, was a lot to spend at that time.  The kids were never allowed to use them (and since I've had them for 30 years, you could say I haven't used them much either).   I've added to the box since then, but I haven't used this technique in stamping for a while.
Take a peak at the card that Cindy made and all the other wonderful cards from this week's party over in the Tea Pot Gallery.
Posted by Lorraine at 8:16 PM