Have you ever had a homemade marshmallow? I was lucky enough last year to have a few that a friend of mine brought to work. They are nothing at all like the store bought kind. And you can flavor them. When I looked at recipes the only initial drawback to me was that you had to beat the mixture for 8 to 10 minutes. That's a long time standing for me so I wasn't up to trying it. But here's where Costco came to the rescue. They had a Kitchen Aid mixer on sale/special in late November and I kind of talked HWNSNBP into the fact that we really needed one of them. My secret purpose was the marshmallows (don't tell), but it will also help with the pierogi dough next year and lots of other things I'm sure.

So I went about doing some research for recipes and found this one for vanilla marshmallows on a blog called Brownie Points. I followed the full recipe for the vanilla marshmallows and used the half recipe for the cinnamon ones made with 1/2 cup of pulverized red hots. Because of the size of the pan used, the vanilla ones are "taller" and I cut them larger with all intentions of dipping them in chocolate and nuts - but that will have to wait until another time. 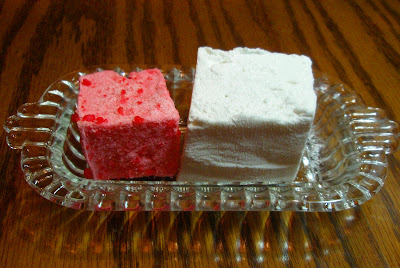 The cinnamon half recipe used a square pan that made the marshmallows a more manageable size. In the recipe itself it says to use a clean coffee grinder to chop up your red hots and if you have one, do it that way. I did not have a coffee grinder so I decided to use my food processer which is all the way in the back of a bottom cabinet and had to be dug out for this on hands and knees. The noise that it made and the toll it took on the plastic bowl were pretty pitiful. So I will be shopping for a coffee grinder in the near future should I choose to make these again.
I had set aside some nice Martha Stewart cookie boxes with dividers that I had found on sale at AC Moore the day after Thanksgiving. Sweet red and white 8" x 8" boxes with little boxes inside so you could put a variety of things without "mixing" them together. Unfortunately I should have checked the package more carefully. The divider sections and the food safe tissue paper that was supposed to be in there wasn't, which made the boxes unusable in a pinch because without the dividers the walls of the box collapse. The packaging was clear and I should have noticed the missing pieces. I guess I was just giddy with excitement at the price!!!!
So I had to scrounge around for some other packaging and came upon these small MS boxes that I had picked up on clearance in the fall. They are a minty green (IRL it does match the snowflake) and not your typical Christmas color choice, but I thought if I paired it up with a nice pink that I could get away with a pastel version of Christmas. I used a stamp from a retired SU set called So Many Scallops and Pretty in Pink and Certainly Celery ink. The ribbon is the Pink Pirouette striped grosgrain which I stapled some pink and green snowflakes onto the ends. 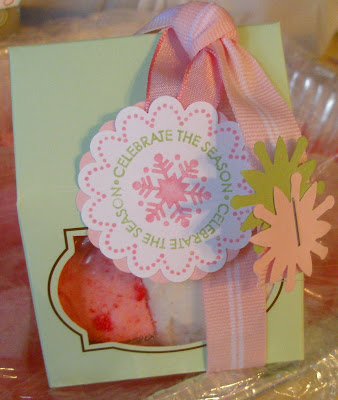 If you like marshmallows give the recipe a try. But remember to give yourself a day for them to set up (they need to sit for 10 hours before cutting).
Posted by Lorraine at 9:29 AM