Onward with the Challenge - to Tucker's Island Light. 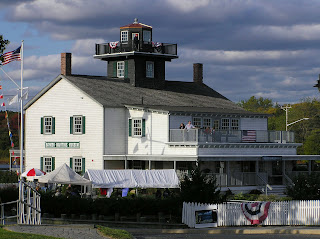 This is actually a reproduction of the original lighthouse that "fell into the sea in 1927 after years of pounding surf and beach erosion." It is part of the Tuckerton Seaport which has a museum and eateries and is expanding as a maritime village. (There's also a great Tea Room in Tuckerton - the Lizzie Rose) This is a quick stop for us usually as our goal is to get to the next stop before they close and with the added addition of the museum at Barnegat we needed to press on.
Barnegat Lighthouse or "Old Barney" as it is affectionately called, is probably the one lighthouse that we have had the most exposure to. We have been lucky to enjoy our vacations for the last many years at my friend's condo which lies across the bay from the lighthouse in the town of Barnegat. The lighthouse itself is at the northern end of Long Beach Island, and we usuallly drive out there once or twice while we are there. The drive during the challenge however is much quicker as it is "off-season" and not as many vacationers in mid-October. 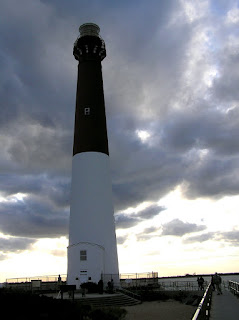 I have climbed this lighthouse a couple of times in the past. I can tell you that there are 217 steps, with some well-placed, catch-your-breath landings and a take-your-breath-away view at the top, which when you stand on the north side, makes it appear that you are right over the water. Spectacular!! This January 1st, Old Barney will be lighted again in commemoration of it's 150 yr. anniversay. It will be outfitted with a pencil-beam which will help the local community to avoid "light pollution" from the tower. 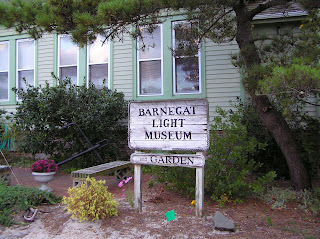 The Barnegat Lighthouse Museum was sort of a well-kept secret for us as we had never really known about it until the challenge brochure was published this year. It is only a block or two away from the lighthouse itself but we had never ventured over there before. Upon visiting it during the challenge, we decided that we will definitely have to come back while on vacation next year because they not only have a lovely museum - a converted old schoolhouse - but there is a wonderful little garden area behind that was past it's peak blooming season but lovely nonetheless.
If you are visiting Long Beach Island I would recommend these stops during your stay there. There is a concrete walkway along the jetty by the light and you can walk from there to the beach right past the bird sanctuary. The fishermen love this area and it is a great photo opportunity. 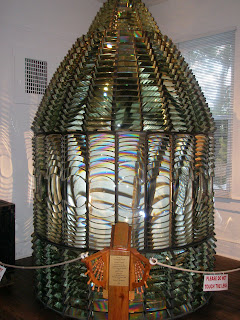 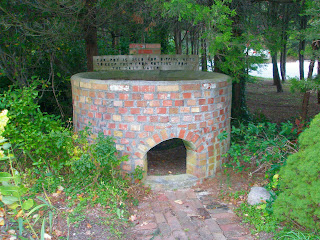