You know what's always good to bring to a Picnic?  COOKIES!  An easy, handheld dessert.  And aren't we at the right time of year to start thinking about COOKIES for the holidays.  I spend way too much time online looking at all kinds of things, but I've also picked up some good recipes along the way whether from blogs, Pinterest, Facebook, or websites.  I've even tried some of them.

When I saw a picture of these Molasses cookies on Facebook I knew that's what I wanted to draw for this week's theme.  I also knew that I wanted to give them a try because they were described as being soft, moist and chewy - three things I look for in a molasses cookie.  So I added the ingredients I did not have to the shopping list for HWNSNBP to pick up. 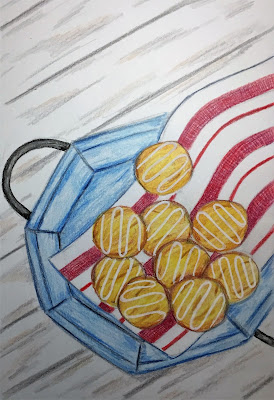 I should have paid more attention to the recipe than I did because I did not realize that it called for 5 cups of flour.  Oh goodness I thought as I started measuring out things.  This is going to make a ton of cookies.  By the time I had followed the directions and added everything together the batter was right up to the top of the biggest mixing bowl that I have.  I was far past the point of realizing that I should have used the stand mixer as the beaters on my hand mixer were completely submerged up to the mixer itself.  And to top it all off, the butter, which I thought was softened enough apparently wasn't and there were little lumps of butter throughout.

The oven was warming so I put the bowl on top of the stacked cookie sheets on the stovetop hoping that the butter blobs would melt a little more without cooking the batter in the bowl.  Well, that worked but then the batter was so warm it was too runny to "roll into balls" as the recipe stated.  So I put it all in the refrigerator to cool off and harden up a little.  An hour later, it was cool enough but the batter was way too sticky and soft to roll into balls so I spooned it out onto the parchment paper-covered cookie sheets and baked them.

Now, if I showed you what the recipe photo looked like, you would see that those cookies were definitely rolled in sugar and were crispy on the outside but crackled with moist insides showing.  Mine were not!  They looked like sandwich cookies you would see made into whoopie pies.  Which makes me think that the recipe did not go with that picture.

They tasted okay, were soft, but not moist and chewy. They were cakey which is not at all what I was craving.  So after the first two dozen were baked I put the batter back in the fridge and when the cookies were cool, I bagged them up to take to work today.  (You know if you leave food in the faculty room it will disappear like magic!)  The consensus was that they would make good molasses whoopie pies with some cream cheese filling so you know what I'll be doing with that leftover batter this weekend.

If you want that recipe you can click here.  But I'd rather share my recipe for Ginger Spice Cookies which I am going to make tomorrow.

Mix flour, sugar, salt, soda and spices in a large mixing bowl.  Cut in shortening.  Stir in molasses and egg.  Chill the dough for a little in the fridge.

Shape into 1 inch balls, roll in sugar.  Place on ungreased baking sheet. Bake at 350º for 10 minutes. Do not over bake or they'll be hard and crisp instead of soft and chewy.  Let cookies cool on rack.

Now I'm really craving these cookies, but I want to see what COOKIES all the other Picnickers have brought.  Click here to join me.
Posted by Lorraine at 9:33 PM

Email ThisBlogThis!Share to TwitterShare to FacebookShare to Pinterest
Filed Under: Recipes, Scribble Picnic