I was making a card recently that had a bunch of tiny die cuts that I wanted arranged in a certain way.  So I did what I normally do and laid them out on the front of the card until I liked the way they were arranged.  In the past, I've taken a quick picture with my phone to use as a guide for when I'm ready to glue, but this time I remembered a trick I had seen someone use that involved Press and Seal.

This is the layout that I was aiming for. 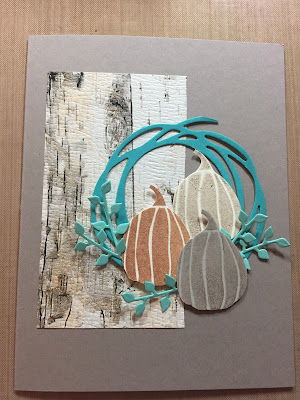 Once I had the pieces where I wanted them I took a piece of Press and Seal and covered the whole face of the card, rubbing it slightly to make sure all those die cuts would stick. 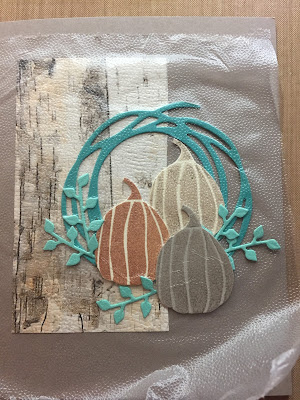 Then I carefully pealed the Press and Seal away from the card and turned it over to reveal the back side of all those die cuts that hadn't moved.  At this point, I added glue to those pieces.  (I use Tombow liquid glue in the bottle.) 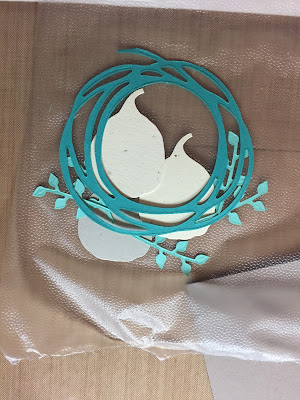 I was able to turn the sheet back over and place it back onto the card front.  I burnished the area where the dies were to get them glued down and then carefully removed the Press and Seal.  (Note:  the darkest pumpkin was not glued down because I wanted it to stand out a bit so I added a dimensional to it and added it at the end.) 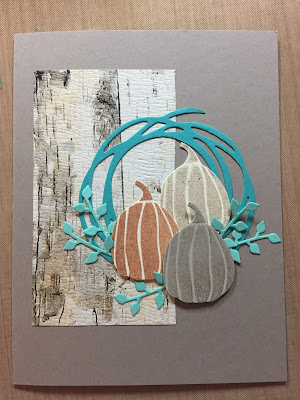 This took a lot less time than following the picture and gluing down each element separately and I achieved the layout I was aiming for.  The only thing I would change would be not gluing down the ends of the foliage, but I still like the way this turned out.   And, the Press and Seal is reusable as long as you don't get glue on it.  I was so happy I remembered to try it that I just had to share.
Posted by Lorraine at 2:30 PM

Email ThisBlogThis!Share to TwitterShare to FacebookShare to Pinterest
Filed Under: Tips and Tricks