I figured I'd better shorten up these posts from two weeks to one.  So here goes with Week 5 -

July 29 - California.  I've been to California once with HWNSNBP back in the mid-90's.  He had won an award from work and that's where the ceremony was to be held.  We stayed at the Ritz Carlton in Laguna Niguel which overlooks the Pacific.  One of my most vivid memories was the hillside down to the beach - how it was covered with pink and yellow flowers and it was only April.  We were so high up the surfers looked like seals in the water.  Here is my attempt at that hillside in watercolors. 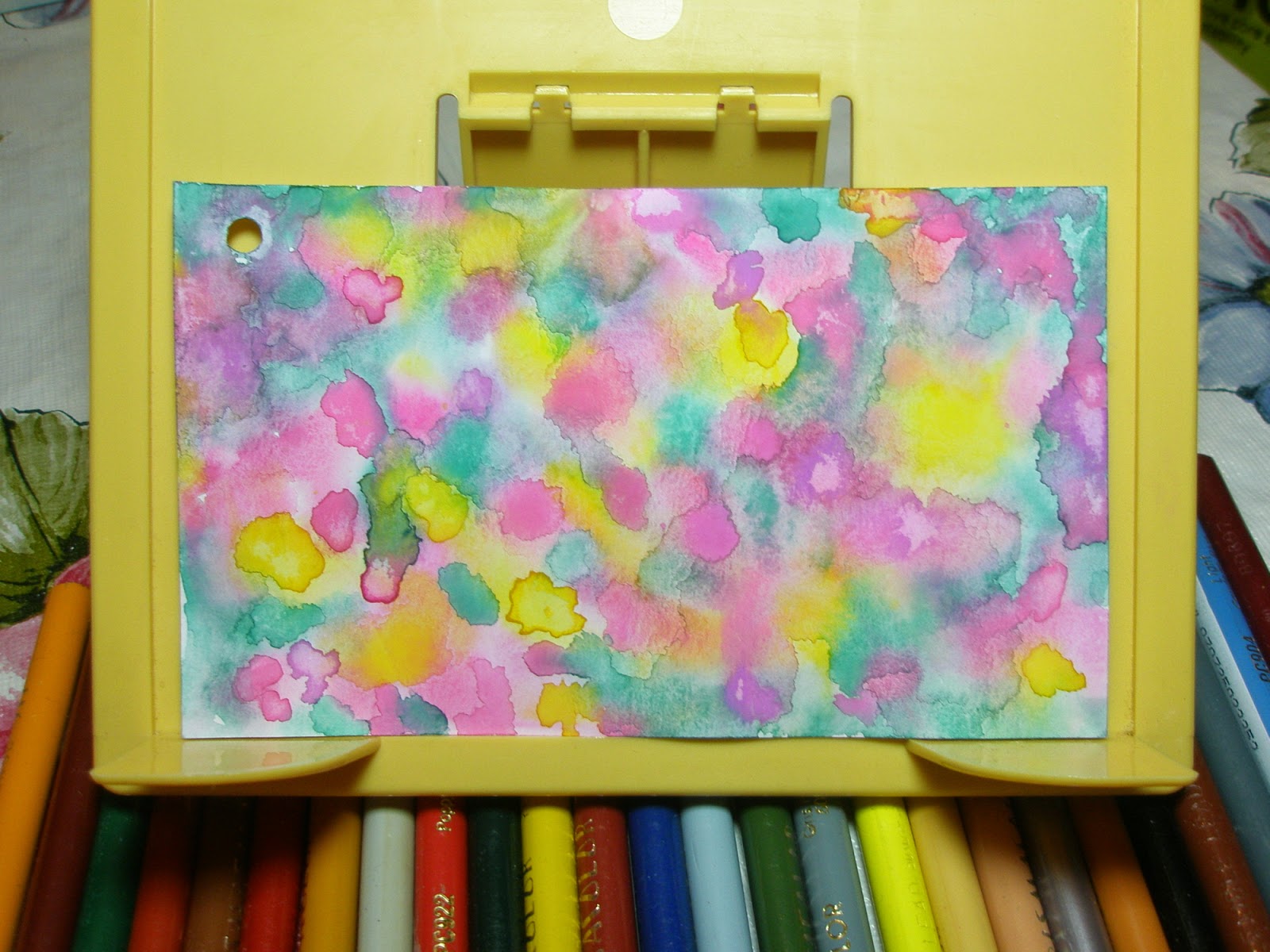 July 30 - Red.  I just received my Stampin' Up Blendabilities and gave the red set a tryout. 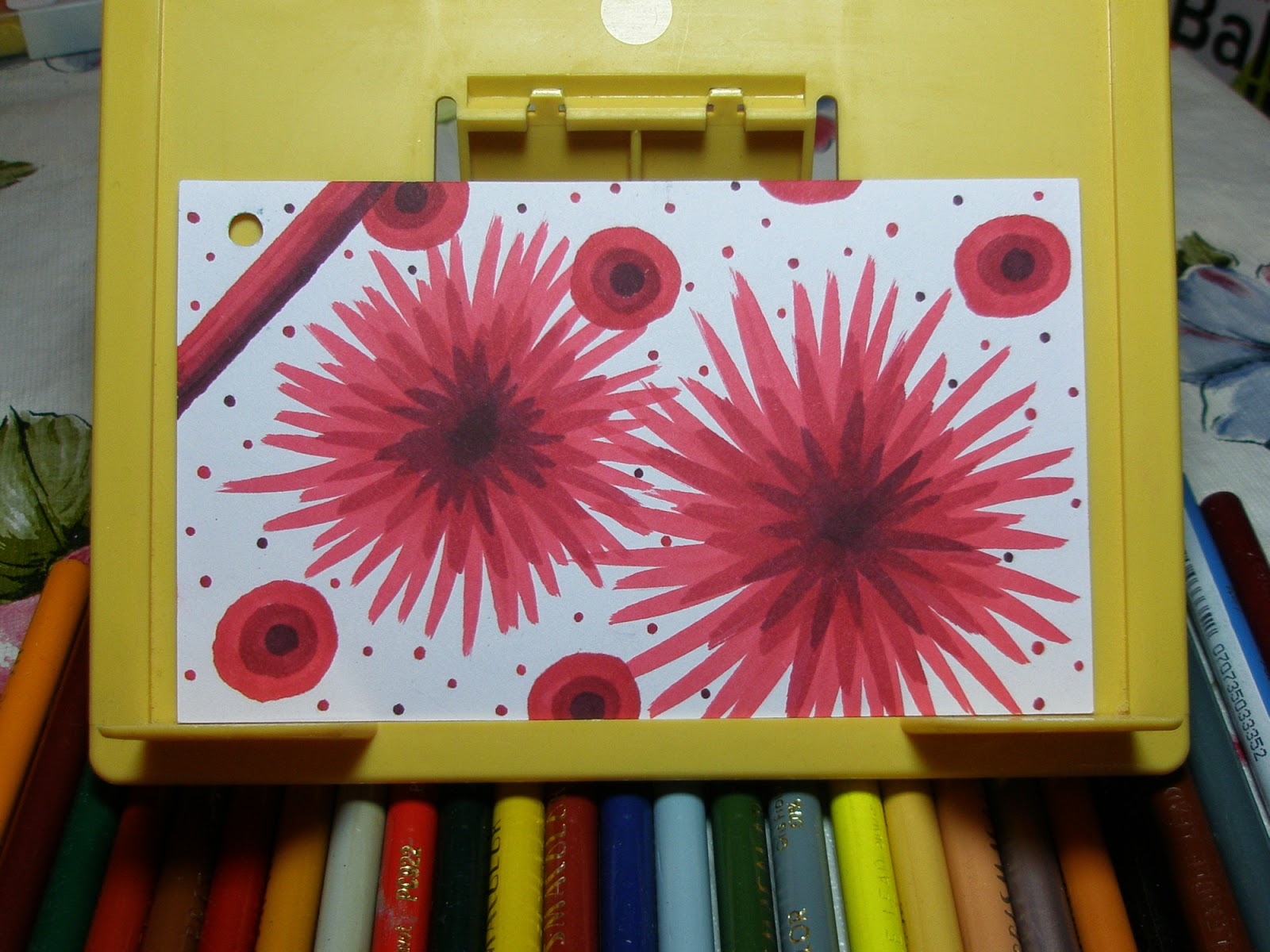 July 1 - Flower Bouquet.  While not necessarily a bouquet, it is a bunch of watercolored flowers more realistic this time. 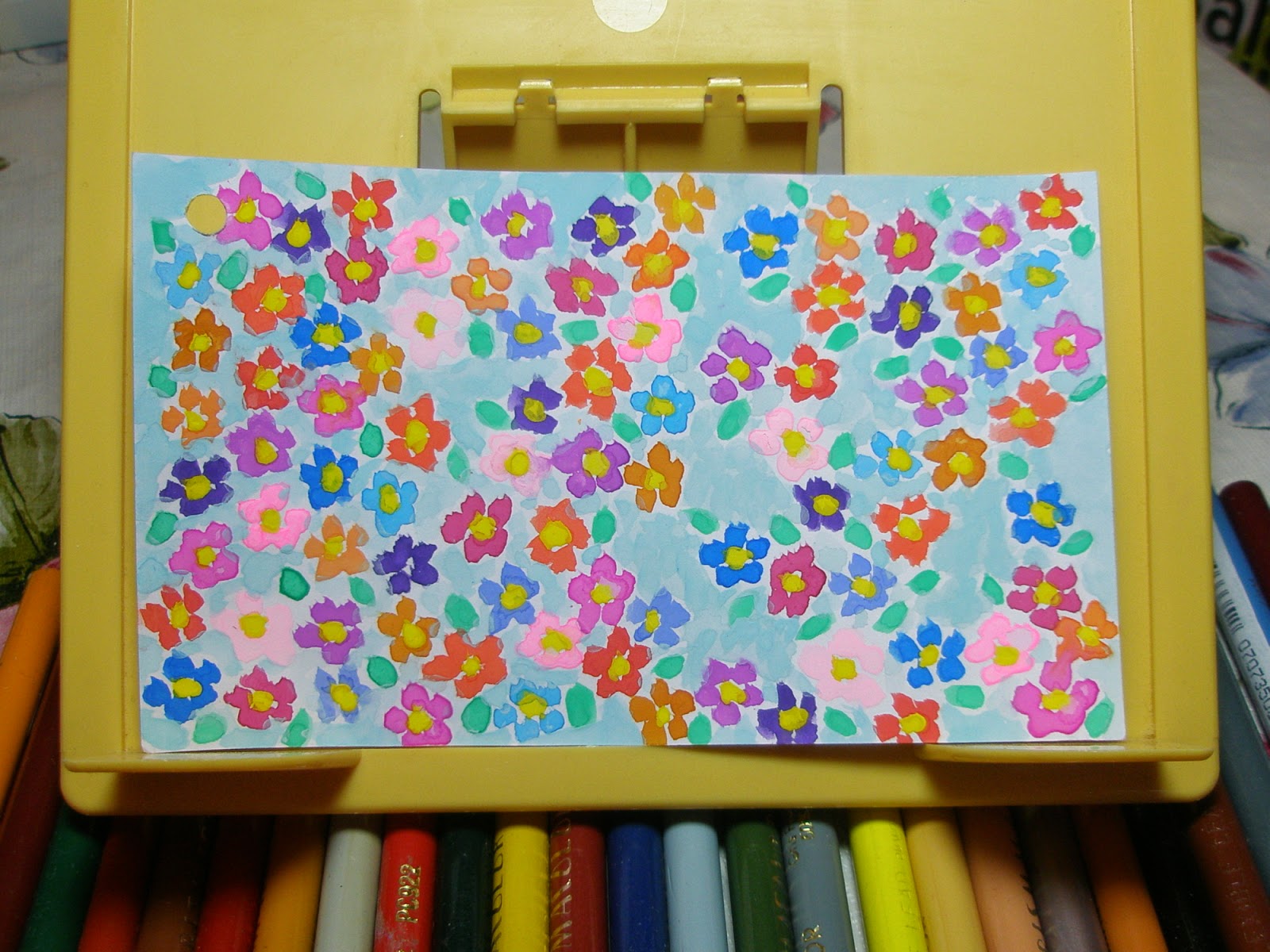 July 2 - Tea or Coffee.  I have been saving tea bag papers lately.  Why you may ask?  I'm thinking of a project I wanted to try inspired by Kim Henkel at Letting in the Light.  I used tea bag paper here.  I first stamped the floral image on it with Stazon ink and let it dry.  Then I laid the tea bag over the index card and watercolored it.  The watercolors flowed through the tea bag easily onto the index card.  I'll save that card for another time.  This time I took the painted tea bag paper and mod podged it to a blank index card and the painting looked even better.  The butterflies were punch leftovers that I glued on before the final coat of mod podge. 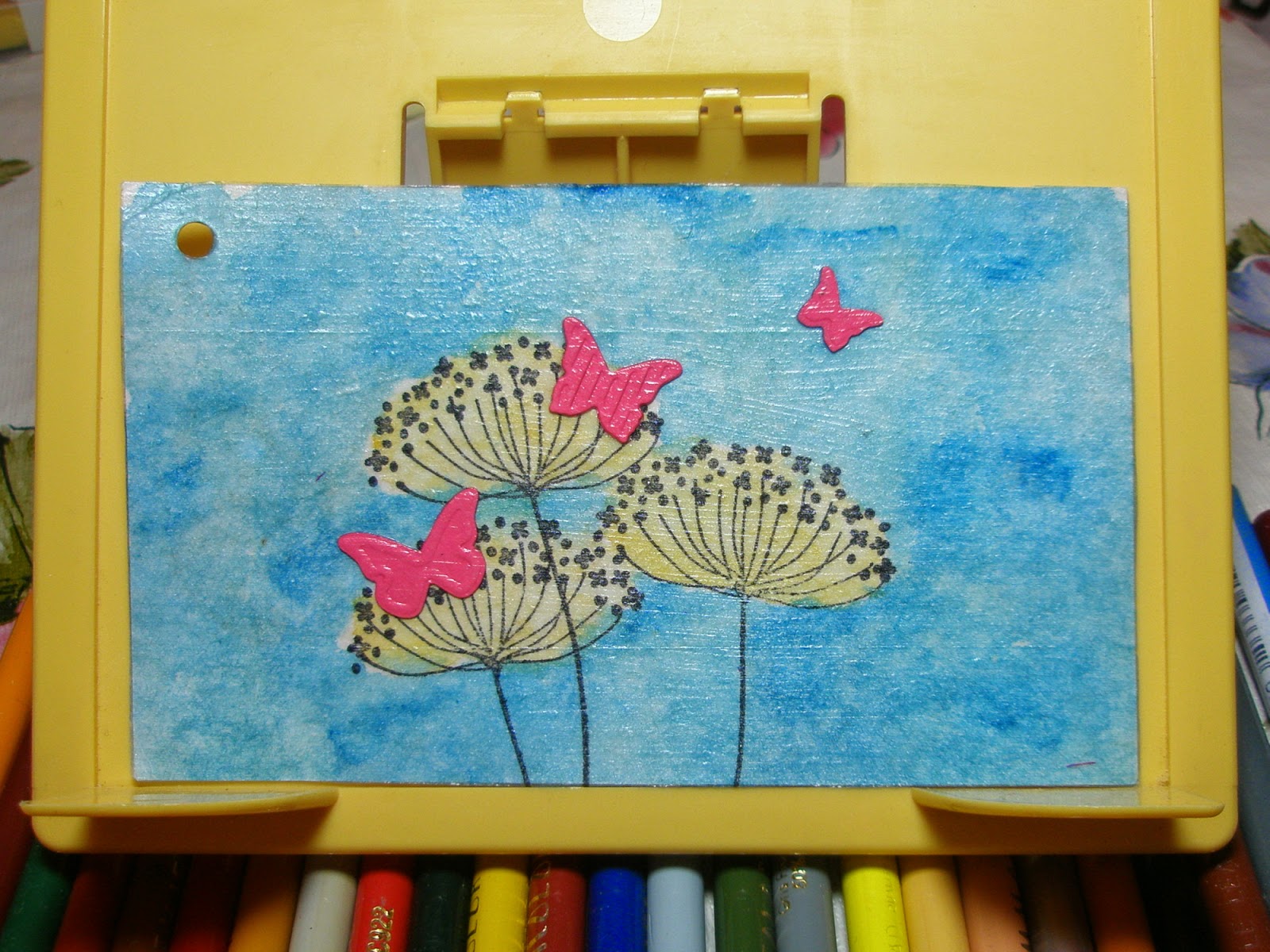 July 3 - Tomorrowland.  I know this was supposed to be a reference to the Tomorrowland in Disney World but instead, as we had Hurricane Arthur approaching tomorrow I cased myself from a tangle I had done when we were awaiting the landfall of Sandy and added the Jersey coastline with the storm spinning away from us. 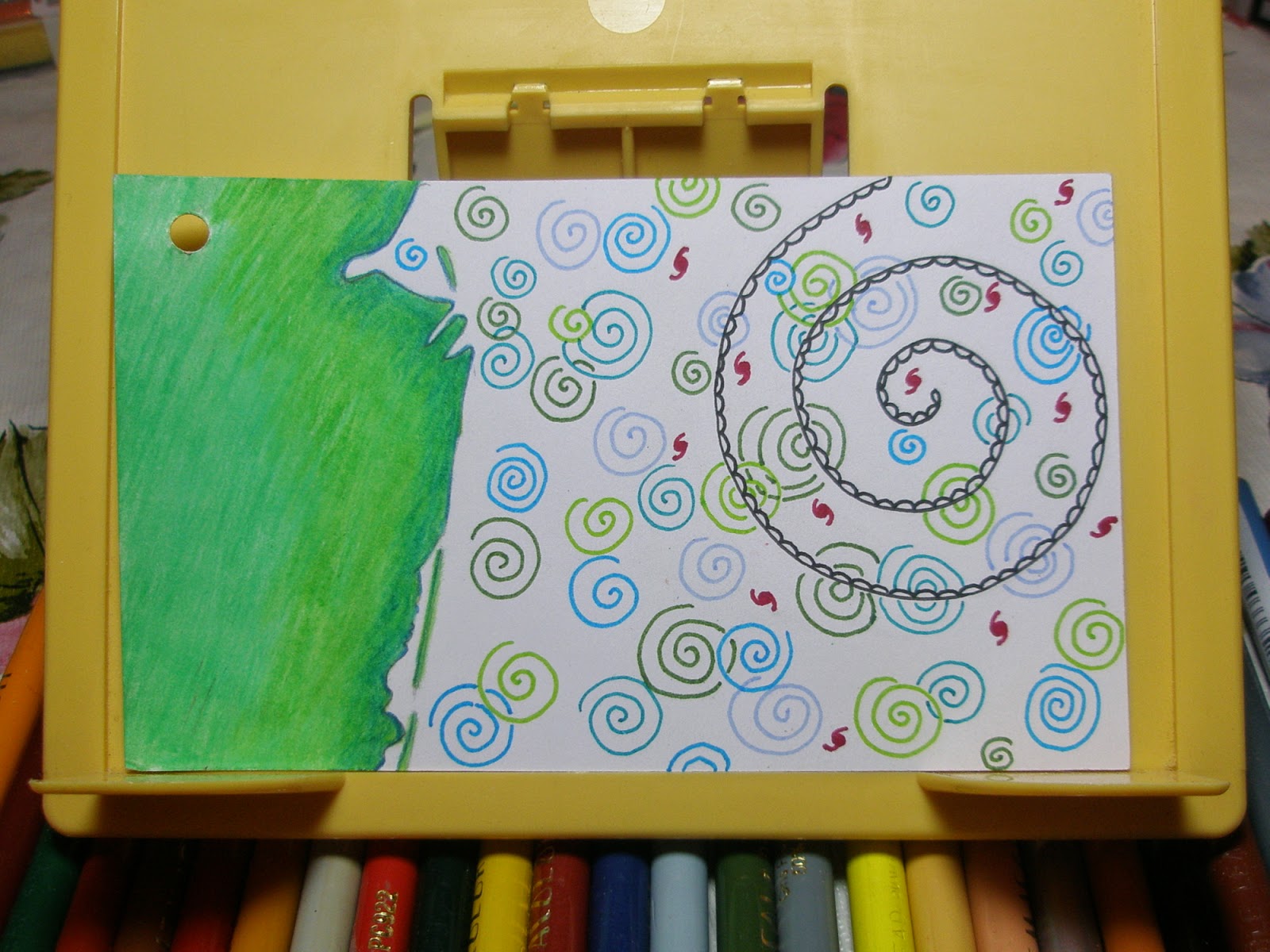 July 4 - Flag.  There's an ice cream place we stop at sometimes on our way to or from Barnegat and the cones come wrapped in these flag wrappers, which of course, as you can see, I save.  The mosaic pieces I added were from the label on a Cool Whip Container. 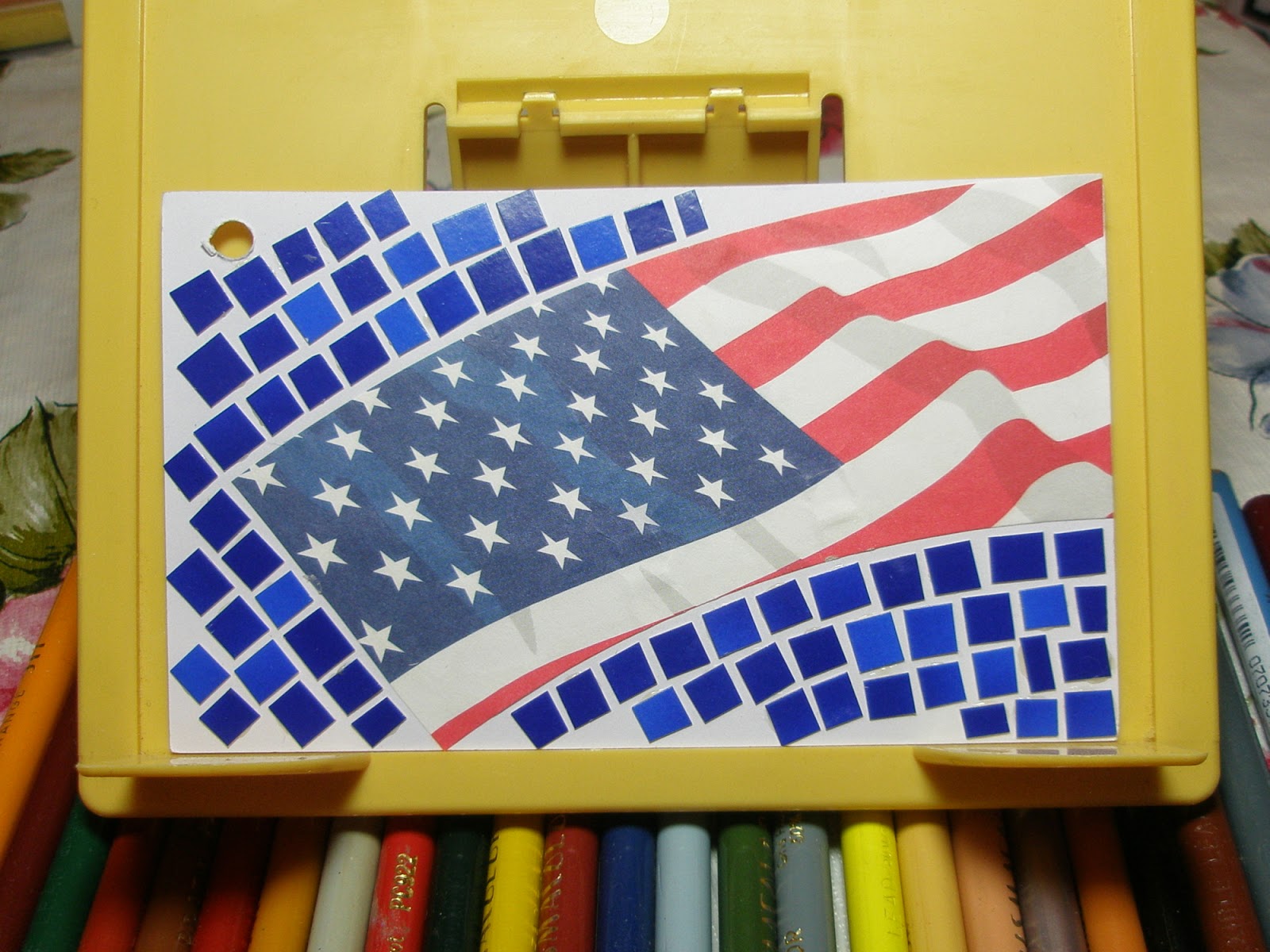 July 5 - Postage Stamp.  I love this series of bird stamps and received a card with the painted bunting on it which you know I couldn't throw away.  I used my Prismacolor pencils to first draw the cancellation markings and then to add the colors that you see in the bird between the lines.  Then with my Micron pen I filled in all the white space with parallel lines, adding the stamp at the end. 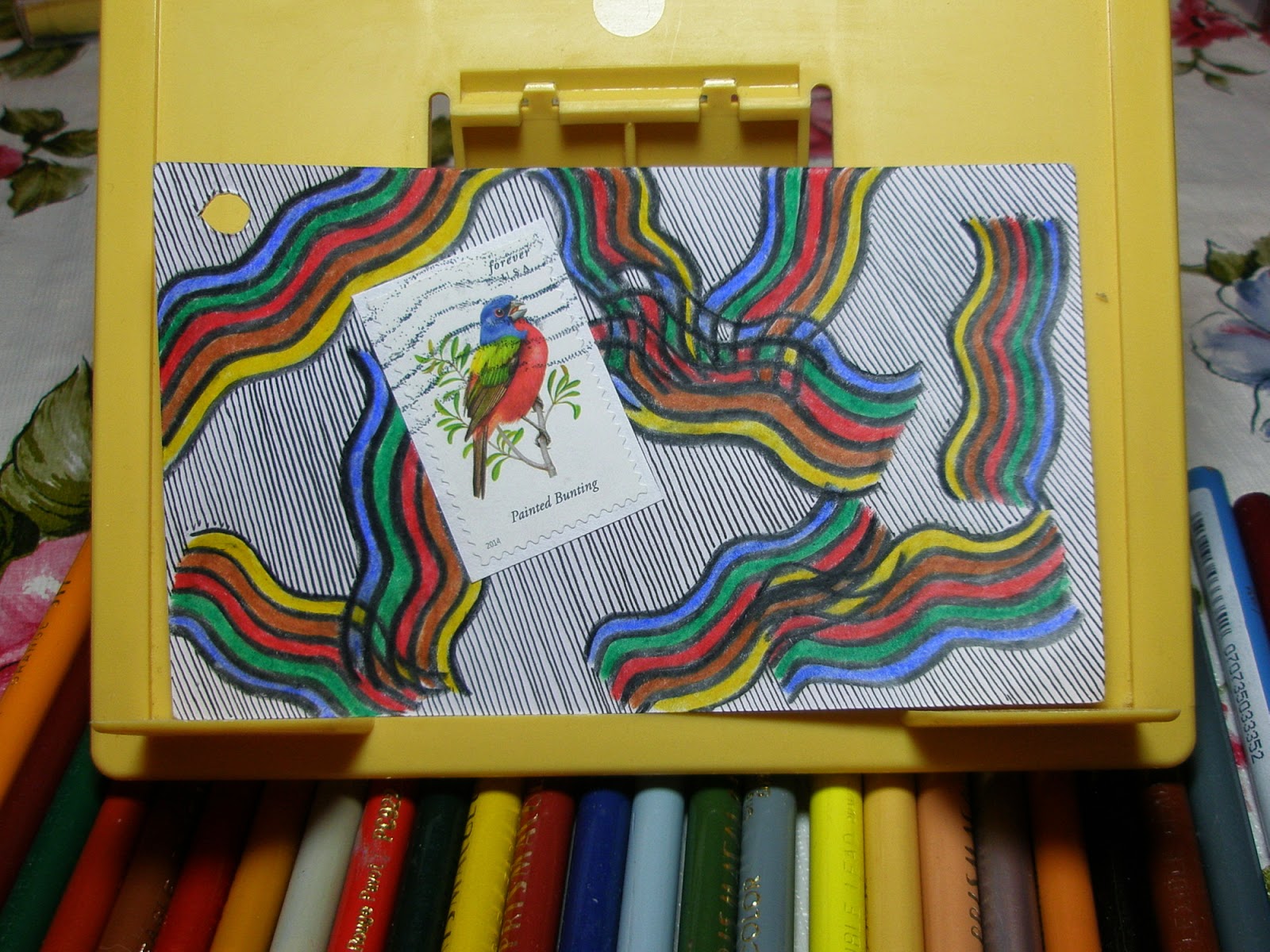 I know that some of my cards seem a bit "elementary" but I'm trying to use different approaches and different media and leaving my comfort zone.  I already know that there are a number of them that I'd like to do over, or add to, but I want this to be a spontaneous exercise and not something that I'll have to perseverate over.  And so far, it has been fun too.

Email ThisBlogThis!Share to TwitterShare to FacebookShare to Pinterest
Filed Under: ICAD 2014