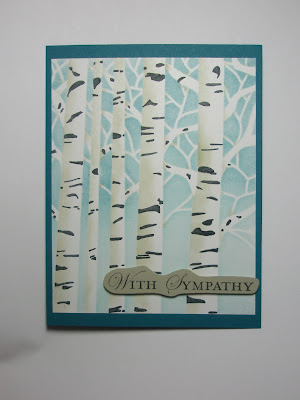 These trees are actually created with a stencil by TCW called Aspen Trees.  I used some post-it notes to hold the stencil in place on some white cs and then did some sponging of the sky starting with Baja Breeze on the lower portion and then Island Indigo from the top and gradually blending into the Baja.  Then, while the stencil was still held in place, I used my Basic Gray marker to fill in the cracks in the bark.  Admittedly, the ink got under the stencil in some cases but that was fixed just by using the fine end to clean up the ragged lines.

I reused those post-its as masks on the left of the trees so I could dauber on some Sahara Sand to give the trees dimension.  There is some shading on the branches in Sahara Sand also which was accomplished with a small spongy make-up applicator.  Next time I am going to try colored pencils for the shading as they might be a lot easier in those very small areas.

The sentiment comes from Loving Thoughts and I stamped it in Basic Gray on Sahara Sand cardstock.  I didn't want too much empty space surrounding the sentiment so I used the shape of the stamp itself as the "die" for it.  I just traced around it lightly in pencil and cut it out with scissors.  The sentiment is popped up with dimensionals.

My sister's Godfather passed away earlier this week and we were not able to go to the services because we've both been fighting off something and there's so much flu we're hearing about, we thought it better not to risk it for ourselves or giving something to others.  Knock on wood, the "flu" hasn't seemed to hit the school yet, but there are a number of nasty viruses going around including one that just presents with headache and dizziness.  I believe I got that one.  It's been a chore to try to stay focused on things.

We're trying to keep hydrated and doing a lot of handwashing and hopefully the flu will pass us by.
Posted by Lorraine at 4:32 PM

Email ThisBlogThis!Share to TwitterShare to FacebookShare to Pinterest
Filed Under: Sympathy Cards