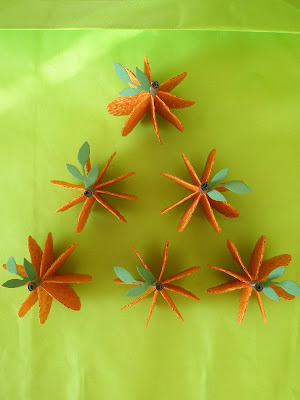 You might think these look like some funny asterisks from the top.  But focused in the right direction you can see what they are (although I do apologize for the crummy photos - lights and photo tent were not available at the time). 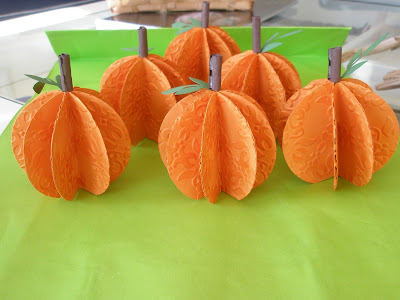 I had seen these little pumpkins on Pink Buckaroo Designs and thought that they would be perfect for Halloween and/or Thanksgiving as I was putting together some little goody bags which I thought I would be able to disperse on Halloween.  Of course we know that Mother Nature nixed that and they became Thanksgiving bags.

If you clicked on the link to the blog I referenced you will see that she used hers for placecards and they are a bit different.  I simplified mine in that I used my 2 3/4" punch to punch out 8 circles for each pumpkin, my little leaf sizzlet and a strip of brown cs for the stem.  I ran the circles through the Big Shot using the wallpaper embossing folder and then daubered them to highlight the embossing.   I didn't score my circles, I gently folded them in half and lightly pinched the fold because I find the embossing leaves the cs a little fragile.  The circles were glued together with Tombow Multi which is quick adhering and made that process go pretty quickly. 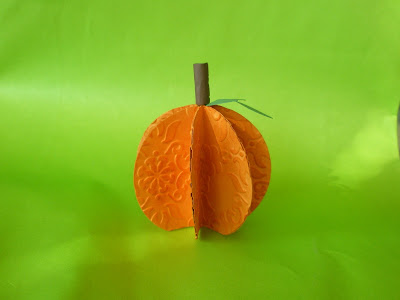 I rolled the brown strip around a toothpick that I had snapped in half and used red line tape to secure that.  I put a glob of glue on the exposed end of the toothpick and slid that and the leaves into the center of the glued circles.  They look pretty simple compared to the placecard holders that inspired me but I think they are still pretty cute.

When I am doing multiples of things I like to work in an assembly line manner doing each step to each piece before I move to the next.  I feel that this makes the process go faster although that could all be in my head because I've never really taken the time to actually time it.

How do you do projects with multiples?  Do you do them one at a time or assembly line?

I'll be posting pictures of the finished bags soon.  I handed them out yesterday when our school had it's "low key" Halloween celebration.  Trick or Treating had been cancelled in NJ on Halloween and postponed to Nov. 5, but our town was still having issues with downed wires and dangerous broken trees and limbs so they cancelled it all together here.   Our school decided that the children could have their parties and get dressed for them since the homeroom parents had spent money on classroom craft projects and whatnot for the parties that were supposed to be held on Halloween.  It was a screwy day with all the traffic in the office - parents dropping off party treats and costumes and various other forgotten things.  But the kids were happy and the homeroom parents were happy that now they could "put Halloween away" and get on with the next holiday.