Aha, a centennial teaparty!!!  But this is destined to be a relaxing one.  You'll have to read Cindy's story here.  This is our inspiration this week............ 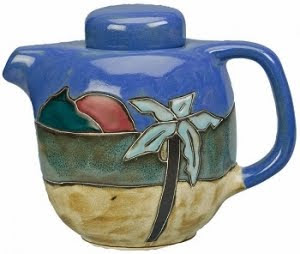 And this is Felix "Fishhook" Johnson.  Felix spends his free time fishing on Teapot Island all by himself.  You see Felix needs to get away by himself because he's always being made fun of by his friends.  It's the hat.  His mother makes him wear that silly hat all the time.   At one point he thought that it would seem cooler if he added a Skull and Crossbones to the hat - he could be a pirate.  But his mom didn't like that idea.  No.  No son of hers was going to be a pirate.  But, he could be a fisherman. 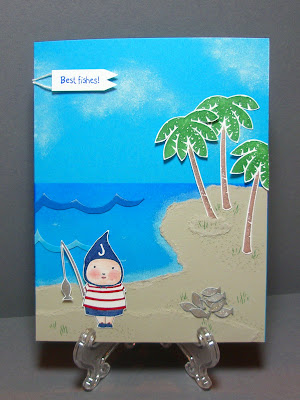 So instead of the Skull and Crossbones she added a fishhook to his hat. 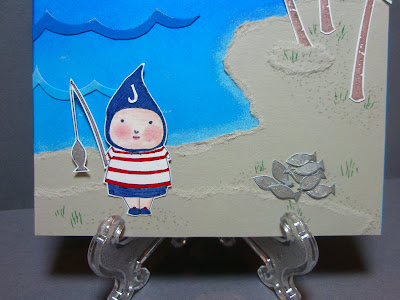 His buddies didn't get it.  They thought it was just the letter "J" for his last name so they just avoided him.    What nut in a pointy hat needs their initial on it?
So everyday now Felix takes his fishing pole and heads on out to the beach.  He's just been very lucky as you can see.  He has a pile of fish there!  Some sparkly fish for dinner tonight.  Maybe his mom will get tired of cooking fish and let him be a pirate.  Maybe then he could find some sparkly pirate treasure and he could buy teapot island and make all the boys wear silly hats!
This card will be going to a teapotter who has recently had some serious surgery.  I hope that it makes her smile!
The little fisherman is from Poppystamps (so are the fish, I just stamped them by themselves and painted them first with silver shimmer paint and then gave them a coat of sparkly gold).  The palm trees are from Tropical Party and the sentiment is from Very Punny (ret.).
I masked the horizon on my Tempting Turquoise background and sponged some Brilliant Blue and Turquoise ink in the water area.  I had some paper waves left over from a previous card and added them in.  White Craft ink was sponged around the shoreline and a little in the water, oh, and also the clouds in the sky.  The sand is torn Sahara Sand cardstock.  The sentiment is meant to look like it's on one of those plane banners that fly along the shoreline all summer.
Okay, go and check the gallery now!!!
Posted by Lorraine at 2:07 PM