If you've visited Polka Dot Pineapple you will see that 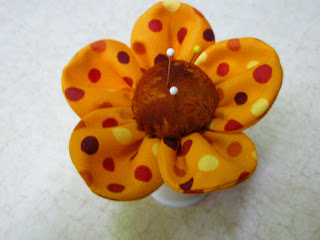 Arlette has a wonderful tutorial for this pincushion. I have been admiring the one that she posted and finally decided to give it a go as it is a very good tutorial.

This Sunday, I convinced HWNSNBP to take a ride to the Christmas Tree Shop to buy some sheets they had on sale. Although I did manage to spend some $, I was feeling a little dizzy so we didn't stay as long as we normally do (it is about a 50 min. ride and I am usually in the store for more than an hour, but I think I set a record for the fastest visit!). Anyway, you're probably saying "what has this got to do with the pincushion?" Be patient, I'll get there.

On the way to the Christmas Tree Shop we go through a little town that has a quilt store that I've always wanted to stop at - the Pennington Quilt Works. I had told HWNSNBP on the way down that I would like to stop at the shop if it was opened on the way back. I think he thought that since I was dozing in the car, that he was probably homefree, but I could tell when we left the main (straight) highway and were nearing the store. He didn't put up a stink - bonus points for that** - but he did leave the car running while I went inside to "browse" around. I have to say that my dizziness was a little enhanced by all the patterns and colors that were everywhere in this shop so I too wanted to make it a short trip.

Now, let me say that I have a considerable stash of fabric here at home. It's one of those things that are so pretty and easy to accumulate if you don't use them right away - much like scrapbook paper. But I kind of knew that I wanted to try the pincushion and I had a color palette in mind. I have to say that this is the least amount of money that I have probably ever spent in a fabric store!!! 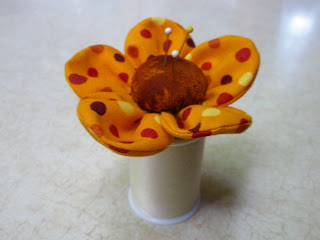 The project calls for a golf tee and though HWNSNBP is not a golfer, I had a bag of them for some other planned craft project which I have forgotten by now. I searched and found the tees and got started on my new pincushion. Don't you think it's cute!!!

BTW, I managed to get my 30-yr-old-Kenmore-sewing machine-that-I-have-been-told-cannot-be-fixed working so I didn't have to sew the petals by hand. But I have to say that I was pretty pissed off that the people in the shop I took it to changed the stitch settings and the tension was all
screwed up. If you're a sewer, you'll know that screwed up tension is not fun.

So, in closing, I wanted to say thanks Lettie for a fantastic tutorial, a cute project, and providing me with a little diversionary creativity.
Posted by Lorraine at 12:28 AM

Email ThisBlogThis!Share to TwitterShare to FacebookShare to Pinterest
Filed Under: General Crafts