On the last day or so from Christmas break, the Christmas Elf usually shows up at school.  This year the elf came on Friday even though we had a half day of school on Monday.  The elf just didn't want to take the chance of there being a snow day or getting sick or something on that order.

So, for the secretaries the workshop first appeared to look like this........... 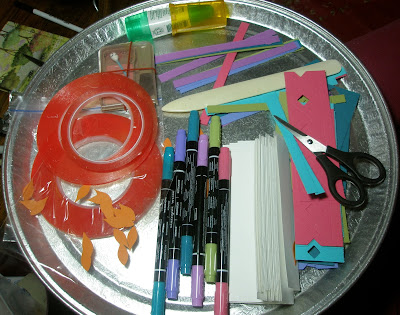 Looks pretty colorful doesn't it?  What was to become of all that? 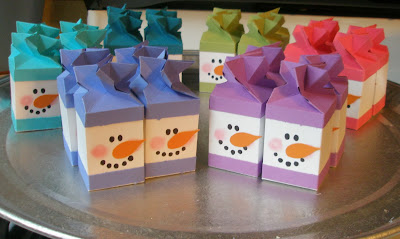 Snowmen in hats and scarves. 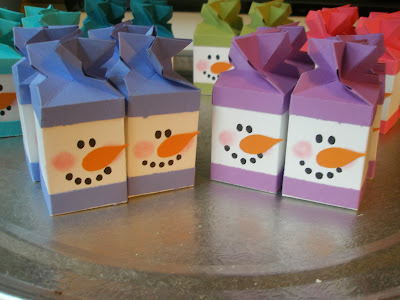 And tucked inside..... a little bit of candy. 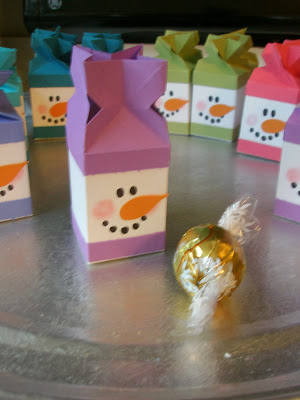 Thanks to Laura Haffke's post found here, I simplified her snowman by using paper for the scarf and drawing the eyes.  I also used my petal punch to create those "carrot" noses, just trimming one end of the petal to be a little more rounded.  I also added real blush for the cheeks.  Inside each one was a Lindor Truffle - one of the white varieties.  These little guys were delivered via our interoffice mail to all the secretaries and clerks in the district.

I, er, um, the elf also toyed with the idea of making these for the staff at our school, but the elf never seems to leave herself much time to do these things so another plan was hatched.

What can you do for 70 people at a very little expense?  Not that the elf is cheap, mind you.  She's just not rich, so she's always on the lookout for something cute, clever, and inexpensive.  And in this case, practical.

The elf had her helper pick up two cases of water from Costco because there were 35 bottles in each case for $4.99.  And this is what she created to put on them..........

A little work with Print Shop and a paper cutter and tape and into the staff mailboxes they went.  She toyed with the idea of putting lemonade in one of them, but decided against it not wanting to single anybody out.  (Note:  I only added my name to the picture in case this gets pinned anywhere.)

It was much easier to sneak back into the school office after everyone left and put these labels on while there than taking them out of their shrink wrap and bagging them at home, er, in the workshop.

It's fun to see the reactions of the staff as they find their little "gift" in their mailbox.  Most of them assume it's from me, but I'll only admit to it being the work of the Christmas Elf.

Email ThisBlogThis!Share to TwitterShare to FacebookShare to Pinterest
Filed Under: 3D Projects, holidays