We have a couple of friends with anniversaries this month.  My cousin and her husband celebrated their 35th.  I took my inspiration for their card from the element(s) assigned to the 35th anniversary - coral and/or jade. 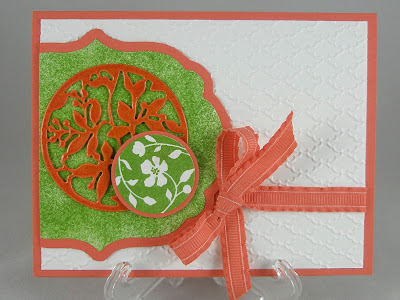 Calypso Coral and Gumball Green were my color choices.  The cutwork piece that you see is actually an earring that I found earlier this summer at a flea market.  It was a hideous neon orange so I first smushed it into my VersaMark pad and then into the Calypso Coral pad to make it the coral color that I wanted.  I wound up doing this twice.

I was trying to get the background green piece to look like jade by sponging the green ink onto the die cut shape.  I did the same with the round stamped image.  I added a Calypso Coral bow. 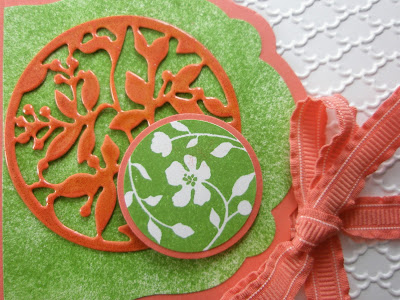 Our other friends had their 34th anniversary, which doesn't have any traditional elements that I could find so I went another way with this one.  The silhouette image that you see has 4 birds on the stamp but I only wanted the two birds who seemed to be speaking with one another so I inked the image with my marker carefully avoiding the other two birds.  After I stamped it, I went back with the pointed tip of the marker to add in the branches that those missing birds would have covered. 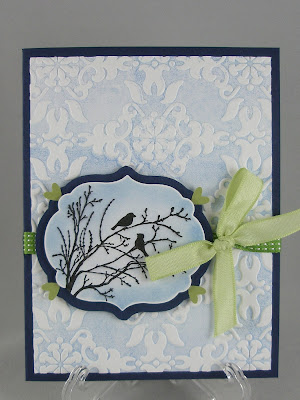 I brayered Bashful Blue ink onto the embossing folder before I embossed it so that the ink would be in the recesses of the embossing.  And, when I die cut the image I left it in the die and then used a dauber to add the blue shading so you see the think white frame around the edge.  The navy layer  was not die cut (nor was the Calypso Coral one in the card above).  I turned the die over and traced around it to get my frame.  This die is not that intricate and it didn't take that long. 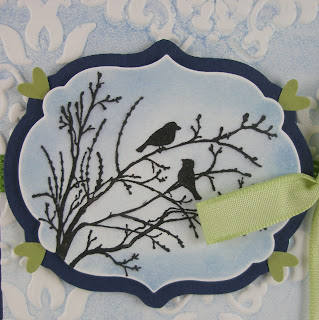 I had to add the green to this card because that was one of their wedding colors.   The little hearts were a last minute decision that I was pleased with.

I'm headed out on some errands today as I have the day off.  My cousin told me that they opened a Hobby Lobby not too far away.  We don't, or didn't have Hobby Lobby in NJ.  At least not close by that I know of, and I'm anxious to see what it's all about!

Email ThisBlogThis!Share to TwitterShare to FacebookShare to Pinterest
Filed Under: Anniversary Cards