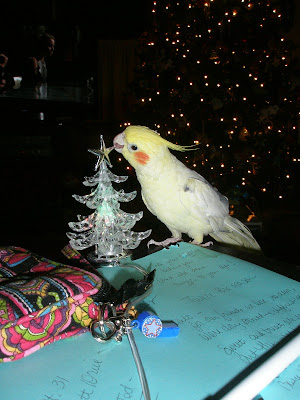 This is Kirby hanging out on the writing portion of my computer stand.  Although he might look like he's adding the star to that tree, he's actually nibbling at it as he did the paper you will see near his feet.  When he went after the cord with his beak he was returned to his cage home.  That little tree is hooked up via USB port to my laptop and it changes color.  It was a cute little find that I found out about from my hairdresser.  She mentioned that CVS had these little trees you could just plug into your computer and later that day I sent HWNSNBP to find one at the local CVS.
Unfortunately, they either never had them or were all sold out because he said that the "kids" behind the counter did not know what he was talking about making me, of course, a bit of a dope for sending him there.  However, I called the next nearest store - a bigger store - and they did have them and agreed to hold two for me until the next day.  So off went HWNSNBP the next morning on his round of errands for the day (self-imposed most of them!) and he picked one up for me and the other I gave to my office mate.   Luckily I had asked them to put them on hold for me because they were the last two by the time he got there.
So we both had these trees hooked up to our computers in the school office the last week before Christmas and several people that saw them also wanted them, but no local stores had any more.  It was funny how a simple passing comment by my hairdresser turned this into the hot item of the day!  Scouting around other CVS stores in the area we were able to find some snowmen and a couple of other trees which became gifts for my daughter and her roommate and a couple of friends.
And speaking of fun gifts, here are a couple of fun scarves that I made out of some colorful t-shirts that belonged to my father.   I made two of each and Rachel got one of the more "earth toned" ones and I kept a red/green one for myself.  The other two became presents.  They are strictly fun items as they provide very little warmth, but they were fun and easy to make.  If you check this link you can find the directions. 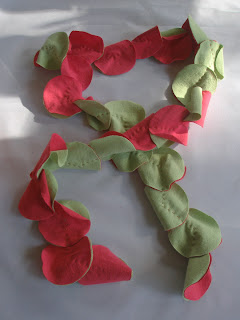 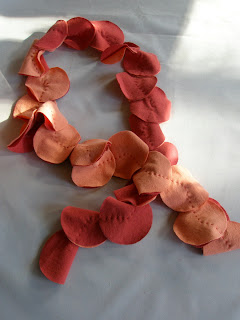 And speaking of Rachel, while she was here there was the usual vie for control of the TV between her and her dad.  He wanted to watch "The Sound of Music" on Christmas night and won out - if only during airtime - commercial time became time to surf and she happened upon the one scene in "The Music Man" that always makes us laugh......