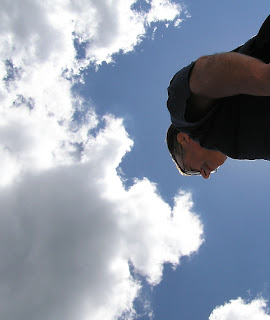 Blue Monday.  We biked this morning and walked this afternoon.  Out to the point at the lighthouse.  It was too nice a day not to at least try although my hip was screaming and there were many stops on the way.  Lucky for me that I could periodically sit on the rocks and collect myself before trudging on. Once we made it to the ocean I put down the towel and took in some sun while HWNSNBP walked the beach.  This is my view of him from the towel - so you see it is not facing the wrong direction.
Below are puddle jumpers we saw on our bike ride. 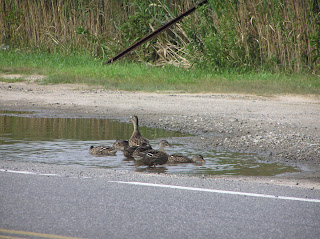 And the cormorants have returned to the pier - along with gulls. 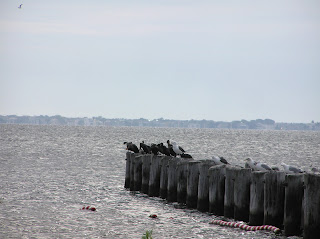 HWNSNBP's picture of the lighthouse today.  (Not a bad job dear!) 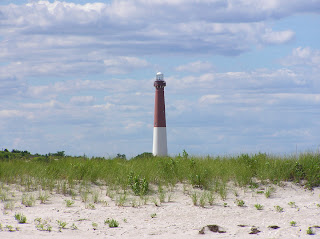 And the bird on the beach he was following.  Could it be a plover or a sandpiper? 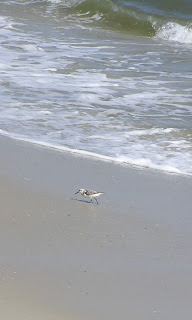 This gull dove into the water and fetched out a blowfish.  He started on the rocks with it and then brought it down to the sand.  He stood there trying to pop it and wasn't having much luck.  Rest assured, we told him/her that we really weren't interested in stealing it from him. 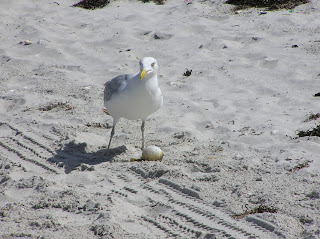 On the way back we noticed this collection of broken sunglasses on the rocks.  Makes me wonder if they had been brought there or found there? 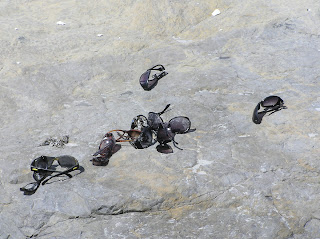 HWNSNBP scavenged a partial seahorse from the debris line.  It is missing it's face unfortunately.  I don't ever recall finding a seahorse on a beach in NJ ever.  There's always something new out there. 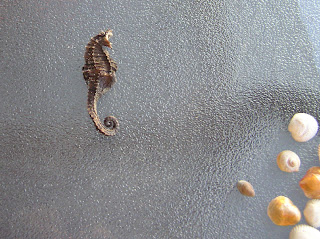 Email ThisBlogThis!Share to TwitterShare to FacebookShare to Pinterest
Filed Under: Ramblings in Photos

I always love to see your beach photos - it's too long since I lived near the sea. Blowfishes, seahorses - way more exotic stuff than we have. The cache of sunglasses is a curiosity.

What a nice shot of the Barnegat lighthouse! I don't think I ever saw a seahorse at the DE shore, either...but we used to catch lots of blowfish and I haven't seen one of them in years! Thanks for the beautiful photos!

Lovely photos of the beach. Since we live in the mountains, I never see the beach and all it's magic.
Hugs, Jeanne

the weather looks like there will be a lot of fun to enjoy there. Mine is up and its here thanks Points of View and Thoughts

Lorraine
Welcome. My name is Lorraine Mastalski and I'm a lifelong crafter married 44 years to the love of my life who tolerates my obsession with craft supplies and the creative mess we're constantly in the state of. I worked in a busy school office and recently retired. I still de-stress in my craft room to keep my sanity. We are the proud parents of a son and daughter who have wonderful spouses and have given us two energetic grandsons to love. I hope you enjoy your visit here.