Last Tuesday the 177th Fighter Wing did a flyover New Jersey to honor the healthcare and essential workers in our state.  They published their fly route a few days before and it looked like they would be flying over Barnegat so I took a vacation day (I really did use a vacation day as we've been told to make sure we use them before the end of June) and we drove down there to be able to walk over to the dock and wait and see.  We weren't disappointed that they did fly over us, but some of the people who were also there seemed a little disappointed that there were only the four planes.  It was good to get out, but I have to note that we spent more time in the car that day than at the condo. 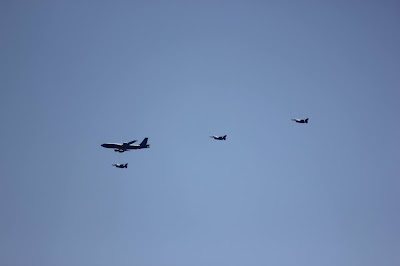 We were treated to a couple visitors in the back outside.  I noticed two white things in the tall grass but from our first floor - which is actually one story up since the building is raised above the parking area - I couldn't really make out what those white things were.  Either they were some sort of rubbish that got stuck in the weeds or something else.  So I grabbed the camera and went upstairs to see what it was from a higher vantage point.  I was thrilled to see two black-capped night-herons through the phragmites. 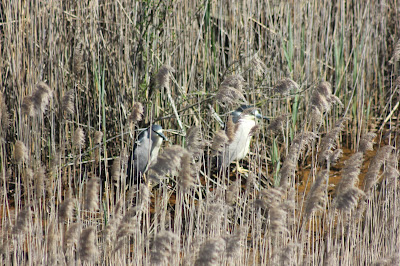 They look much smaller in these pictures than they are in real life.  There is a ditch that they're facing so I'm thinking there must be some food source there - maybe something hatching this time of the year.  They don't typically nest on the ground so I think they were just resting there. 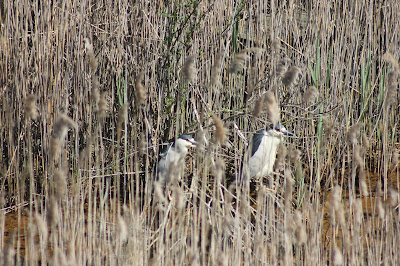 We went back down to the condo on the weekend.  Some of the beaches in NJ have been open for fishing, walking, and jogging - no sunbathing yet.  HWNSNBP wanted to try some surf fishing - which he did without any success.  But it was good for a change of scenery.  Here is the sunset from Friday night - still a spring sky. 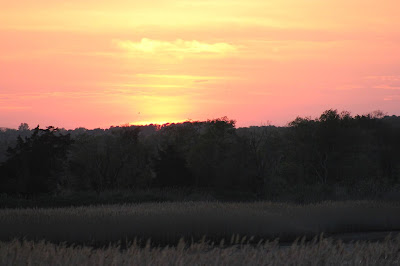 And Friday happened to be National Chocolate Chip Cookie Day and I just happened to have some frozen chocolate chip cookie dough balls in the freezer that I brought along to have for dessert.  I used a new recipe found here.  It called for apple cider vinegar and claimed to be soft and chewy.  They tasted good but mine did not come out chewy.  Perhaps baked too long? 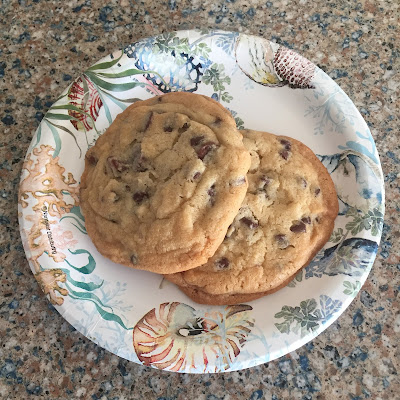