A Couple of School Projects

The trees in front of my school put on quite a show in the fall.  It's like a rainbow of colors.  The yellow, orange, red and purple trees.  The evergreen shrubs and of course the blue ski on a clear day. All the colors in the rainbow. 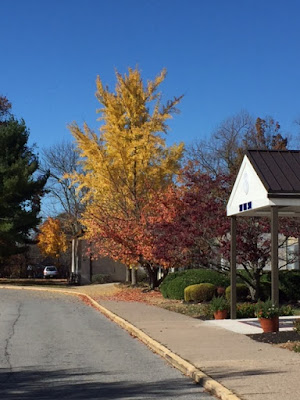 HWNSNBP and I had our hands in a couple of projects around the school this fall.  He built this bench from some plans I found on the internet (in fact he's built 3 already), and I whipped up this ghost made from a tomato cage, some bubble wrap, a couple of white pillow cases, and sunglasses. We snuck over to the school under cover of darkness on Halloween morning and placed this little vignette just outside the office window (just to the left of the entryway pictured above) so the kids would see it when they arrived at school. 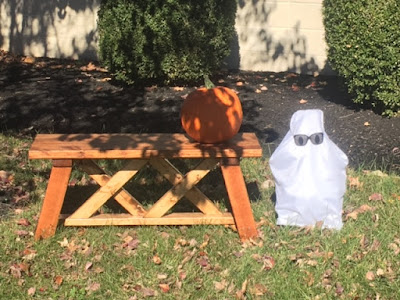 Around the back was another project.  We have these raised beds for planting that a boy scout working on his community service project put in several years ago.  Over the past few years they have gone unused.  I mentioned to the GATE teacher earlier in the school year that we should do something with them, like have a scarecrow building contests between the grades.  She thought that sounded pretty cool and along with our new guidance counselor they turned it into a project based on the lessons they were having during Red Ribbon Week.  The theme for Red Ribbon Week was YOLO - you only live once - and they talked about how you need to make healthy choices and stay away from drugs to make something out of your life.  The classes were challenged to make a scarecrow in the form of something they could aspire to be if they made the right choices.

Each homeroom was provided with a scarecrow form/cross that I volunteered HWNSNBP to put together.  You should have seen the faces when I carried the prototype into school.  It looked like a wooden crucifix.  Our PTO gave each glass some of their "party" money to put towards the components of the scarecrows.  The classes brainstormed their ideas and they then brought in the clothing that they were going to use.  On Halloween, the homeroom moms helped the kids assemble their scarecrows as part of their party time.

The next day they were taken outside and displayed in the raised beds.
(One of the things below is not like the others.) 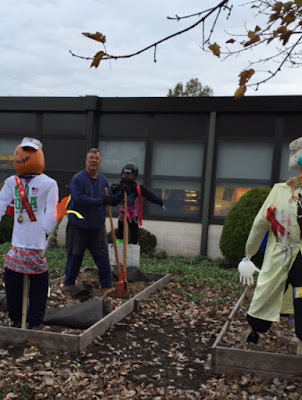 Again I volunteered HWNSNBP to dig the holes.  It turned out to be a little more complicated than just digging a hole.  He dug the holes and in each hole he buried a length of pvc pipe that the scarecrow stake just barely fit into so that they would be very stable.  On the day that we went over to the school to do that part it began raining and we tried to get it all done, but we were soaking wet and he could no longer hold onto the post hole digger, so we had to go back the next night to finish the last two holes.

Below you can see how they all looked.  Creepy and cool at the same time I think.  And on the fence to the left, those pieces of paper were the write-ups that the classes did explaining what walk of life their scarecrow was from and how they came up with that.  The district administrators, our office staff, and the township officials were asked to vote on the best from grade 4 and the best from grade 5.  The winning scarecrows are going to be moved to the Municipal Building and displayed for the rest of the month. 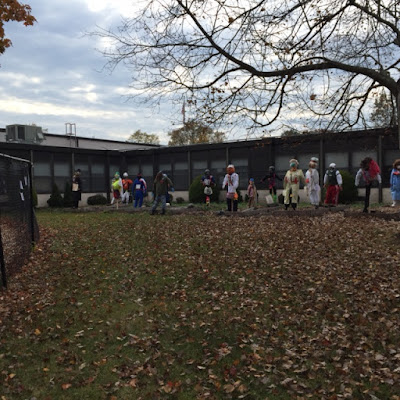 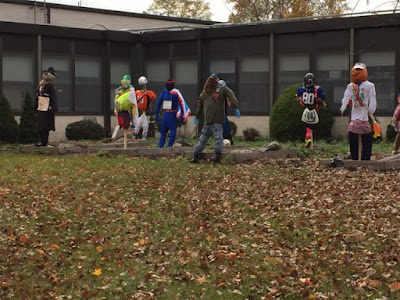 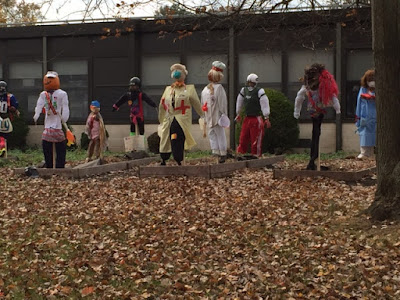 The GATE teacher and our guidance counselor had the leadership council students make thank you notes for HWNSNBP.  He was quite tickled to read them all.