Before an Almost Hurricane

Her name was Hermine and she was supposed to be a fish storm by the time she got to us up here in New Jersey after taking her time threading between the Florida Keys and Cuba and into the Gulf of Mexico, slowly gathering her wits and bits to swing back east across Florida and then out into the Atlantic again.

But then, as the holiday weekend approached (Labor Day weekend) the prognosticators started changing their tune.  No longer would that be the "perfect weekend", the unofficial end of summer three-day-weekend that most of us look forward to before heading back to school.  Oh no.  Those of us on the mid-Atlantic coast were forewarned of the coming of a storm of near epic proportions.  Not quite a Sandy (as we now use Superstorm Sandy of 2012 as a barometer of storms), but the conditions were prime for major coastal flooding.

So we, of course, headed to the coast to secure the condo against the wind.  We're up 14 feet so flooding is not a fear for damage to our home, but we have furniture on the screened in back porch that could be blown about by the wind.  And flooding would affect our car and ability to leave when the water gets high.

But as the actual landfall that weekend was uncertain, on Saturday morning we decided to take a ride out to the lighthouse to see if we could walk out to the ocean.

We could feel the wind building as we left the condo that morning to start our little adventure.  Luckily I threw a long-sleeved shirt with a hood in our bag before we left, because windy it was!

It was fairly early in the morning and the parking lot was kind of empty when we got there.  It didn't take us long to realize why after we walked out to the lighthouse.  The wind was pretty fierce and the water was already hitting the side of the walkway and coming over the rocks that line the inlet.  So at this point normal 60+-year-old's would probably and rationally call it a morning.  But who ever said that we were normal.  (But this is really just about as adventurous as we get and it really wasn't that bad.)   There would be no climbing down from the walkway onto the sand, we had to go back to lighthouse and enter the sand area from there.  The water was pooled along the inside of the rocks quite a bit so we really didn't know how far we would get. 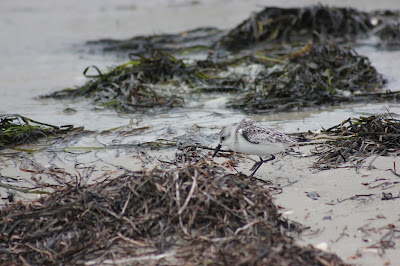 Looking back you can see the lighthouse against the gray sky.  I had to periodically turn backwards when the wind was whipping the sand at me stinging my bare legs and the water spraying in my face. 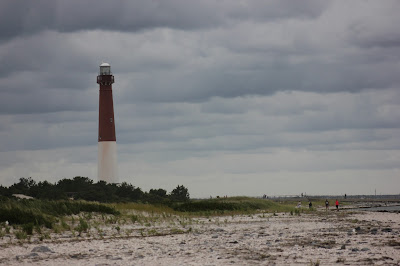 Here at the end you can see how rough the waves were as they hit the rocks and the navigation tower at the end of the jetty.  These guys were fishing but we had no idea what they were intending to catch in that rough water. 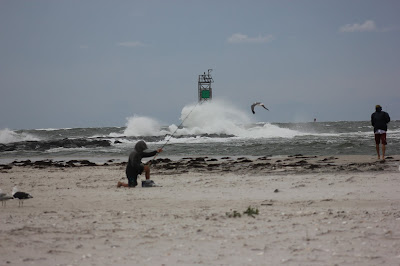 HWNSNBP was taking pictures of the swells.  He carried out our bag with a towel in it because I usually sit down for a spell once we reach the ocean, however, there would be no sitting that day. 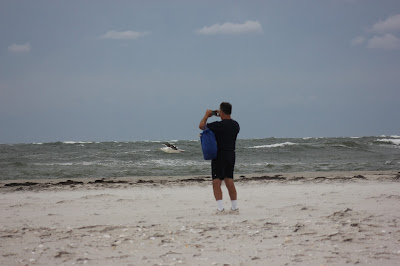 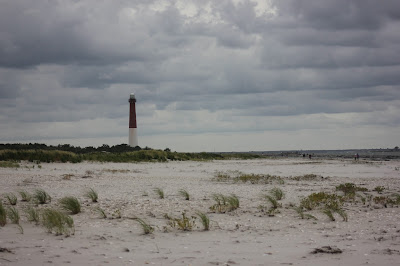 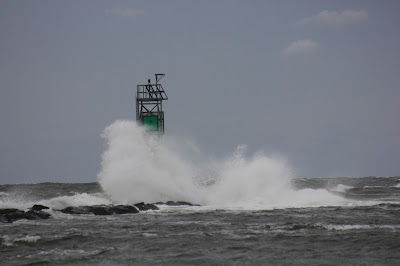 These gulls just stood there with their beaks into the wind. 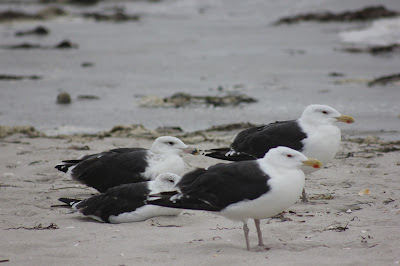 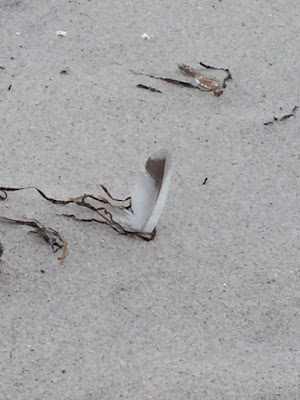 This guy was in the same place coming and going. 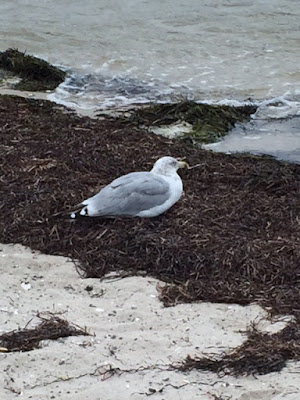 There was a flock of what I believe were tree swallows that were murmurating through the dunes and found this little water hole.  There were hundreds of them diving down to the water and then up.  It was fascinating to watch.

When we got back to the car HWNSNBP walked over to the Inlet Deli for breakfast sandwiches for us but it was way too windy to sit at the picnic table to eat them.  Instead we sat in the car.  This colorful family of 7 came bicycling up to check out the inlet while we were there. 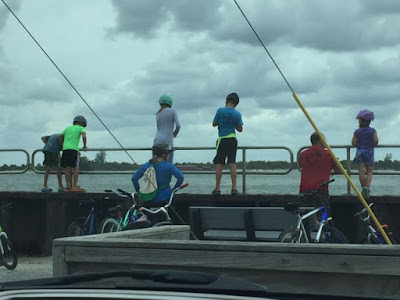 We packed up when we got back to the condo and headed back inland and the storm, well, it didn't turn out to be anything much.  Some tidal flooding on Sunday, but not to the epic proportions it could have been.  Instead we had some beautiful days at home.

Email ThisBlogThis!Share to TwitterShare to FacebookShare to Pinterest
Filed Under: Ramblings, Ramblings in Photos