It's been a while since I've done a Teapot Tuesday Challenge.  Life does get in the way of my fun - bah!  This looked to be an interesting challenge and you can read all about here.  Cindy is such a super writer.  And she always find such great inspiration for us.  This reminds me of a lamp that my cousin bought.  But for this challenge think camouflage, pink, and hearts. 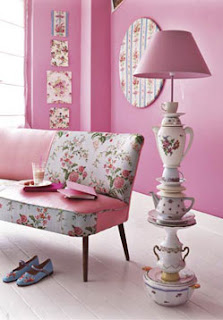 I've got camouflage, pink and hearts!  Lucky for us it's Valentine's season.  I didn't have to dig anything out cause I was using most of this stuff on other Valentine projects. 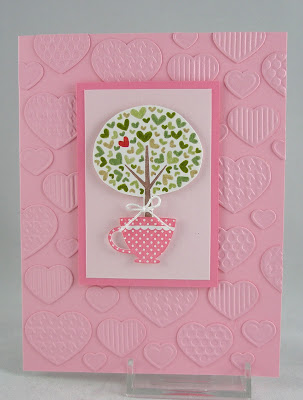 The base is Pretty In Pink with lots of Pretty in Pink hearts I got from the Fashionable Hearts embosslit.  The little teacup is from a new set called Tea Shoppe and the tree comes from Valentine Defined.  The background looks hard but it wasn't really hard, just a little time-consuming.  What was hard was coloring the tree.  I used several different shades of green markers and the stamp had to be held just at the right angle so I could tell which little heart had been inked already.  For some reason (I think it was because I didn't do such a great job cleaning this stamp the last time I used it) I kept getting green hearts with pink outlines.  Not the effect I was going for, so I tried three times before I got one that I could live with.
The finishing touch was adding the little white cotton thread bow.
Okay, over to the gallery now to check things out.  Click here to join me.
Posted by Lorraine at 11:26 PM