I've spent the better part of the last four days sorting and purging.  When we emptied out the room I was using as my craft space we put everything into the other spare bedroom (the room that used to be our daughter's).  Of course when the major work in the craft room was done all the stuff had to be moved back in.  Problem was and continues to be that I have too much stuff.  And I've tried explaining to my husband that I just didn't want to grab the stuff and just put it anywhere in the new space.  If I were to organize things now would be the time.

Why am I starting with this... well because I promised to come back with another card for this challenge, but I said I would be using a new stamp.  Instead, I used some things that I had that I had forgotten about. The chevron panel was in a pack of papers long forgotten.  The ribbon with the poinsettias was in the scrap ribbon bag.  The wooden piece on the bottom was among some others that I found tucked in a box.  Don't tell anyone but this one was broken in the middle and I glued it back together and then used some tea stain ink to stain the wood.  Covering it with one of those poinsettia stickers and you'd never know it was repaired.  Lastly the deer and wreath were cut from a wood sheet that I found during the purging process.  It worked well with the dies. 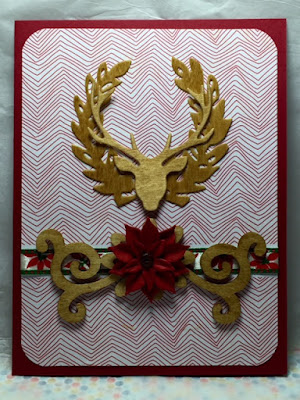 It's stained with the same tea stain ink that I used on the other piece but in the picture it might appear to be gold.  I used one dimensional on the head of the deer and let the antlers go "free" as the wood was naturally curving and it gave it much more dimension. 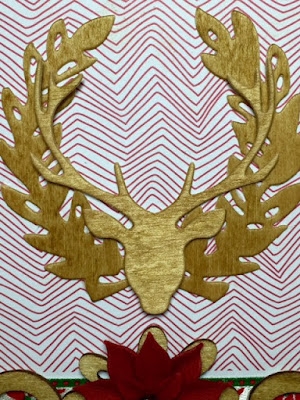 So on the spur of the moment, as I was cleaning out that other room, I told HWNSNBP that we really should paint it while we were doing such a deep clean and he went along with it.  This meant a trip to Home Depot for paint.  Being so spur of the moment I really had no idea what color I was looking for.  And I should add that color choices are never quick with me.  The room is currently painted two colors (my daughter's teenage choice) - light green and lavendar, which sound okay and look okay for a teenage room, but since we no longer have a teenager I wanted something more subtle.  I tend to go for the blues, so while HWNSNBP was looking for something else at HD I went to the paint section to take a look.  I picked out a color and he grabbed the sample from me and went over to the counter to ask for a sample.  I handed him another card with samples of the finishes that the paint can come in and pointed to the one that I wanted.  He promptly told the clerk we wanted the matte finish only he did not pronounce it matte as in mat, but rather mattay as in latte, whereby I swatted him with the card and corrected him which the guys behind the counter thought was pretty funny and jokingly warned me that they had seen me "beating up" my husband.  And no, he was not joking around with that pronunciation.  We've been through this before, just not in the store.  We got our sample and headed home never checking the color swatch on the top of the jar they put there for you to know what's inside.  Only later, when we had been home for a while did I notice that the color swatch on the top of the jar was a mustard yellow, very definitely not blue.  Being colorblind, HWNSNBP never even noticed when he put the sample on the walls.  Nothing is ever easy is it!

But speaking of blue...........little blue eyes and his mom came to visit for a spell on Saturday.  I could just drown in those pools of blue. 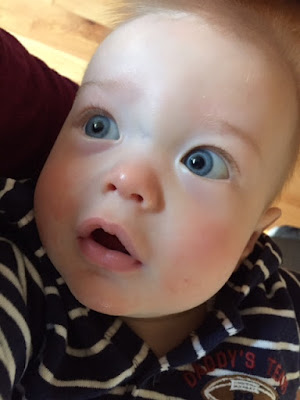 So let me finish this up and encourage you to visit the Jingle Belles to see all the other lovely floral Christmas cards.  And maybe, just maybe, since my haircut appointment for tomorrow was cancelled, I might get to using that new stamp I promised I'd try.  Here's the link to the Jingle Belles.