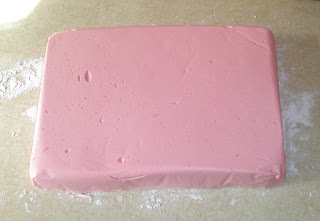 These two-bite-size cinnamon flavored marshmallows.  Aren't they pretty in pink?  The cinnamon flavor comes from adding ground red hots candies and it's very mild, but just enough of a hint of cinnamon. 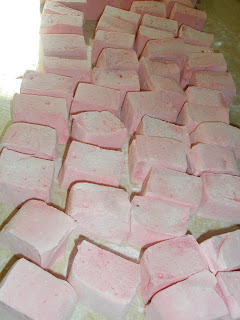 After they are cut, they are tossed in a mixture of confectioner's sugar and rice flour to keep them from sticking together.
I also made a batch of plain vanilla ones.  Both varieties were packaged up together. 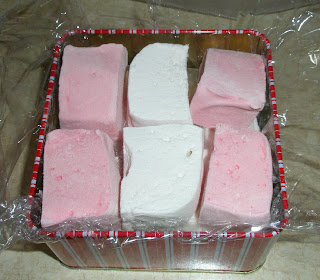 Found these boxes on 70% clearance in the dollar section of Target after Christmas.  What a bargain!!! 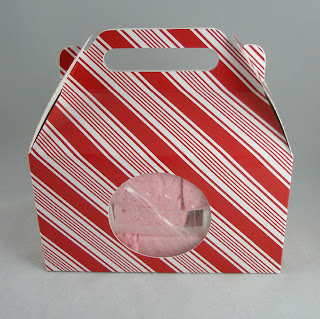 I always keep a look out for clearance items that can be used for other events.  Red and white will do not just for Christmas but Valentine's as well.  (Green things I put aside for St. Patrick's Day.)  I just added a Memory Box floral wreath die cut that I cut from watercolor paper and colored with my SU markers to make these look a little less like a candy cane.  (If it were me getting this box I would be gently prying that wreath off and making an ornament out of it as it reminds me of the delicate, but sturdy papercut ornaments I've seen at this little Scandinavian shop in Cape May.) 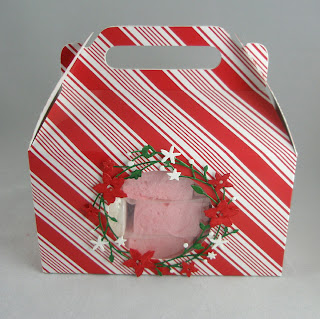 These tins were also in the clearance section.  Another bargain for sure. 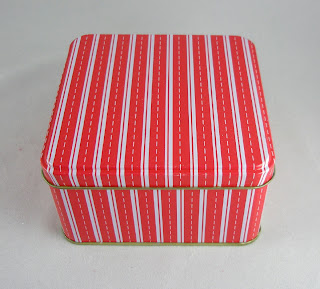 I made a belly band out of Regal Rose cs and kept adding punched pieces to pretty it up. 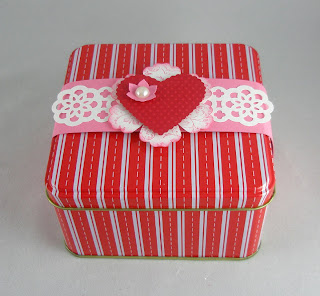 The big floral punch was stamped and sponged and I added a big sticky pearl to that pink flower. 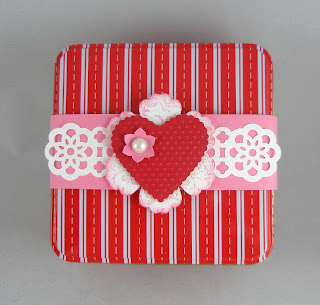 The large boxes above were delivered to my oncologist's office and my physical therapy center.  Some of the smaller ones have not yet been delivered but they will be soon!
Posted by Lorraine at 12:11 AM

Email ThisBlogThis!Share to TwitterShare to FacebookShare to Pinterest
Filed Under: 3D Projects, holidays