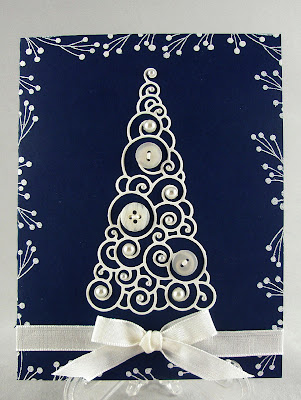 So, did you guess from the title what was up with this challenge?  Buttons!  I love buttons.  Unfortunately, I tend to hoard them.  I have jars and tins full.  My love for buttons goes back to my childhood.  My grandmother "Stella", who lived downstairs from us, worked in a sewing factory and she had cookie tins full of buttons that we used to play with.  I can still picture some of my favorites.  I say picture because those tins went missing after my grandmother died and have not yet been found.  Well, truth be told, I don't think that anyone ever searched for them and they are probably still stashed away in the house as my family still lives there.  One of these days I hope they'll find them.  Until then, I am destined, I think, to snatch up any buttons that I come across.
You're probably thinking - with all the buttons she claims to have, why are there only three on this card?  No reason other than this was the first idea that I had and that's all that was necessary.  I thought the swirly tree die would look good with some buttons, and would probably have added more if I had smaller buttons to choose from.  You can see that I added sticky pearls where buttons wouldn't fit.
The edge of the Night of Navy cs was stamped with a stamp from Autumn Days in VersaMark and then embossed with White EP.  A simple white ribbon was added at the bottom.  I wanted the tree to stand out so I kept this pretty simple.
I'll be back with a second card before the deadline on Wednesday.  If you'd like to get a head start checking out the entries for this challenge, click here.
Posted by Lorraine at 11:19 PM